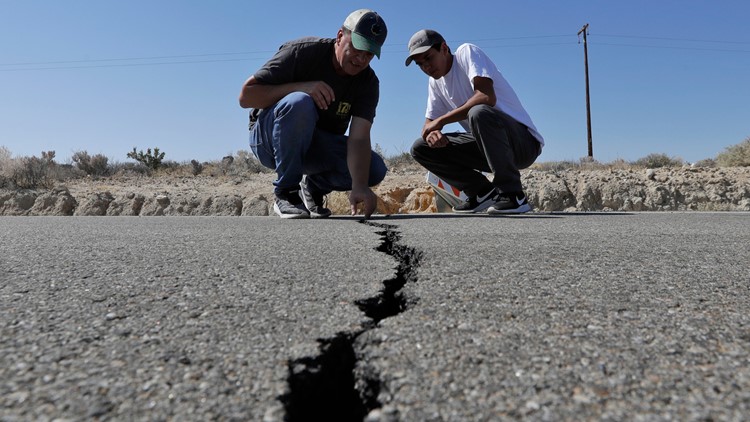 Photo by: AP Photo/Marcio Jose Sanchez/AP
Ron Mikulaco, left, and his nephew, Brad Fernandez, examine a crack caused by an earthquake on highway 178 Saturday, July 6, 2019, outside of Ridgecrest, Calif. Crews in Southern California assessed damage to cracked and burned buildings, broken roads, leaking water and gas lines and other infrastructure Saturday after the largest earthquake the region has seen in nearly 20 years jolted an area from Sacramento to Las Vegas to Mexico. (AP Photo/Marcio Jose Sanchez)

SAN DIEGO — This week's back-to-back quakes are not likely to trigger the "Big One" in Southern California, according to University of California San Diego scientists.

The two earthquakes that hit near Ridgecrest, a magnitude 6.4 quake on Thursday and a 7.1 temblor on Friday, were about 60 miles north of the San Andreas fault. Two UCSD seismologists tried to ease public concerns that the two quakes could trigger a catastrophic temblor on the southern San Andreas Fault.

RELATED: Understanding the probability of future earthquakes and aftershocks

RELATED: San Diego didn’t get a ShakeAlert. Here’s why we weren’t supposed to
"We've had large earthquakes -- like the Landers and Hector Mine events -- that occurred much, much closer to the San Andreas and didn't set if off," said Frank Vernon, a seismologist at UCSD's Scripps Institution of Oceanography, according to The San Diego Union-Tribune.

"So we don't believe that what happened over the past couple of days (in Ridgecrest) will affect the San Andreas."

The "Big One" refers to a 7.9 or larger quake that would rupture the San Andreas from Bombay Beach at the Salton Sea to the Cajon Pass and possibly all the way to Parkfield, in central California.'

On Sunday, Los Angeles County Board of Supervisors Janice Hahn was joined by seismologist Dr. Lucy Jones as well as experts from several LA agencies to provide an update on recent seismic activity in California and what that could mean for future quakes.

Scientists are trying to better understand the Ridgecrest earthquakes, which occurred fairly close to the surface, generating shaking that was felt throughout Southern California, including San Diego.

"These two quakes were definitely connected," said Debi Kilb, a Scripps seismologist. They involved two separate faults, the larger fault running perpendicular to the smaller one, forming a T-shaped pattern, she said.

"We're really lucky that these big quakes occurred in a remote place instead of an urban area, where they would have caused much more damage," Kilb said.

No teams from San Diego County have been dispatched to Ridgecrest to help assess damage following Friday night's 7.1 quake.

At the San Diego International Airport Friday, immediately after reports of the quake were received, the control tower dispatched inspectors in vehicles to check the runway for any damage, according to airport CEO Angela Shafer-Eayne. In addition, structural inspections inside the terminals for damage were conducted.

The inspections of the runway and terminals did not cause any flight delays Friday night, Shafer-Eayne said.

A San Diego Fire-Rescue spokesman said it is standard procedure after an earthquake for firefighters at each station to pull equipment out so that the structures can be inspected for any damage.

The quake struck about 8:16 p.m. Friday, about 9 miles west-southwest of Searles Valley in southwestern San Bernardino County, and occurred on the same fault that produced a magnitude 6.4 foreshock on Thursday, according to the U.S. Geological Survey.

Many aftershocks followed, the majority between magnitude 3 and 4. The USGS estimated a 3% chance of another earthquake of magnitude 7 or greater striking the region within the next week.

RELATED: Where was the earthquake ShakeAlert?

The chance of a quake of magnitude 6 or higher was estimated at 27%, and it is most likely that as many as two such quakes will occur.

The chance of a magnitude 5 or higher quake is 96%, with as many as eight likely to occur, the USGS said.

Seismologists say they anticipate between 240 and 410 quakes of magnitude 3 or higher.

"Prepare yourself for the next week to two weeks, this isn't going to stop in the near future," Ridgecrest Police Chief Jed McLaughlin told residents Friday night.

Ridgecrest's water system is intact without contamination, and all roads near the quake area are open, including State Route 178, which re-opened after emergency temporary repairs.

Trona, a small town in San Bernardino County, was without water Sunday.

As many as 50 structures were believed to have been damaged in Friday's quake.

RELATED: Strongest earthquake in decades a reminder that California is "way overdue" for the "big one," expert says

Gov. Gavin Newsom surveyed quake damage in the Ridgecrest area on Saturday and said he discussed the situation with President Donald Trump. Newsom has requested a presidential emergency declaration for direct federal assistance to further support emergency response and recovery in impacted communities and activated the Governor's Office of Emergency Services to its highest level. The state is also coordinating mutual aid to local first responders, Newsom said.

"I have all the confidence in the world that the president will be forthcoming in immediate terms with the federal declaration," Newsom said during a news conference following his tour. "We don't agree on everything, but one area where there's no politics, and we (have) worked extraordinarily well together is on emergency response and recovery, and increasing that emergency preparedness."