A pair of robbers held up a man and woman at gunpoint near UC San Diego early Sunday and forced them into their car, but left them scared by a warning shot and hiding a few blocks away. 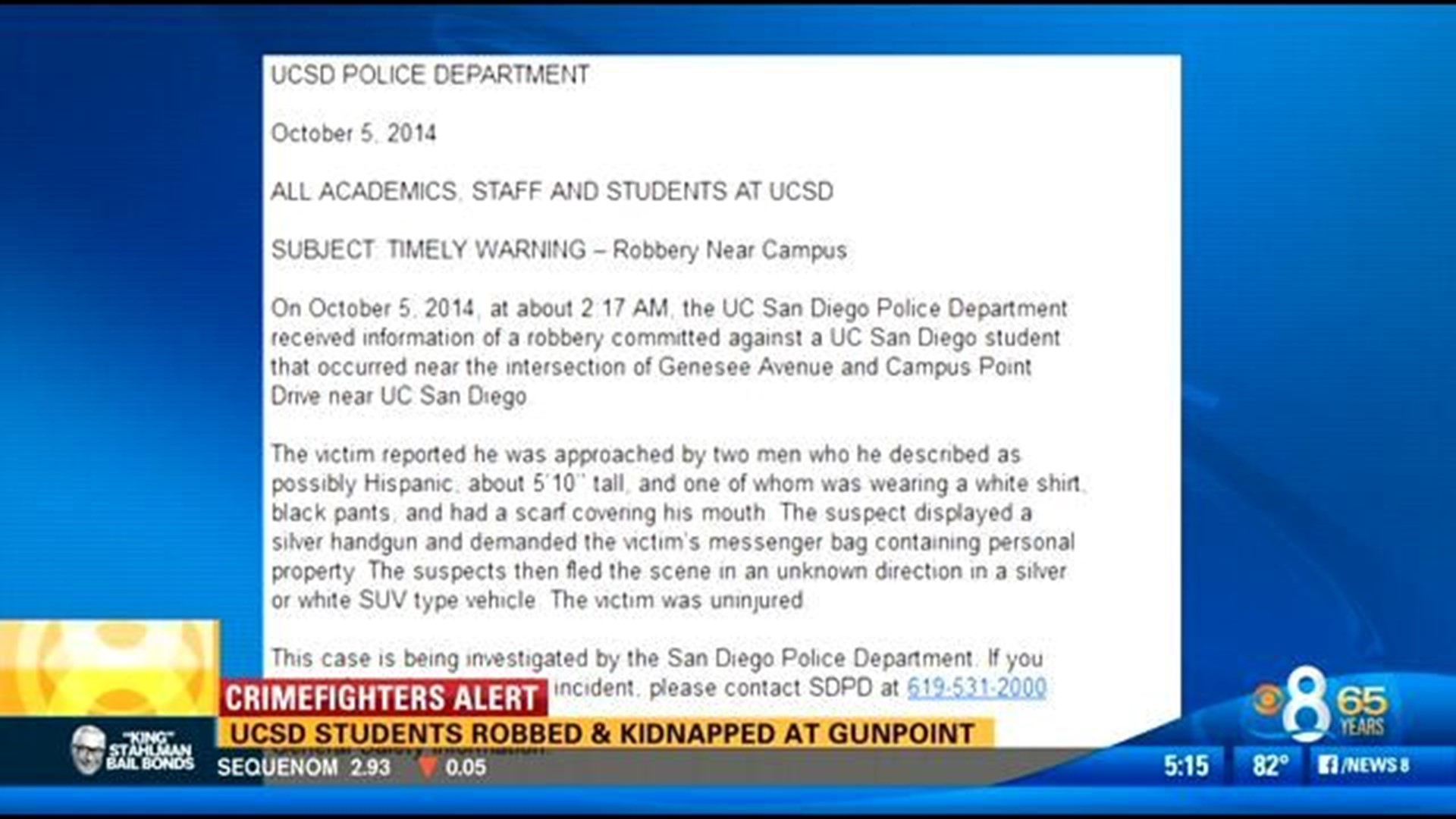 LA JOLLA (CBS 8) - San Diego police are on the lookout for two men who allegedly kidnapped and robbed a pair of UC San Diego students at gunpoint.

The students were approached as they were walking on the 9800 block of Genessee Avenue. They were then forced into a car and driven to the 10000 block of Campus Point Drive.

It's not something students and staff at UC San Diego say they'd expect to happen here.

"I mean, I trust that it's not scary area...there's nothing it seems like that goes on at night...just college kids walking around...you don't see too many sketch stuff," one student said.

According to San Diego police, a 22-year-old Asian male and a 20-year-old Asian female were walking south on the 9800 block of Genessee Avenue when they were approached by two Hispanic men in a silver Subaru.

The passenger allegedly pointed a handgun at the students and told them, "give me all you got." After handing over their backpacks, the suspect ordered them in the car adding, "or i'll shoot you."

The victims got in the backseat and were then driven a few blocks away to the 10000 block of Campus Point Drive, where the driver supposedly punched the male victim in the face, told them to get out of the car, before firing a gunshot into the air.

But that email only mentioned one student victim. It did not include anything about the kidnapping, the beating, or the gun being fired.

"I was shocked...I wasn't expecting anything because we just came here...we were transfer student and it's been only like a couple of days we've been here and then to hear that...it's very sad," Bhandari said.

CBS News 8 asked UC San Diego officials about that and were told San Diego police had more details because they're the investigating agency.

Meanwhile, those suspects are described as Hispanic men, both in their 20s, between 5 feet 9 and 5 feet 11 with medium builds. Both had their faces covered.

Police are looking into whether this robbery and kidnapping case is related to an armed robbery and carjacking in University City.