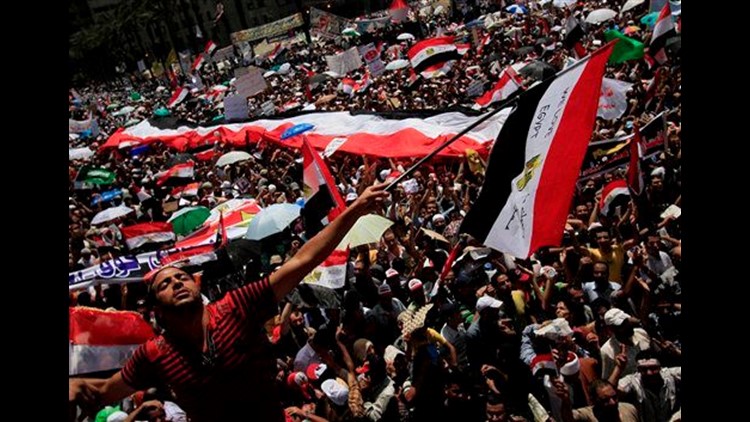 CAIRO (AP) — Ultraconservative Muslims turned out in force Friday as tens of thousands filled Cairo's central Tahrir Square in a rally marked by a growing rift in the protest movement.

In one of the largest crowds to fill the square since the popular uprising that ousted President Hosni Mubarak in February, Salafis chanted for the implementation of strict Islamic law — spurring accusations that they violated an agreement to keep the rally free from divisive issues.

The decision by the Muslim Brotherhood, Egypt's best organized political force, and other Islamist groups to participate significantly boosted the turnout. These groups stayed away from recent demonstrations that sought to keep up pressure on the military council that took power after Mubarak's fall, leading to smaller crowds.

But the Islamists' participation also highlighted the growing rift between them and liberal activists. Some Islamist groups rallied their members to the square to oppose the adoption of a set of guidelines for drafting a new constitution after parliamentary elections later this year.

Liberal parties endorse the measure in an effort to limit what they fear will be outsized Islamist influence on the new document should religious groups win a large share of the parliament. The Supreme Council of the Armed Forces has accepted the idea.

Islamists oppose it, saying nothing should restrict the right of the new elected parliament to oversee the process of drafting the document.

While opposing the measure, Muslim Brotherhood members did not press the issue Friday due to an agreement between organizers to avoid divisive issues.

Crowds of ultraconservative Salafis, however, gave a common protests chant an Islamic twist — sparking criticisms from others who said the chants violated an agreement to avoid divisive issues.

Instead of "Peaceful, peaceful," which demonstrators have chanted during confrontations with security forces, they repeated "Islamic, Islamic." And instead of "The people want to topple the regime" — a chant made famous in Tunisia and adopted across the region — they yelled, "The people want to implement Sharia," a strict form of Islamic law.

Salafis are ultraconservatives, close to Saudi Arabia's Wahhabi interpretation of Islam and more radical than the Brotherhood. They seek to emulate the austerity of Islam's early days and oppose a wide range of practices like intermingling of the sexes that they view as "un-Islamic." Many also reject all forms of Western cultural influence.

In the Sinai city of al-Arish, hard-line Salafis fired rocket-propelled grenades and other heavy weapons in the air during protests, injuring a small boy, according to an intelligence official who spoke on condition of anonymity because he wasn't authorized to release the information.

In the southern city of Assiut, deputy police chief Yosri el-Jammasi said Salafist protesters beat up a group of protesters from the Communist party trying to join their demonstration. At one point, some in the crowd yelled back at a speaker who criticized the idea of constitutional guidelines.

All protesters agree on a number of other key demands, including the end of military trials for civilians, a clear schedule for the transition to civilian rule and swift trials for former regime officials and those accused of killing protesters during the uprising, which left about 850 people dead.

The rally comes a day after Egypt's Justice Ministry said Mubarak, along with his two sons, his former security chief and seven others, will be tried at a Cairo convention center.

Of the 11, Mubarak, his security chief — former Interior Minister Habib el-Adly — and six top police officers are charged with ordering the use of deadly force against protesters. If convicted, the eight could face the death penalty.

Mubarak, his sons Gamal and Alaa and businessman Hussein Salem also face corruption charges. Salem, a close friend of Mubarak's, is at large.

The announcement had little apparent effect on Friday's protest, mostly because most activists doubt Mubarak will actually stand trial Wednesday as planned.

Mubarak's lawyer and doctors treating him in the Red Sea resort of Sharm el-Sheikh have repeatedly reported that the 83-year-old ousted leader's health is failing, though Egypt's health ministry said he is fit enough to stand trial.