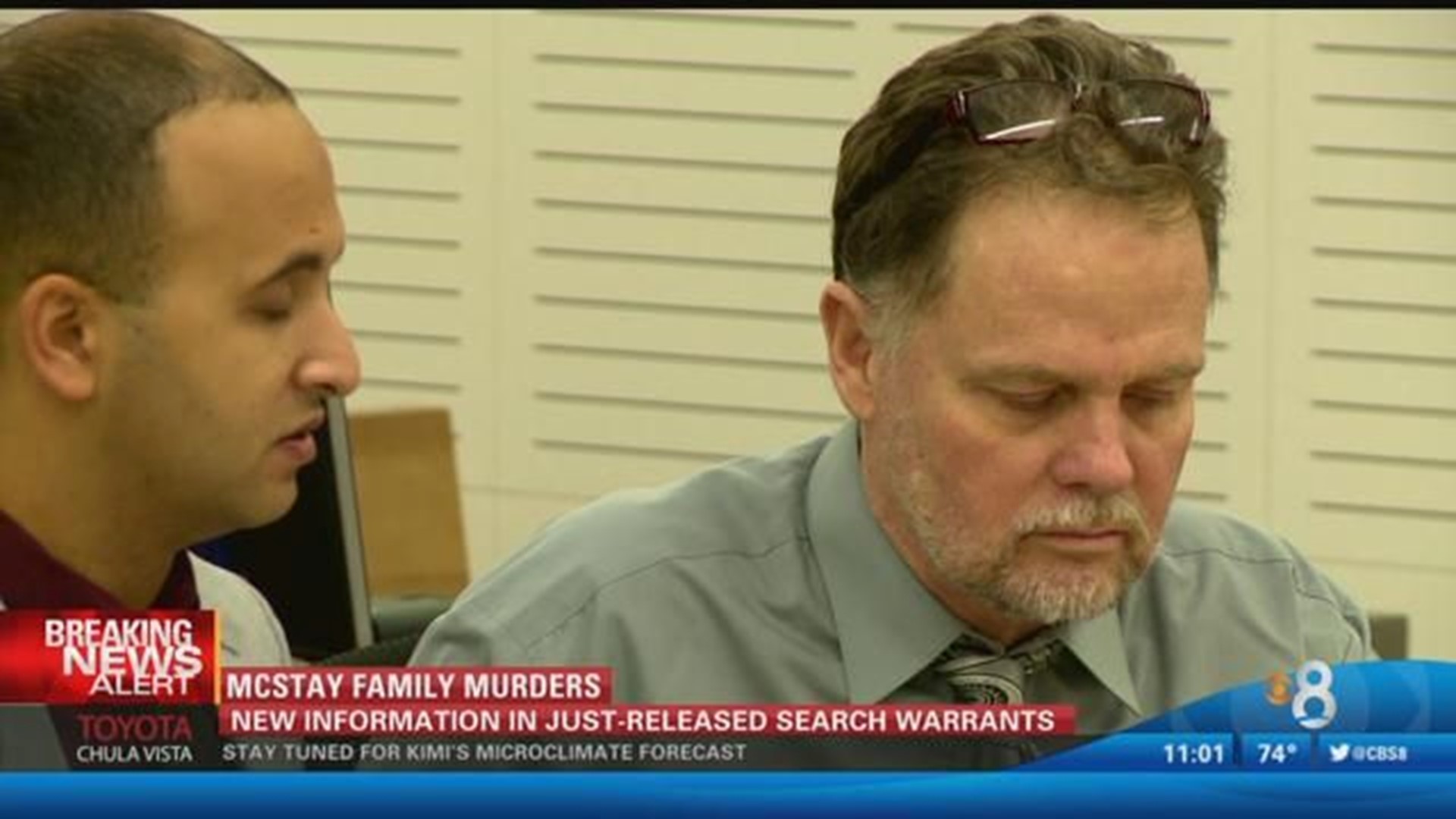 SAN BERNARDINO, Calif.  (CBS 8 / AP) -- A California man charged with murder in the killing of his business partner and the partner's family owed $30,000 to the victim, who planned to fire him, authorities said in court records released Wednesday.

A third business associate, Daniel Kavanaugh, also told investigators that McStay, who owned a water features business, was planning to fire Merritt, authorities said in 305 pages of search warrants and affidavits filed in the case.

Investigators also found quotes "to do with remorse, forgiveness and murder" while serving a search warrant at Merritt's home in October 2014, the documents show. The papers don't detail what the quotes were.

The records show how San Bernardino County investigators honed in on Merritt as a suspect after the family's remains were found in 2013 in shallow desert graves about 100 miles from their San Diego County home.

Merritt has pleaded not guilty to the murders of McStay; McStay's wife, Summer, 43; 4-year-old son Gianni and 3-year-old Joseph Jr. He was arrested last year.

The case initially puzzled investigators and for months it was considered a missing persons investigation. Authorities noted there were no signs of forced entry at the McStay home.

Authorities found the victims' remains along with a rusty 3-pound sledgehammer and a child's pants and diaper in San Bernardino County. Authorities said all four suffered blunt force trauma to the head, with Gianni receiving at least seven blows.

Detectives questioned Merritt two days after a missing persons report was filed, and noticed he referred to McStay in the past tense.

New information in the search warrants included the following:

-    Joseph McStay lent Merritt $30,000 to pay a gambling debt Merritt incurred.  Another business associate, Dan Kavanaugh, told San Diego County investigators that Joseph planned to fire Merritt.
-    Merritt told San Diego investigators he did not like Summer McStay or Dan Kavanaugh and stated, “If I were ever to commit murder, it would be him,” referring to Kavanaugh.
-    Investigators believed as recently as September 2014 that more than one person may have been responsible for the murders.  “It is probable there is more than one suspect involved in this investigation since an entire family of four was murdered and transported to the desert,” states one warrant written just prior to Merritt’s arrest.
-    Merritt was interviewed multiple times after the family’s disappearance on Feb. 4, 2010.  On Feb. 17, 2010 investigators noticed that “Merritt had a fresh injury to his hand, which he claimed happened when he cut his hand on sheet metal.”
-    Warrant 14-1848 states, “SDBSD investigators reviewed home video footage of Merritt associating with the McStay family.  This footage was found in the McStay’s residence after their disappearance and was time stamped a few months prior to their disappearance.  In this video footage, Merritt jumped over a fence and climbed a mountain next to the McStay home.  Investigators believe this video shows Merritt was in relatively healthy condition and Merritt’s statements of numerous injuries were exaggerated for investigators.”
-    When confronted by investigators about cashing checks from Joseph McStay's business account and making changes to the account using the online software QuickBooks, Merritt "admitted he tried to change the QuickBooks account and stated Joseph McStay instructed him to make the changes, though Merritt did not attempt to conduct the changes until days after their meeting and Merritt claimed he had already lost contact with Joseph McStay."
-    The McStay Fallbrook home was searched two times, first by San Diego Sheriff days after the family disappeared in 2010 and later in 2014 by San Bernardino Sheriff.  In 2010, San Diego Sheriff "did not believe there were signs of a struggle inside the residence.  The investigators photographed the residence to document how it looked at the time they served the search warrant and took items of evidence, such as electronic media devices and cameras that could be examined for additional evidence.  SDSO investigators were investigating a missing family and did not process the residence as a crime scene for latent evidence such as blood stains," according to warrant # 14-1075.  During the search of the home in 2014, San Bernardino Sheriff took DNA swabs and "a piece of tan colored carpet from the stairs."  By that time, new owners had moved into the Fallbrook home and the flooring had been replaced, according to testimony from the preliminary hearing.
-    The warrants disclose for the first time that San Diego Sheriff's investigators swabbed the McStay family trooper for DNA in 2010 and also obtained a DNA sample from Merritt.  Yet, inexplicably, it wasn’t until 2014 that San Bernardino Sheriff's investigators discovered a DNA match.
“During the missing person investigation, San Diego County Sheriff’s investigators learned that McStay’s Isuza Trooper was found and towed on February 8th, 2010, in a parking lot in San Ysidro.  Investigators towed the vehicle and authored a search warrant for the vehicle, during which they collected DNA swabs, fingerprint lifts and searched the vehicle,” according to warrant #14-1075.
“On Thursday, February 20th, 2014, Detective Armando Avila received a DNA analysis result report, for DNA swabs collected from the McStay’s Isuzu Trooper.  San Bernardino County Sheriff’s criminalists analyzed DNA samples collected from various items of evidence, including swabs collected from the Trooper.  During the analysis, criminalists matched DNA collected from the Trooper to Merritt.  Merritt’s DNA was collected during the missing person investigation by San Diego County Sheriff’s Detective Troy DuGal, via buccal swab.  The DNA swabs matching Merritt were collected from the steering wheel, 4x4 shifter, and radio/AC control panel,” the warrant stated.
-    "On Wednesday, October 22, 2014, investigators served a search warrant on (Merritt's) residence and seized several computers, electronic storage devices, notes for the McStay homicide investigation and several quotes to do with remorse, forgiveness and murder," according to warrant #14-1666.