A local Marine Corps veteran is speaking out about a loophole in the system that left him unable to provide for his family. 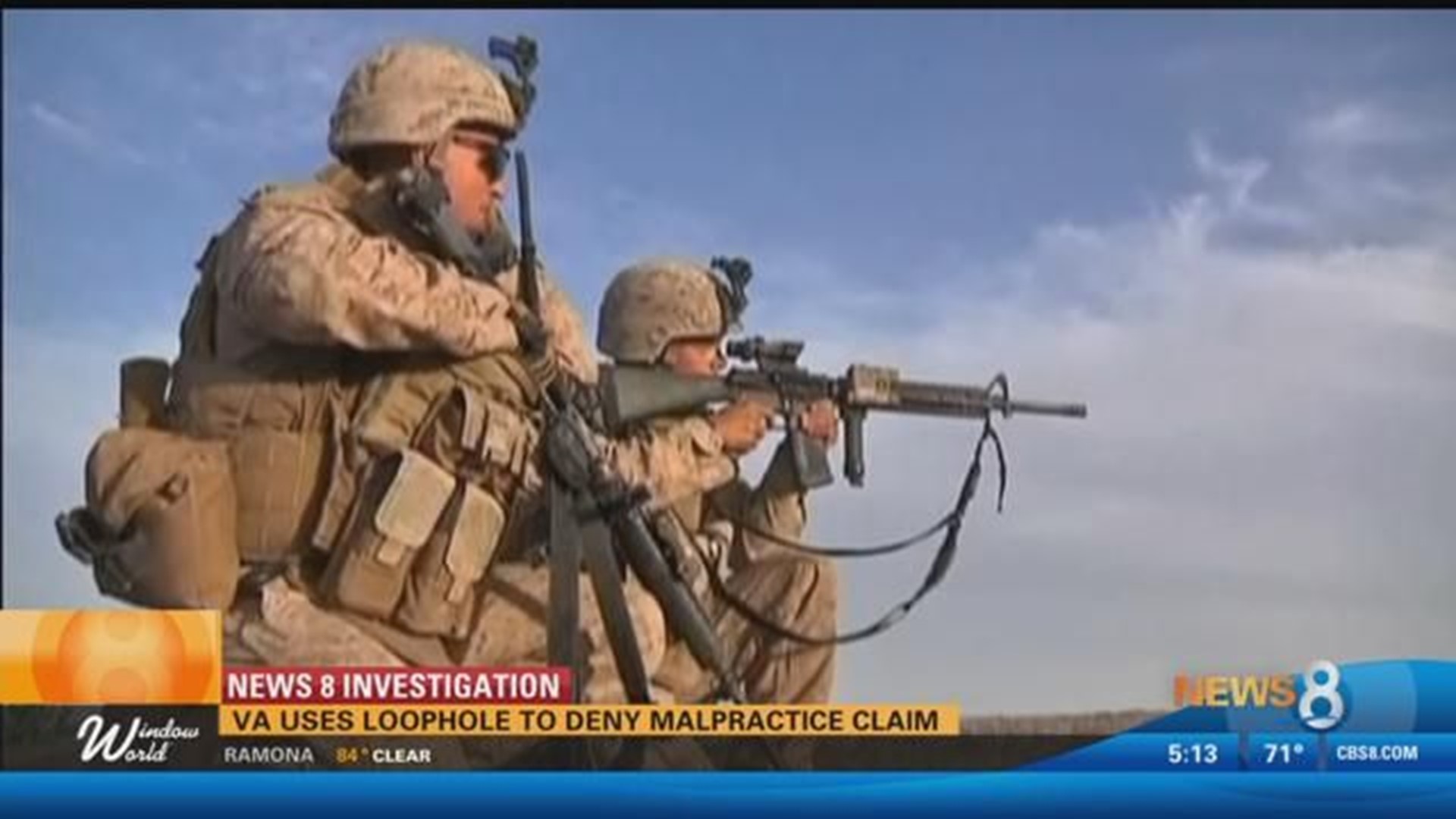 TEMECULA, Calif. (NEWS 8) -- A local Marine Corps veteran is speaking out about a loophole in the system that left him unable to provide for his family.

CBS News 8 investigated and discovered the same thing could happen to anyone who depends on medical care from the Department of Veterans Affairs.

“I joined the Marine Corps straight out of high school.  I liked what they stood for: honor, courage and commitment.  I wanted to be the best,” said Brian Tally of Temecula.

Tally was living the American dream two years ago, running his own landscaping business, and providing for his wife and family.

“We have four kids, from a daughter in college down to elementary school,” said Tally’s wife, Jenny.

In early 2016, everything changed for Brian Tally and his family.

“I went to bed on a Tuesday night, no problem, and then on Wednesday morning I couldn't get out of bed,” Tally said.

In a matter of days, Tally was on the floor with severe back pain.

“I couldn’t walk.  I just low-crawled everywhere.  When I did finally have to use the restroom, I laid on my side and I was peeing into a bucket,” he said.

Tally’s wife drove him to the emergency room at the VA Loma Linda hospital.  Doctors took a back x-ray and sent him home with a bag of pain pills.

“At that time of the x-ray, they told me that they didn't see anything wrong in my back and that I probably just sprained it,” said Tally.

When the pain continued, Tally made an appointment with his primary care doctor at the VA Clinic in Murrieta.

“She (Tally’s doctor) agreed with the original diagnosis of a low-back sprain and told me it would take a couple of weeks; so go home and stretch and relax, and take a couple weeks off,” recalled Tally.

Looking back, Tally believes the VA doctors should have ordered a simple blood test.  It would have uncovered what was wrong with Tally much sooner.

“We ended up going on our own and getting a MRI to find out what was going on with him since they wouldn't do one,” said Jenny Tally.

The $500 MRI – which the Tally family paid for out-of-pocket at a private imaging facility – showed Brian Tally needed surgery and there was no time to wait.

It already had been four months since his back pain began.

When the VA’s orthopedic department told Tally he would have to wait nine months to schedule surgery, he applied to get into the Veteran’s Choice Program (VCP).

VCP allowed Tally to schedule surgery at a private facility in just four weeks.  “The surgery was completed at Scripps Mercy Hospital in San Diego,” he said.

A blood test associated with the operation revealed Tally had been misdiagnosed months earlier.

“I tested positive for a bone eating staph infection that aggressively attacked my spine,” he said.

That bacterial infection left Brian with permanent disability, including bone, tissue, and nerve damage.  He now has screws in his spine.

Because of the initial misdiagnosis and associated delay in treatment, Tally filed a claim for damages with the VA.

Initially, Tally was optimistic about his claim.  He said attorneys for the VA seemed sympathetic and spoke to him frequently on the phone over the course of many months.

His case lingered on for more than a year, until finally a VA letter denying his tort claim arrived in the mail.

The letter claimed the government was not to blame for Tally’s injuries because his primary care physician was a private contractor.

“My providing physician was not a VA employee.  She was an independent contractor working for the VA,” Tally said.

The statute of limitations to file a malpractice lawsuit against the VA is normally two years.

But since Brian's doctor was a private contractor, the statute of limitations to sue her in California had already run out.

That’s when Tally decided it was time to hire Virginia attorney, Glen Sturtevant.

“He sought out medical care from his local VA hospital and they basically blew him off,” said Sturtevant.

Many vets don't know the legal ins and outs of VA doctors and private contractors, according to Sturtevant.

“Veterans and their family members, as they're going to the hospital or clinic, don't know who’s a contractor and who's an employee,” he said.

And, Brian Tally’s case is just one of many.

“There are veterans right now that may have a case of malpractice or negligence, who think they have two years to file a claim, when maybe they only have one year because the VA system is full of independent contractors,” Tally said.

VA Loma Linda employs more than 120 private contractors, according to a spokesperson, who declined to answer questions about Tally’s case.

“Due to the Veteran’s right to privacy, it would be inappropriate to comment at this time,” said Wade Habshey, a public affairs officer with the VA Loma Linda Healthcare System.

Tally currently is working with Congressman Duncan Hunter’s office to draft legislation that would require the VA to notify veterans when they receive medical care from a private contractor.

Tally also has set up a GoFundMe page to help raise money to support his family and pay for legal expenses.

“I’m speaking out for all veterans in this country,” he said.  What happened to me has been a nightmare.”

“For the last two and half years, I’ve seen zero accountability from the VA in dealing with this case,” said Tally.