A video has gone viral of a woman showing off her absentee request form covered in Trump campaign signage. Our experts tell us this is completely legal. 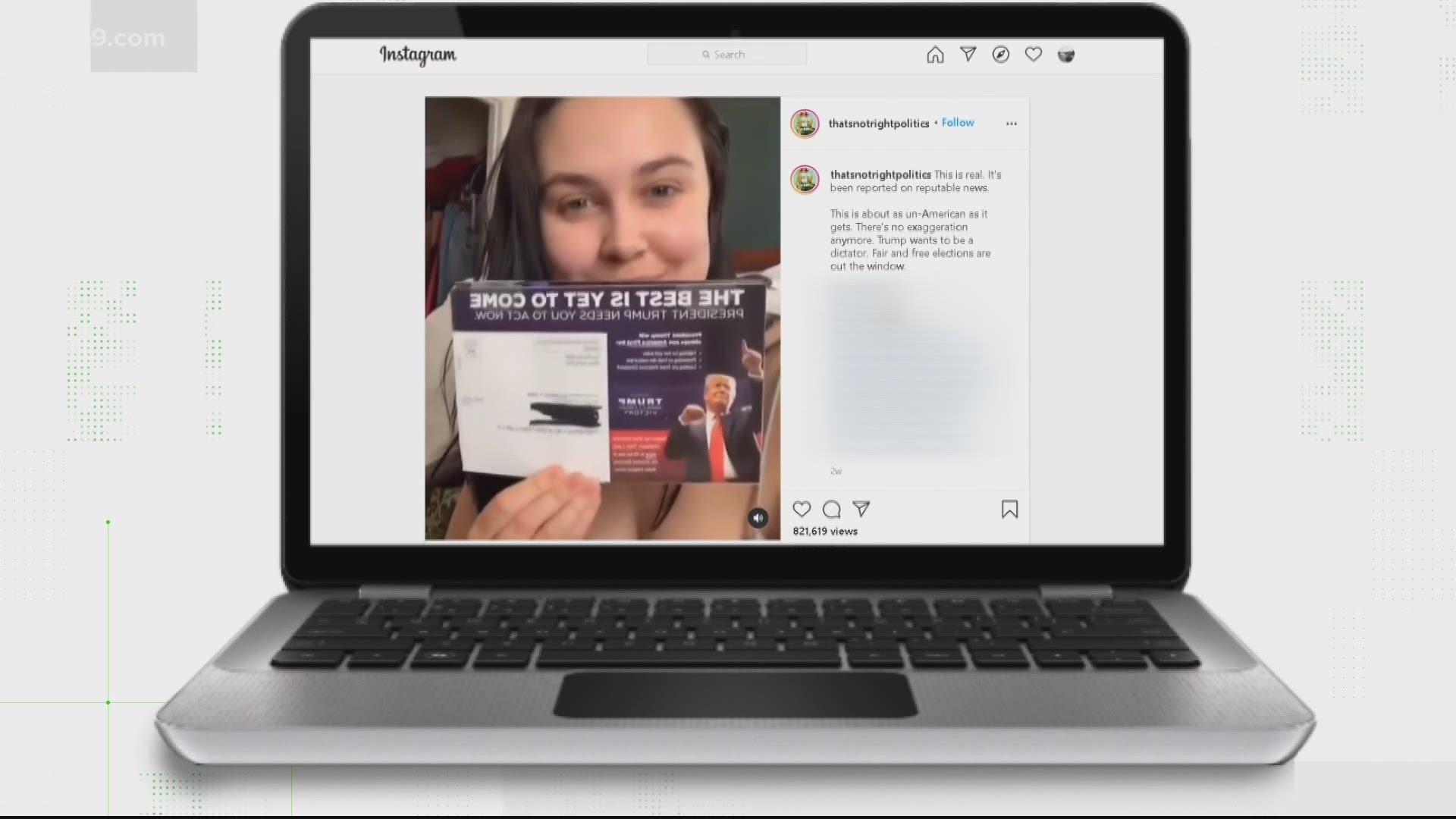 WASHINGTON — Many Americans are navigating how to vote from home for the first time ever this election season. While voters are learning the ropes, campaigns and advocacy groups are adjusting to a new kind of mobilization that's causing some confusion online.

Are states or counties sending out absentee ballot request forms enveloped in Trump campaign mailers, as seen in this Instagram video?

NO. The request form in question is almost certainly sent out by a third party, not a county or state official. This is legal in most states.

Audrey Kline, policy director for The National Vote at Home Institute, described on their website as "the nation’s foremost organization on mail ballot use and administration."

Lonna Atkeson, director of the Center for the Study of Voting, Elections and Democracy at the University of New Mexico, and advisory board member for the MIT Election Data and Science Lab.

A viewer reached out to the Verify team with a link to an Instagram video in which a woman shows off her absentee ballot request form. But you wouldn't know that upon first glance.

“I almost threw it away, because this is what it looks like," she said as she shows the outside of the mailer — a photo of Donald Trump with the words 'The best is yet to come.' "This looks like an ad for Donald Trump."

The original video was posted on TikTok but has since been deleted. Our Verify researchers were unable to track down the original poster's account. The video is still circulating on other social media sites.

After unfolding the mailer several times, she finds an absentee ballot request form in the center and asks, "How is this allowed?"

We took that question to two experts: Audrey Kline, with The National Vote at Home Institute, and Lonna Atkeson, an election science and administration expert.

They both watched this video and came to the same conclusion — this absentee ballot request form was sent out by a third party, not a government official.

"Counties do not send request forms with any sort of candidate information on them whatsoever," Kline said. "They are completely nonpartisan and that would be illegal on several levels. But a third party, such as a campaign, a PAC or super PAC, it is legal for them to send that official request to you."

Atkeson agreed, and explains that many of us are not used to this because campaigns and mobilization groups are adjusting to an election season focused on voting from home.

So we can verify that no, this mailer did not come from a state or county government official. And yes, third parties are legally allowed to send out absentee ballot request forms in most states.

Our experts also told us that the request forms sent out by third parties, despite any messaging on the outside, often contain the exact same request form you would receive from your county officials.

"You can still use them, they are absolutely valid," Kline said. "As far as I've ever seen, I've never seen one that isn't going to work."

Atkeson told the Verify team during a Zoom video interview that she collects election mail for her research, and she happened to have an official county-administered ballot request form AND a request form sent out by the Trump campaign.

She held them side by side and there was no difference.

"So they just printed the applications, see? They're the same," Atkeson said while holding the forms side by side. "So you can see that they're the same. It's just the groups trying to mobilize voters."

Even though, yes, these third party absentee ballot request forms will likely have a working application, Kline still said that voters' best sources of information are their local election officials.

"They know the rules in your area," she said. "They have the tools and the resources that you need to make sure that your vote is counted. So if you see anything come from a campaign or a PAC, if you're just not sure, we highly recommend you just go to your local website or give them a call."