VERIFY: Have 'murder hornets' come to the DMV? 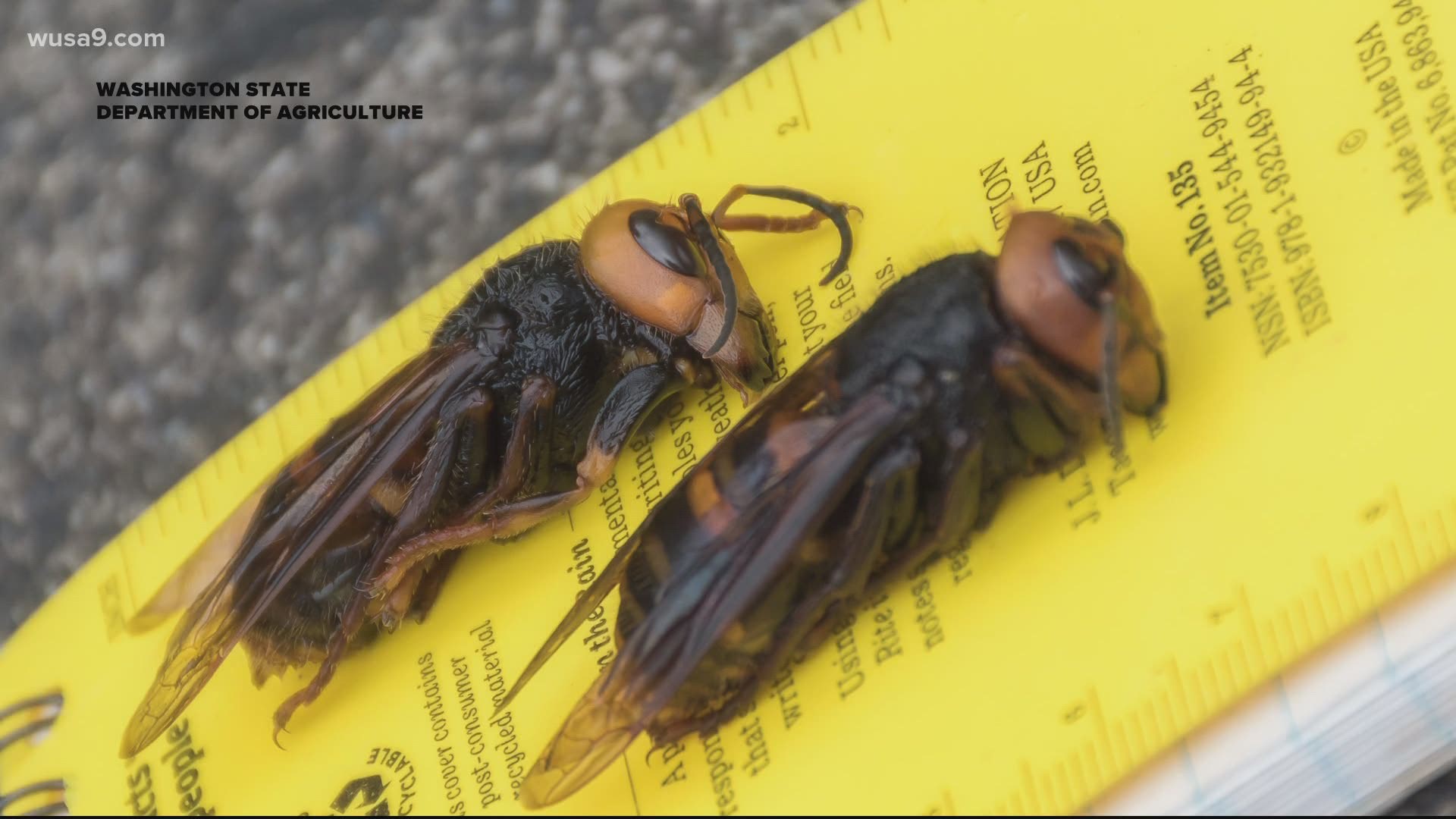 Have Asian giant hornets been spotted in the DMV?

Natasha Garcia-Andersen: Wildlife biologist at the DC Department of Energy and Environment

Michael Raupp: Professor of entomology at the University of Maryland

In December, officials in Washington State said they had confirmed sightings of the Asian giant hornet, which they say is a first in the United States.

That’s a big deal, because these bugs -- recently nicknamed "murder hornets" --decapitate bees and destroy hives, according to the Washington State Department of Agriculture.

They’re about two inches long, they can sting repeatedly, and their stingers are bigger and their venom more toxic than honeybees, according to the Washington State Department of Agriculture.

On social media there’s lots of fear, so we're verifying whether there have been any confirmed sightings in the DMV.

Officials from all three jurisdictions say there are no confirmed sightings of the wasp here. However, Virginia officials say they’ve had reports from people who think they’ve seen the murder hornets in the state.

JM Jimenez from Spotsylvania County, Virginia sent us a video of what he thought was an Asian giant hornet.

The Verify team showed it to officials at the Virginia Department of Agriculture and Consumer Services who said it actually appears to be a European hornet.

RELATED: VERIFY: Can your boss force you to quit a second job during a pandemic?

Credit: Washington State Department of Agriculture/ JM Jimenez
A side-by-side comparison between the Asian giant hornet (left) and what's likely a European hornet, sent to us by a viewer (right).

Natasha Garcia-Andersen, a wildlife biologist at D.C.’s Department of Energy and Environment, said that while the hornets are not in the District, if they did manage to get here, since it’s a highly-populated area, they’d probably be spotted before they could do any real damage on local bees.

The District is home to about 400-500 manmade beehives, Garcia-Andersen said.

"Don't go crazy spraying and killing everything," Garcia-Andersen said. "It's not here. If you see something that you're really worried about, snap a picture, send it to us, we'll take a look at it. But don't just go haphazardly spraying everything that looks menacing to you."

So we can Verify, no, there haven’t been any sightings of the Asian giant hornet in the DMV.

But technically, could they spread and survive in our climate?

"They’re in parts of Russia, China, Japan, Sri Lanka, Nepal, India, so I think that range of conditions...they would be totally suitable for colonization by this particular giant hornet, right here in the Mid-Atlantic region," Michael Raupp, a professor of entomology at the University of Maryland, said.

Raupp said that even though they could survive in our area, it could take years, even decades for them to naturally migrate to the East Coast. The only way they could get here faster, he said, is if they come through a nearby port of entry.

"It would take a reintroduction, in other words, another container ship perhaps from Asia that arrived in Baltimore, and inside the container ship were impregnated female wasps, they could then get out and establish here on the East Coast," Raupp said. "But given they're so far out in the West and given their natural rate of spread, I would say it would be many years... before they moved from the West Coast, all the way over to the DMV."

RELATED: VERIFY: May 5th is a crucial deadline for those on SSI or getting VA Benefits