VERIFY: Is this check and advertisement offering $500 a week to wrap your car legit?

A Virginia woman received a $3,730 check to wrap her car in a yogurt ad. Is it a legit offer? 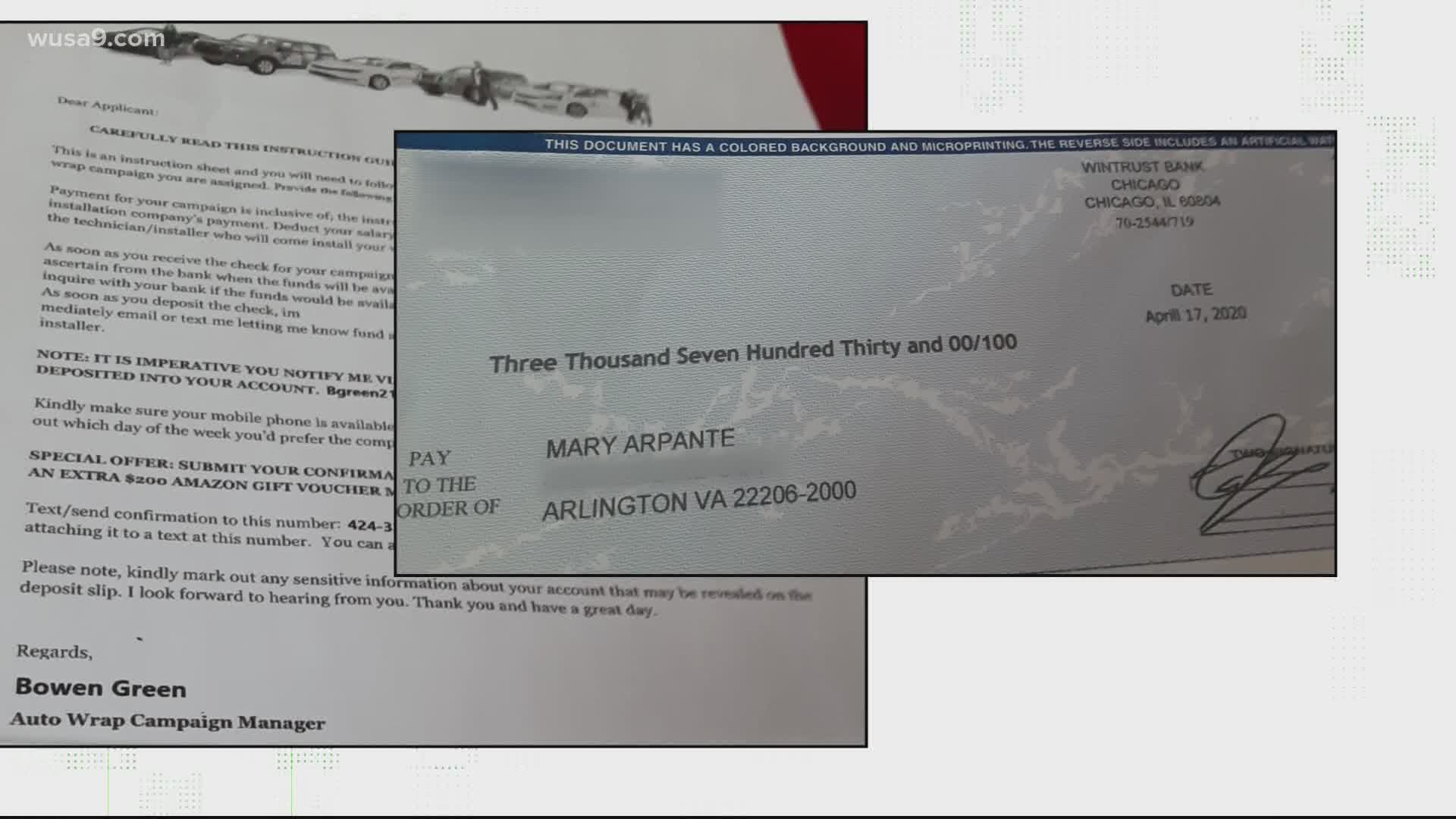 A Virginia woman received a check for $3,730 after clicking on a job posting to wrap her car with a yogurt advertisement. She was instructed to deposit the funds within 24-to-48 hours. She was then told to email a confirmation the funds were deposited and pay a car wrapping specialist with some of the money. Is this $500/week part-time job a legitimate offer?

The check is fake, the offer is not legit.

The CEO of the company named on the check confirmed they did not generate the check, nor are they affiliated with any car wrap company.

WUSA9 viewer Mary Arpante from Arlington, Virginia, has been a teacher for more than 30 years, but because of the pandemic, she says she's furloughed.

Looking for a part-time job, Mary answered an online ad that said she could get paid $500 a week to "wrap," or put an advertisement, on her car.

But when a letter with a check for $3,730 arrived, she got suspicious and contacted the Verify team.

Credit: Mary Arpante
An Verify viewer reached out to the team after responding to an ad online and receiving a check for $3,730

So, we're verifying: Is this offer legit?

You’re told to deposit a check and keep some for yourself, then send the rest to a specialist who will do the work on your car.

The specialist never shows, the fake check bounces and they make off with your money.

The Better Business Bureau has received nearly 600 reports involving car wrapping scams in the U.S. in the last five years.

Kelsey Coleman, a spokesperson for the BBB's D.C.-metro branch, says the letter and instructions Arpante received fit the pattern typical of employment fraud.

“They wanted her to cash this check to go buy her supplies, and that’s a big red flag when it comes to employment schemes, because you should never have to cash your check to then go buy a computer or send money to someone else," Coleman said.

Credit: Mary Arpante
The letter attached to the check included a phone number. When our Verify researchers called, they were hung up on twice.

Our Verify researchers called the number listed on the letter, and were hung up on twice.

We also contacted the company name listed on the upper right hand of the check.

The CEO told us they did not issue the check and they are in no way affiliated with any car wrap company.

So we can Verify this check is not legit, our researchers told Mary not to deposit it.

RELATED: VERIFY: Electricity companies in the DMV won't call to refund you $150, offer discounts or ask for account information

RELATED: VERIFY: Is mobile pay safer than paying with your credit card?