Lava from the Kilauea Volcano continues to carve a path of destruction on the Big Island of Hawaii. More fissures opened up Tuesday prompting new evacuation orders. 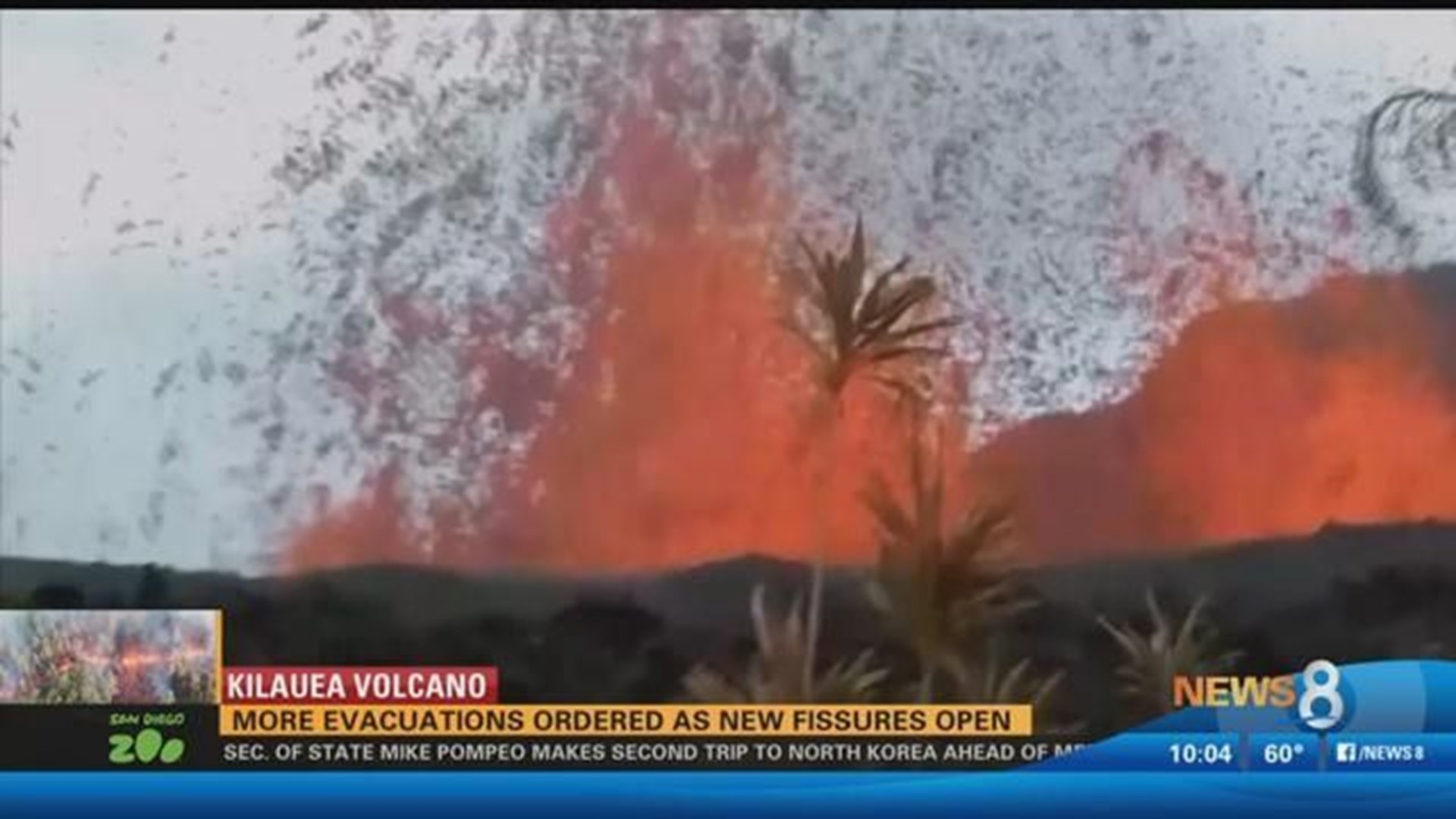 PAHOA, Hawaii (AP) — Police went door-to-door in Hawaii to roust residents near two new volcanic vents emitting dangerous gases in areas where lava has poured into streets and backyards for the past week.

Authorities had ordered nearly 2,000 residents to leave the two communities in the mostly rural district of Puna on Hawaii's Big Island last Thursday. But some ignored the order and stayed to watch over their property.

But on Tuesday, the emergence of the two new vents prompted Hawaii County to issue a cellphone alert ordering stragglers in the Lanipuna Gardens neighborhood to get out immediately. Police followed up with personal visits.

Officers found a number of people still at their residences but there were no sign of holdouts later, said Talmadge Magno, the administrator for Hawaii County Civil Defense.

Edwin Montoya, 76, had planned to stay to care for animals and keep looters away from his family's property in the nearby Leilani Estates. But he was forced to evacuate after the new fissures emerged, including one just a mile (1.6 kilometers) away.

"I'm in my truck right now on my way up the road," he said. "The police came down here and made me."

Both communities are in a forested, remote part of the Big Island on the eastern flank of Kilauea volcano, which has been erupting continuously since 1983.

In recent years the volcano has mostly released lava in hard-to-reach areas inside a national park or along the coastline. But last week, vents popped open and released lava, gas and steam inside residential neighborhoods.

There were about 1,700 residents in Leilani Estates and a few hundred in Lanipuna Gardens before last week.

Andrew Nisbet has no idea what's happened to his house since he left it last week.

"My home is right in the line of the major breakouts so maybe, maybe not." he said Monday during a community meeting.

Authorities urged Scott Wiggers to evacuate, but he refused.

"I'm in the safest part in the subdivision. There's no threat to my house whatsoever," said Wiggers, a tour guide.

Wiggers said he wasn't leaving his home on the outskirts of the evacuation zone because he worried that if he did, he wouldn't be able to get back in. But he's prepared in case the situation takes a turn.

Officials warn that lava could flow downhill and burn areas that don't currently face danger and that toxic volcanic gas could kill people, especially the elderly and those with breathing problems.

Hawaii Gov. David Ige, a Democrat, told evacuees he has called the White House and the Federal Emergency Management Agency to tell officials that he believes the state will need help to deal with the volcano on the Big Island.

There are 14 lava-and-gas producing fissures in Leilani Estates, after the two new ones formed Tuesday. But the flow of lava is not constant.

Thirty six structures have been destroyed and 26 of them have been confirmed as homes. Aerial surveys have not determined whether the rest of the structures are homes or other types of buildings.