Your Stories: Neighbors fed up with speeding dirt trucks

East County residents off Wildcat Canyon Road are fed up with speeding truck traffic from a nearby housing development. 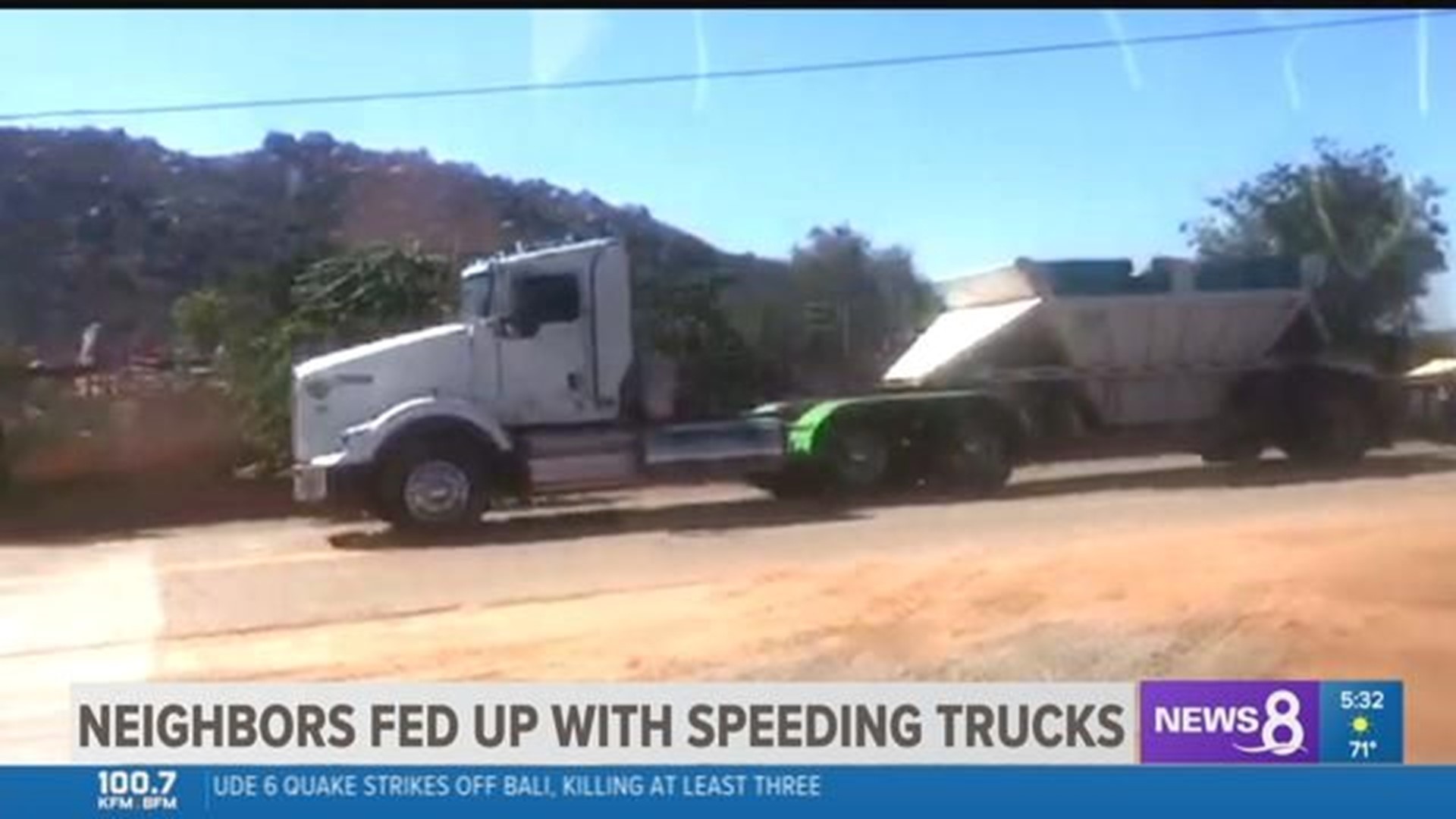 LAKESIDE, Calif. — East County residents off Wildcat Canyon Road are fed up with speeding truck traffic from a nearby housing development.

In this Your Stories investigation, News 8 responded to neighbor complaints with a camera and a radar gun.

Shaun Frude has lived in Lakeside and the East County for the past 30 years.  His scenic parcel on Muth Valley Road used be nice and quiet but not anymore.

“This is my sign.  I'm trying to let everybody know to slow down,” said Frude as he showed off the red and white sign he posted roadside on his property.

Frude and his neighbors have been dealing with the rumbling noise of construction trucks hauling dirt to and from the nearby Trevi Hills development.

“It's a constant trouble with trucks speeding through here with dirt; really heavy loads starting at 7 a.m. All the way until 3 o'clock,” he said.

“I've tried to have them slow down and I've actually been flipped off before,” Frude said.

Other neighbors describe close calls between the speeding trucks, pedestrians and animals.

“Many of them are going at least 45 miles per hour.  I've encountered many trucks on my horse.  I'm an avid rider,” said neighbor Ron Kasper.

The speed limit on Muth Valley road is 25 miles per hour.

Using a radar gun on one morning, News 8 clocked various dirt trucks driving between 32 and 38 miles per hour through the neighborhood.

The Trevi Hills housing project is advertised as a tranquil estate development with its own winery next door.

“I actually love this development.  I think it might bring value to this area and there's a winery down the street.  We go there and we've met these folks and they're really nice people,” said Frude.

Built by Pacifica Companies based in San Diego, the Trevi Hills development eventually will include about 250 homes.

Thank you for reaching out to me regarding our Muth Valley neighbors’ concerns about our hauling on Muth Valley Road.   We share their concerns about speeding on Muth Valley Road, and will re-double our efforts to assure that all drivers respect the speed limit and the safety and well-being of our neighbors and their animals.  We are committed to respecting our neighbors and the special neighborhood that is Muth Valley, and promise to make every effort to meet those obligations.  We understand that construction activity can be disruptive, and for that we apologize.  We promise to do better.  In addition, we will set up a hotline to report any speeding or unsafe driving and provide that number to everyone in Muth Valley.

If you have a story you'd like News 8 to look into just send us an email at yourstories@kfmb.com