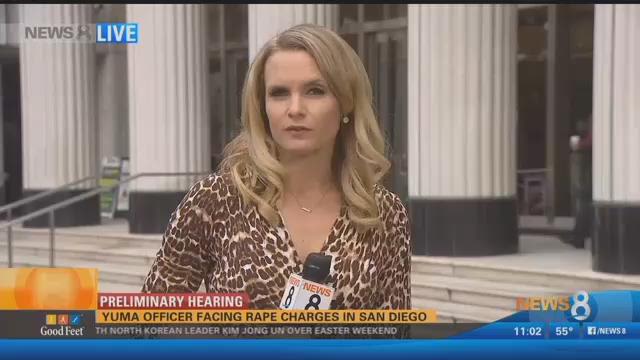 Elkins, who is related to the woman by marriage, was staying at the woman's Kensington house in September. Elkins, the victim, and two other family members went to dinner and then watched a movie while drinking beer and wine at the house before the alleged assault occurred, according to the woman.

The alleged 23-year-old victim offered emotional testimony on Thursday detailing a series of sex acts she says Elkins physically forced her to participate in as she pled for him to stop.

"At several points in this whole night I said 'no,"' the woman said.

He kept going despite that, she said. The woman stiffened her body, resisted Elkins' physical manipulation, pushed him away and feigned sleep in a bid to get him to stop throughout the ordeal, she said.

"I was thinking as a trained law enforcement officer if (my) saying 'no, please stop' wasn't indicative enough that I was not consenting to this sex then yes, wriggling around" would indicate that, the woman said.

The two other family members were asleep in the house so small "you can hear someone breathing in the next room," the woman said. During the alleged assault, the woman asked Elkins what would happen if she cried out for help.

She took that and Elkins' second death threat that night very seriously -- Elkins was known by family members to carry his handgun off duty and he left the weapon resting in full view of passersby on top of his suitcase during his San Diego visit, the woman testified.

After the incident, the woman waited before going into a family members' room for help around 4 a.m. The pair fled the house through a bedroom window and the family member called police, the woman said.

The woman underwent a sexual assault examination at Palomar Hospital, where her blood alcohol level was determined to be 0.09 percent, according to witnesses testimony.

Elkins, who has been with the Yuma Police Department for seven years, posted $250,000 bail and was released from custody after his Sept. 15 arrest.

He was placed on paid administrative leave by the department and later resigned in January, according to the Yuma Sun newspaper.

Elkins' was arraigned and pled not guilty on Thursday to a new charge, forcible digital penetration.

Elkins' attorney Trip Johnston argued that the forcible charges conflicted with those related to the woman being intoxicated. But Superior Court Judge Melinda J. Lasater said Johnston could argue that point at trial.

He faces 14 years in prison if convicted, according to Deputy District Attorney Lisa Fox.

Elkins is next scheduled to appear in court on May 9.