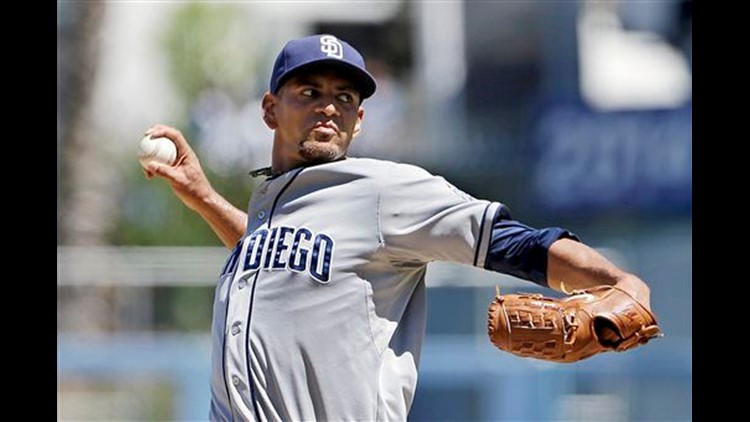 The NL West leaders earned their 10th sweep of the season and first against San Diego. They extended their roll from August, when the Dodgers went 23-6 for their most wins in a month since moving to Los Angeles in 1958.

Greinke (14-3) won his sixth straight start for the first time since winning nine in a row over the 2008-09 seasons. The right-hander gave up two hits, struck out seven and walked two. Greinke, who came in batting .340, also singled with two outs in the fifth.

Puig hit his 14th homer into the left-field pavilion on the first pitch he saw from Dale Thayer (2-5) with one out in the sixth, giving the Dodgers a 2-1 lead. The sellout crowd of 52,168 cheered the 22-year-old Cuban defector on Cuban Heritage Day.

Kenley Jansen retired the side in the ninth, including two strikeouts, for his 24th save in 27 chances.

San Diego had the potential tying run on third in the eighth after Reymond Fuentes singled, went to second on a wild pitch by Ronald Belisario and advanced to third on a groundout.

Paco Rodriguez came in and struck out Will Venable before pinch-hitter Chris Denorfia grounded back to the mound. The ball bounced off the pitcher's glove before Rodriguez chased it down and threw out Denorfia to end the inning.

The Dodgers tied the score at 1 in the third on Mark Ellis' RBI single with two outs that scored Carl Crawford, who doubled.

San Diego went ahead in the top of the third on Alexi Amarista's two-out RBI single that scored Fuentes, who walked, got sacrificed to second and stole third.

Fuentes singled in the eighth for his first major league hit.

Padres starter Tyson Ross gave up one run and five hits in five innings. He struck out a career-high 10 and walked one.

The Padres were limited to their fewest hits in the three-game series after getting 11 on Friday and 10 on Saturday. They lost for the sixth time in eight games.

The teams meet once more later this month in San Diego.

NOTES: Newly acquired INF Michael Young will join the Dodgers on Monday in Denver, where they open a six-game trip that includes three games in Cincinnati. ... The Dodgers recalled C Drew Butera, SS Dee Gordon, RHP Stephen Fife, RHP Peter Moylan and 1B-OF Scott Van Slyke from Triple-A Albuquerque. All but Butera have seen time with the big club this season. Butera will be making his Dodgers debut after being acquired from Minnesota last month. ... Dodgers manager Don Mattingly said OF Matt Kemp and RHP Chris Withrow will join the team at some point. Kemp has been used as the DH as he rehabs a sprained left ankle at Class-A Rancho Cucamonga, where he was 0 for 11 with five strikeouts going into Sunday. "I know he doesn't feel good yet at the plate," Mattingly said. ... The Padres recalled C Chris Robinson and LHP Tommy Layne from Triple-A Tucson.