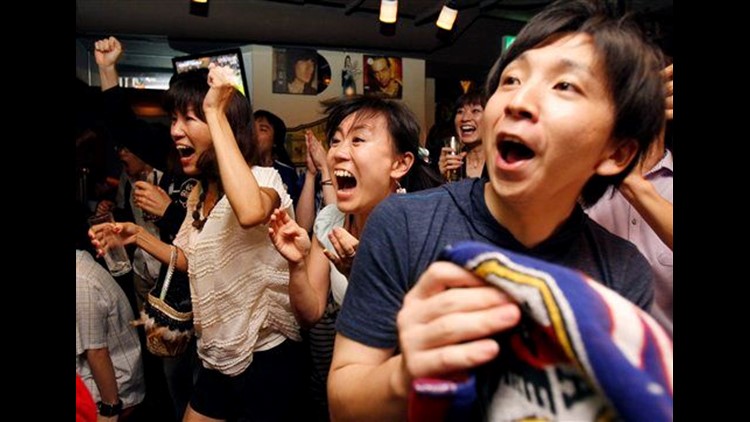 TOKYO (AP) — This Japanese flower bloomed just when the country needed it most.

A nation reeling from months of tragedy united in joyous celebration Monday after its women's soccer team — nicknamed "Nadeshiko" for a pink mountain flower — won the World Cup by beating the United States.

Fans decked out in the team's dark blue colors hugged and sang in Tokyo as they watched the players lift the World Cup on live TV broadcasts from Germany.

On Tuesday morning, thousands of joyous, flag-waving fans turned out to greet the team as they arrived home, and two fire trucks shot out celebratory arches of water over the team's aircraft as it approached the terminal at Tokyo's Narita Airport.

Goalkeeper Ayumi Kaihori was the first to come through the terminal. The rest of the team, wearing their gold medals, followed as cameras flashed and fans shouted "Omedeto Gozaimasu"— congratulations.

Prime Minister Naoto Kan called the victory the "greatest gift" to the nation, especially to the residents of the northeast coast most devastated by the March 11 earthquake and tsunami. The twin disasters left nearly 23,000 people dead or missing and caused partial meltdowns at a nuclear power plant that added to the tragedy.

The "Nadeshiko" mountain flower is believed to be a symbol of femininity in traditional Japanese culture. But some fans said the players defied the traditional feminine role with their tough playing style.

The team, which had to come back twice from one-goal deficits, demonstrated courage by playing "a diehard match even when they were on the back foot," Kan said in the statement carried by Kyodo news agency.

Defense Minister Toshimi Kitazawa said the victory will encourage those working to help Japan bounce back.

"I'm delighted. The team showed great perseverance and sent a good message toward recovery from the major disaster," Kyodo quoted Kitazawa as telling reporters in Aomori.

Japan's players used the disasters as motivation throughout the tournament, watching pictures of the devastation from their homeland before some matches.

The team displayed a banner reading "To our Friends Around the World — Thank You for Your Support" before the final.

Added Toru Komatsu, 22: "This is a chance to forget the nuclear disaster and everything else, to just to unite and celebrate."

Japan became the first Asian nation to win the Women's World Cup, beating the U.S. 3-1 in a penalty shootout after a 2-2 draw.

Bars and restaurants that showed the game live in central Tokyo were packed for the kickoff at 3:45 a.m. local time Monday — a national holiday. At some venues, dozens of fans stood in the street and watched through the windows of crowded establishments.

After the victory, chanting fans spilled into Tokyo's streets. In Shibuya, a neighborhood known for its youth pop culture, dozens of police kept a small group of boisterous fans from wandering out into traffic.

Special edition newspapers proclaiming the victory were printed by the national papers and handed out to pedestrians Monday morning, while scenes from the game were replayed constantly on television.

"It has been so scary with the earthquake and everything," said 22-year-old Miaki Tomiyama. "The team has given us happiness."