San Diego Padres lose Game 1 in the best of 5 series to their longtime rivals from LA. They will play Game 2 on Wednesday at 6:08 p.m.

SAN DIEGO — The San Diego Padres took the field for another postseason series on Tuesday after winning their first playoff series against the St. Louis Cardinals since 1998. Similar to that series, Game 1 started with a loss to the division rivals and World Series favorites, the Los Angeles Dodgers, 5-1.

Mike Clevinger’s return to the Padres only lasted two pitches into the second inning. Walking two batters and throwing a wild pitch in a scoreless first inning, Clevinger threw two balls to Dodgers center fielder Cody Bellinger to start the second. Padres manager Jayce Tingler went to the mound, and after a brief conversation decided it was time for the pitcher to hand over the ball. Clevinger missed the entire first round of the playoffs due to injury.

The Dodgers walked 10 times, matching the NLDS record for a nine-inning game.

Once the Padres starter left the game, eight additional pitchers were used to get through the remaining eight innings of the game. San Diego used nine pitchers for the third time in four postseason games.

The Padres will have a chance to even the best of 5 series on Wednesday with Game 2 scheduled for a 6:08 p.m. first pitch.

The MLB Divisional Series will be totally different from years past. Due to the COVID-19 pandemic, Major League Baseball opted to go with a bubble style approach to the NLDS and beyond. This means the Padres and Dodgers will be playing on a neutral field in Arlington, Texas rather than bussing between Petco Park and Chavez Ravine.

There was a little more ‘sunshine’ in San Diego after the team announced its 28-man roster for the series. The team's prized trade deadline acquisition, Mike Clevinger is on the roster and is confirmed as the Game 1 starter against the Dodgers.

Many fans met up downtown to shop for their “friar fashion.”

“We just got some shirts, and a new hat and this beautiful sweatshirt, as we are sending good vibes to our Padres in Texas,” said Padres fans Nicole Sales and Mariah Flores.

There was a long line wrapped around the team store outside Petco Park. 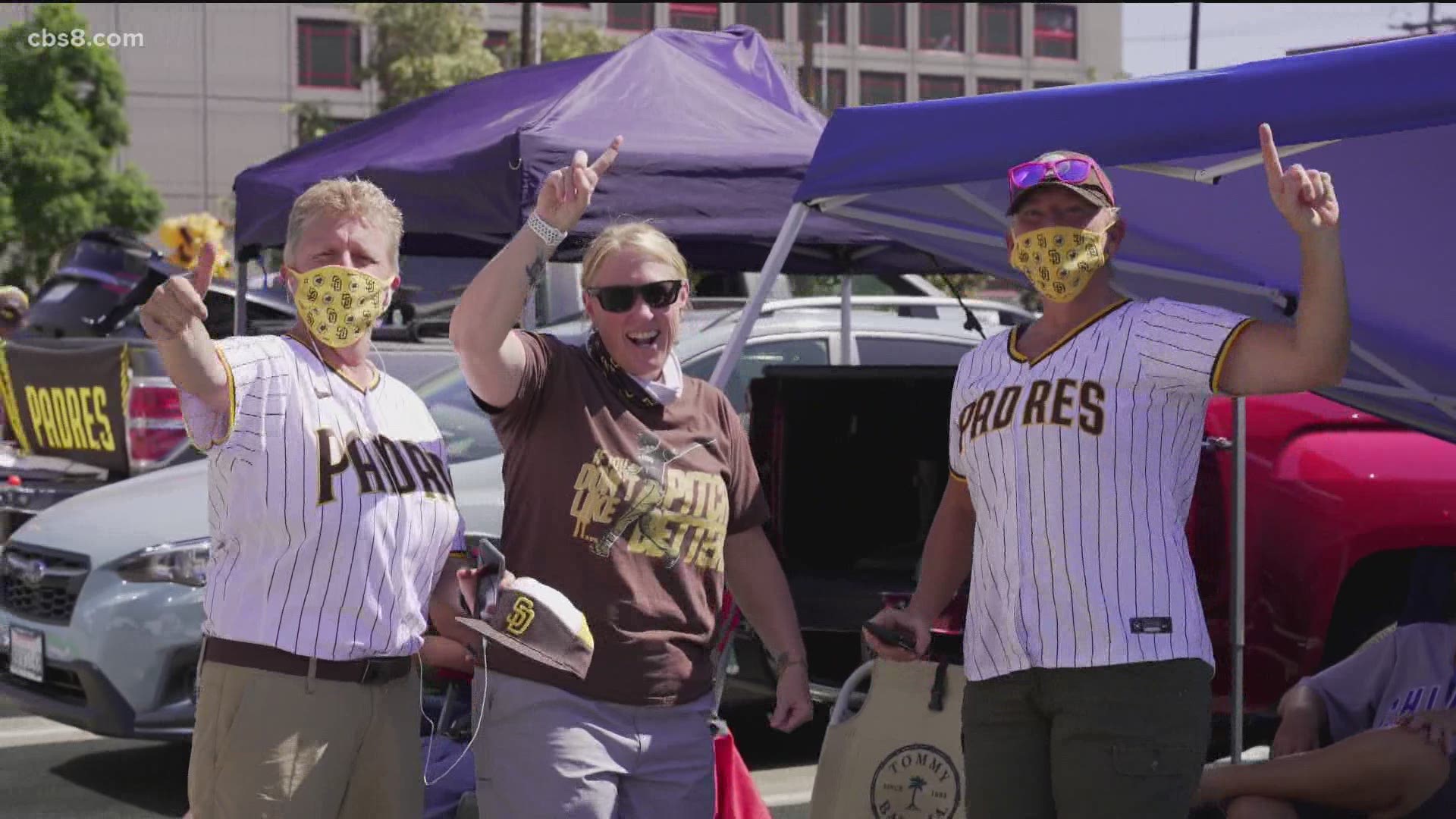 “I got something for my husband, we love the Padres, he’ll be excited, I had to go with the new Tatis Jr.,” said Jamul resident Michelle Fielding with the brown and yellow jersey in hand.

It was a baseball house divided for married couple Mike and Cathy Calendar rooting for opposing teams.

But for the first time the Padres and Dodgers face off in post-season play, some San Diegans are rooting for the team in LA.

“I got to go for the Dodgers, Buehler is pitching, he is a really good pitcher, and they have a really good team, but honestly, it will be a win-win either way, Mike Calendar said.

Many “Friar Faithfuls” were set to watch the big game off large LED screens from the tailgate parking lot costing at least $300 per spot.

Little Logan Estella is hoping to for another Slam-Diego.

They’re my home team, I live in Oceanside California, and I want to root for them,” Estella said.

He and his mother Lulu Salinas literally had to run to the Padres store to make it home in time after his little league baseball practice in order to cheer the Padres on.

“It’s iffy you know, but I have faith in our Padres, I think we are going to take it,” Salinas said.

The MLB Divisional Series is a best-of-5 format.

Former Padre and Dodger, Steve Garvey joined the show to break down the series.