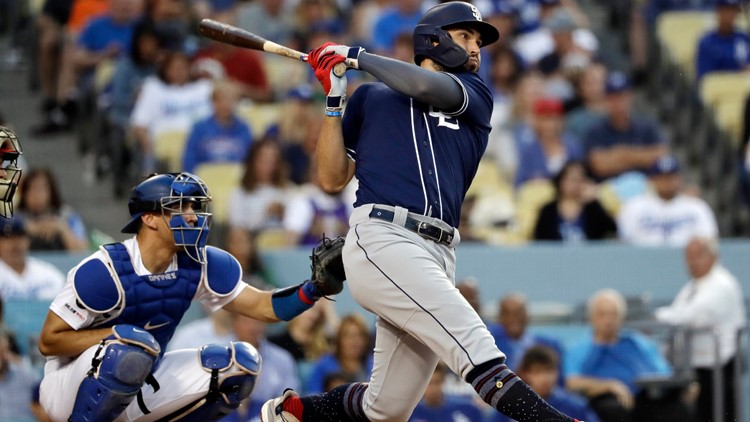 Photo by: AP
San Diego Padres' Eric Hosmer drives in a run with a double against the Los Angeles Dodgers during the third inning of a baseball game Friday, July 5, 2019, in Los Angeles. (AP Photo/Marcio Jose Sanchez)

Lauer was facing Enriquè Hernàndez when the quake struck in the fourth. Lauer's first three pitches of the at-bat — including two strikes — came during the shaking that unnerved some fans in the crowd of 49,790 enough to move from their seats in the upper reserve level and caused the press box to lurch for several seconds.

The TV broadcast was marred by the camera bouncing up and down.

Hernàndez appeared to react to the quake by stepping out of the batter's box after Lauer's third pitch. He eventually flied out to left field to end the inning.

There was nothing said by the public address announcer regarding the quake.

"People were freaking out," said Daniel Earle, a 52-year-old fan sitting with his wife in the reserve level. "I'm surprised my arm is still here. She was squeezing into it so hard."

Jamie Taralunga of Ann Arbor, Michigan, landed in Los Angeles on Thursday, just after a 6.4-magnitude quake. The latest one unnerved her.

"It was pretty crazy," she said. "I just heard a bunch of screaming all of a sudden and everyone's shaking back and forth. Swaying almost like a boat."

Craig Stammen (6-4) got the victory in relief. Kirby Yates earned his 28th save.

The Dodgers tied it 2-all in the sixth. Newly named All-Star Max Muncy grounded into a fielder's choice to first base that scored Alex Verdugo, who had a leadoff double and went to third on Lauer's wild pitch.

The Padres took a 2-0 lead in the third.

Eric Hosmer's RBI double to deep center scored Lauer, who reached on catcher's interference by Austin Barnes. Manny Machado, the former Dodger who has been booed heavily in the first two games of the series, followed with a fielder's choice groundout to third that scored Fernando Tatis Jr., who singled.

Lauer allowed two runs — one earned — and four hits in six innings. He struck out six and walked one.

Kershaw gave up two runs — one earned — and five hits. He struck out nine and walked one.

Dodgers: C Will Smith went on the 10-day IL with a strained right oblique, retroactive to June 25. ... OF A.J. Pollock (right elbow inflammation) and SS Corey Seager (strained left hamstring) are scheduled to be activated for the first game at Boston after the All-Star break. ... INF David Freese (strained left hamstring) is about 75% healthy and might not return this weekend as originally thought.