The San Diego Regional Chamber of Commerce Thursday was expected to announce its support of the Chargers Initiative to build a new multi-use sports complex and convention facility downtown. 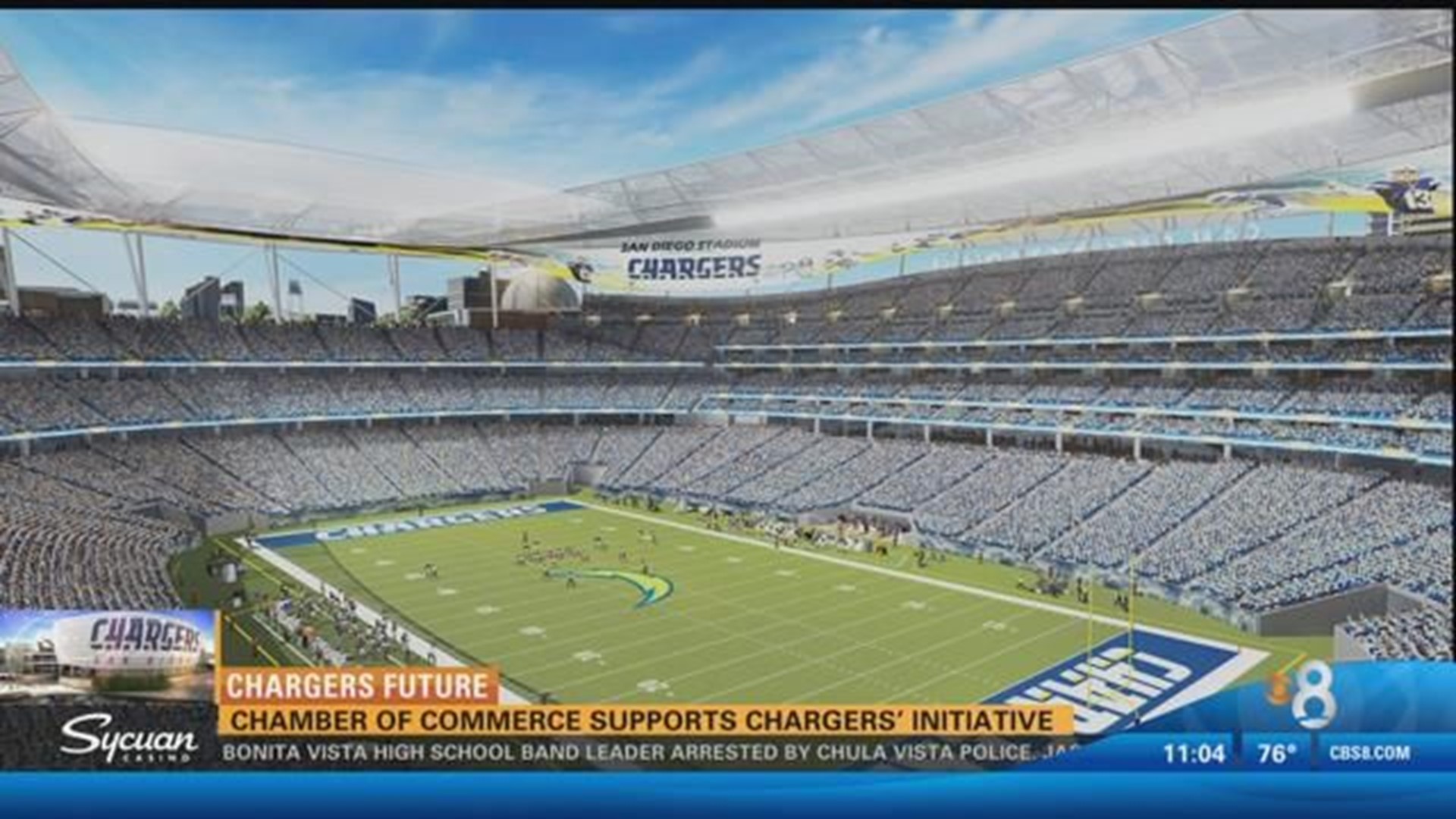 SAN DIEGO (CNS) - The San Diego Regional Chamber of Commerce on Thursday announced its support for the Chargers Initiative to build a multi-use sports complex and convention facility downtown.

"This is not about football business, this is about San Diego Commerce," said Margie Newman, a small business owner and member of the chamber's committee on the Chargers Initiative.

"Our ad hoc committee's recommendation to the board that the Chargers Initiative would be supported was the result of analysis and extensive discussion with representatives with the Chargers, the lodging and tourism industry, members of the community, chamber partner organizations and other key stakeholders," Newman said. "A new downtown stadium and convention center space with a long-term commitment from the Chargers franchise is the right call, not just for bolts fans, but for anyone who is a fan of a thriving San Diego economy."

The announcement was made at a late morning news conference at Chargers Park in Murphy Canyon after the chamber's board of directors voted to support the plan. San Diego Regional Chamber President and CEO Jerry Sanders, San Diego Chargers Chairman of the Board Dean Spanos, Chargers Head Coach Mike McCoy and retired Chargers center Nick Hardwick joined Newman in making the announcement. "I cannot tell you what this means to me personally, but I can tell you that we would not have a chance of success without the support of the chamber," Spanos said. "It's a long hard road ahead of us and we're up for the challenge. We're committed to get this thing approved and we're going to do it."

In its letter of support for the initiative, the chamber outlined several requests that it asked be considered by the Chargers, including, making sure the tourism marketing district gets 2 percent of the increase in tourism taxes, that no money be used from the city's general fund, and that parking, traffic and infrastructure issues be addressed, among other issued.

Sanders said it's a matter of civic pride to keep the Chargers in San Diego and a new downtown stadium would have a positive impact on the East Village, Downtown and the entire region.

"We take pride in being an action-oriented business organization that works to continually move our region forward," Sanders said. "After a thorough review of the plan, we believe the Chargers Initiative is the best step forward in meeting the challenge before us: Keeping our NFL team in San Diego and enhancing our convention industry."

One group that the chamber's board of directors did not meet with before the vote, was the "No Downtown Stadium - Jobs and Streets First" coalition.

"I oppose the Chargers ballot initiative because it's another bad stadium deal for San Diego," City Councilman David Alvarez said. "San Diegans are tired of deals that give away millions of taxpayer dollars to people who don't need the money. I am confident San Diegans will say 'enough' and reject this bad stadium deal."

Chargers head coach Mike McCoy took time out from his preparation for the beginning of training camp Saturday to speak in favor of the new stadium. "We have a great opportunity here for what we're doing moving forward," McCoy said. "We look forward to getting this stadium and we are the San Diego Chargers forever. It's important to support this great campaign." Retired Chargers center Nick Hardwick urged voters to get to the polls on election day.

The Chargers Initiative was approved for the November ballot by the San Diego City Council earlier this month, after the Chargers submitted enough signatures by registered voters in the city of San Diego.

Mayor Faulconer firmly believes that the plan for a new stadium must be fair, balanced, and maintain San Diego's status as both a vibrant sports city and model of fiscal responsibility. There are a number of key financial issues that the text of the initiative does not address, which is why City staff has been working with stakeholders and analysts to get answers to these important questions. We are looking forward to additional analysis and information that is coming that will give greater clarity on the project's finances and, ultimately, whether this is a fair deal for taxpayers.