Chargers take Manti Te'o in 2nd round of NFL draft 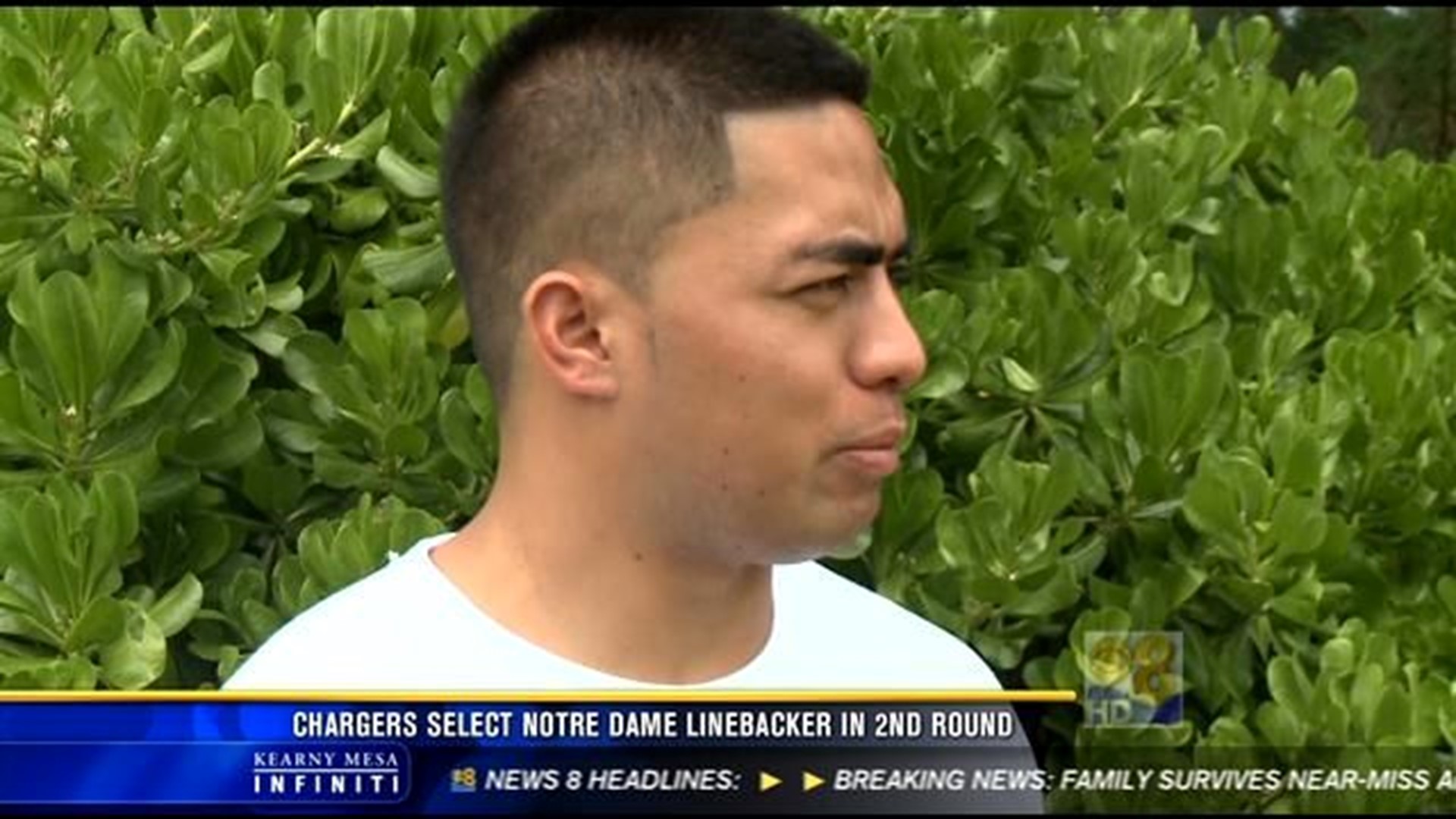 SAN DIEGO (AP) — After dealing with the commotion over his fake online girlfriend and his flop in the national championship game, Manti Te'o believes he's ready for the NFL.

That includes being mentally tough enough for the verbal abuse he'll surely hear in places like Oakland and Philadelphia, the San Diego Chargers' first road game next season. Te'o said Saturday that he's been through a lot and he's ready.

The Chargers' rookie brain trust, general manager Tom Telesco and coach Mike McCoy, said they weren't bothered by the scrutiny Te'o has been under the last four months. The Chargers traded up in the second round to pick the Notre Dame linebacker, who was the Heisman Trophy runner-up.

This is a story update, an earlier AP story is below.

SAN DIEGO (AP) — Manti Te'o made it to the NFL a day later than he expected, motivated to play well because he was snubbed in the first round of the draft.

Unconcerned about a hoax involving a fake girlfriend and a flop in the national championship game that have dogged Te'o for four months, San Diego Chargers rookie general manager Tom Telesco moved up seven spots in the second round to draft the Notre Dame linebacker on Friday night.

"I did expect to go in the first round. But things happened and all it did was give me more motivation to get better," Te'o said in a conference call with reporters.

Te'o had spent Thursday with family members in Hawaii, watching the first round of the draft and waiting for a phone call that never came.

"I don't know if I have something to prove, but it definitely puts a huge fire under my butt to just be better," Te'o said. "Again, that's the best thing that ever could happen to me. I'm already naturally a motivated person who just wants to be the best. All yesterday did was just give me more motivation and more fire to just go out there and play football and do well at it."

Te'o visited the Chargers before the draft, giving Telesco and rookie head coach Mike McCoy the chance to ask him about the issues.

"He handled it great," Telesco said.

Were the Chargers bothered by the scrutiny Te'o has been under?

"Obviously not. We took him," Telesco said. "We did our due diligence. All that stuff is not a concern to us. So we're just really, really excited to get him here. He took that Notre Dame program and kind of raised the talent level of the whole program. He was the undisputed leader there. We saw that.

"As a player, as a playmaker, he's instinctive. We can't wait to get him on the field."

Telesco said the Chargers had Te'o rated as a first-rounder. They needed an inside linebacker because Takeo Spikes was released and Demorrio Williams is a free agent.

"We knew somebody may come up to get him. It was strictly just a judgment, a gut call," Telesco said. "Can we wait any longer? We made the move up to get him. Could we have waited? You just never know. We thought the value was there as far as giving up that pick to go get him."

Before being hired by the Chargers, Telesco was in the Indianapolis Colts' front office and had seen Te'o play several times.

"He's one of the finest kids I've met," Telesco said. "He loves football, is passionate about it. He's a leader. He was a leader at Notre Dame, not only on the football team, but on that campus."

Two officials, each with a different team, said their clubs passed on Te'o in the first round partly because of his off-field issues. The men, speaking on condition of anonymity because team draft strategy is confidential, said the decision was not just because of a disappointing combine performance or the linebacker's poor performance in the national title game.

The Heisman Trophy runner-up became the butt of national jokes after it was revealed he was duped into an Internet romance he had with a girlfriend he never met.

The too-good-to-be-true story began with Te'o's incredible performances after learning his grandmother and what he believed was his girlfriend had died within hours of one another in September. Te'o said it inspired him to play his best football all season, and it was so compelling that it helped turn Te'o into a Heisman Trophy contender as he was leading the Fighting Irish to an undefeated regular season and into the national championship game.

On Dec. 26, Te'o notified Notre Dame officials that he had received a call from his supposedly dead girlfriend's phone three weeks earlier.

The school investigated and on Jan. 16 — after Deadspin.com broke the story of the fake girlfriend — athletic director Jack Swarbrick announced at a news conference that Te'o had been duped. Ronaiah Tuiasosopo, 22, later said he created the online persona of Lennay Kekua, a nonexistent woman whom Te'o said he fell in love with despite never meeting her in person.

Te'o struggled in Notre Dame's blowout loss in the national championship game to Alabama and its offense full of future NFL draft picks. One of those players, right tackle D.J. Fluker, was drafted by the Chargers with the 11th overall pick Thursday night.

Te'o said everything he's gone through has increased his passion for the game because "that's my sanctuary, that's my fortress where I'm most comfortable. All it has done is made me look forward to when I'm back on that field again."

Te'o will get plenty of attention before he even plays a game with the Bolts.

Te'o said going to the Chargers is "a perfect scenario. My parents can come and watch, I can go home, it's San Diego. We're all excited. I can't be any happier. Just looking forward to getting up there and getting this whole thing started.

"You talk about the Chargers, especially for a Samoan kid like me and you think of Junior Seau and what he did there and the legacy he left behind not only in San Diego but in the NFL," he said, mentioning the Chargers' late star linebacker.

A four-year starter and team captain, Te'o had 113 tackles, seven interceptions — the most ever in a season by a Fighting Irish linebacker — and 1½ sacks in 2012.

Te'o said he's going to be the same player in the pros as he was in college.

"I love the game, first and foremost. I'm a student of the game. I love to study film. I work hard. That's exactly what I'm going to be. I'm not going to change anything."

In the third round, the Chargers took Keenan Allen, California's all-time leading wide receiver, with the 76th pick overall.

The pick was unexpected, but certainly upgrades the position. He had 61 catches for 737 yards and six touchdowns for the Golden Bears last year, when he missed the final three games with a knee injury. He finished with 205 catches in three seasons. His 2,570 career yards were third in school history.