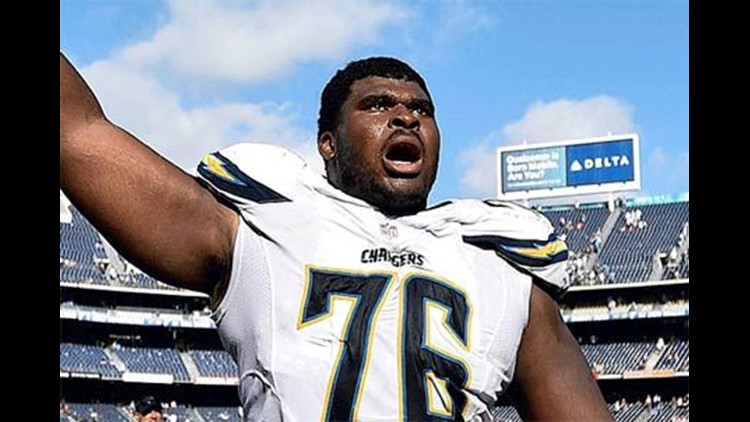 SAN DIEGO (AP) — Chargers right guard D.J. Fluker is expected to miss considerable time with what is believed to be a high ankle sprain.

Fluker was hurt in the third quarter of Sunday's 33-28 victory against Detroit in which the Chargers scored 30 straight points to rally from a 21-3 deficit.

As usual, coach Mike McCoy declined to be specific, other than to say Fluker's left ankle isn't broken. When asked Monday if it was a high sprain, McCoy said: "He has an ankle injury." The coach said Fluker was "a little sore."

Fluker was on the ground for several minutes and it took three people to lift him onto a cart, including big left tackle King Dunlap.

Asked if Fluker will be out for Sunday's game at Cincinnati, McCoy said: "He is sore today. We'll let you know later in the week."

Fluker was playing his first game at guard. He played right tackle his first two seasons with San Diego as well as at Alabama.

Chris Hairston, signed as a free agent in April, replaced Fluker and played guard for the first time. Hairston had played only tackle in his previous three NFL seasons.

"Really in any organized football situation. It just never came up for me to have to slide into guard," said Hairston, who added that he had practiced at guard in previous seasons. "I was just glad I was ready. It's a testament to this coaching staff, a testament to the guys that helped get me get caught up and get rolling."

After watching the film, Hairston said there are "a lot of things to work on. It's a lot of communication, a lot of jelling that has to happen instantly. When a guy goes down, there can't be any drop off. Five guys have to be as one. I just want to be part of that one."

San Diego's Philip Rivers had a sensational day. He overcame two interceptions, including a 31-yard return for a touchdown by Glover Quin, to complete 35 of 42 passes for 404 yards and two touchdowns. Rivers tied Hall of Famer Dan Fouts' franchise record of 254 career touchdown passes. It was his seventh career 400-yard game, and he completed his final 20 passes, a team record.