The Los Angeles Chargers formally introduced Anthony Lynn as their coach Tuesday, and even he initially had trouble remembering which city the team will be playing in next season. 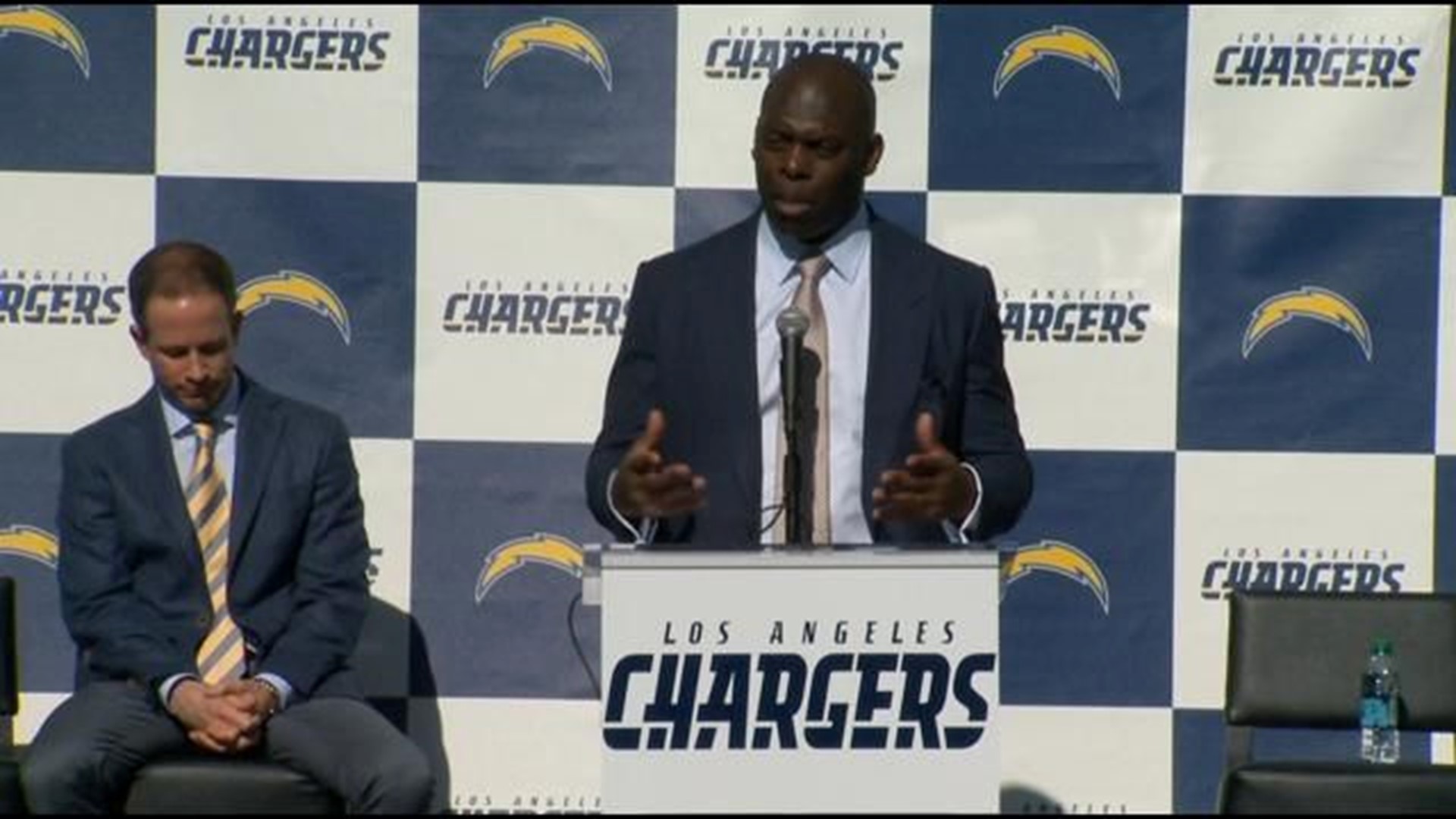 CARSON (CNS) - The Los Angeles Chargers formally introduced Anthony Lynn as their coach Tuesday, and even he initially had trouble remembering which city the team will be playing in next season.

"I am so proud to be the head coach of the San Diego - uh, L.A. Chargers," Lynn said as he opened his remarks at a news conference at the StubHub Center in Carson.

Lynn succeeds Mike McCoy, who was fired Jan. 1 less than two hours after the Chargers concluded a 5-11 season with a 37-27 loss to Kansas City. He was named head coach one day after the team announced it was moving from San Diego to the Los Angeles area. The team will play at StubHub Center before moving to a new Inglewood stadium it will share with the Rams beginning in 2019.

"I knew this was the right place for me early on in the interview when I asked one simple question - 'What are you looking for in a head coach?"' he said. "And I feel like they described me. And I had to hold back my excitement at that time, but I knew I wanted to be a Charger at that time."

Lynn said he was confident the team would emerge from the "adversity" of coaching and venue changes, with the players and staff becoming a closer- knit unit.

"Guys are so excited to come here and play on this stage right here that we have in Los Angeles, so I'm really excited about that," he said. "The type of team that I envision us having, after watching our personnel and going through our tapes -- these guys play hard," he said. "We brought in the right players. We have good character guys that understand football and know how to play the game, OK? But we're going to be tough. We're gonna be disciplined on the football field. We're going to play smart, situational football and we're going to have good efficient quarterback play." Chargers President-Football Operations John Spanos called Lynn "a natural-born leader."

"He is really going to communicate and connect with our players," Spanos said. "He's had a number of great coaching influences in his life and as a former player who won two Super Bowls, Anthony knows first-hand what championship pedigree is all about."

Lynn was the Dallas Cowboys running backs coach from 2005-2006 under Bill Parcells, a member of the Pro Football Hall of Fame.

Lynn joins a team that has had back-to-back losing seasons and last reached the playoffs in 2013.

Lynn began the 2016 season as the Buffalo Bills assistant head coach- running backs coach, was promoted to offensive coordinator Sept. 16, one day after the team got off to a 0-2 start, and became the interim coach on Dec. 27 when Rex Ryan was fired with one game remaining in the season.

Lynn, 48, has 17 years of NFL coaching experience, beginning in 2000 as an offensive assistant and assistant to special teams with Denver under Shanahan. He was a running backs coach for the Jacksonville Jaguars in the 2003 and 2004 seasons, Dallas, Cleveland Browns (2007-08) and New York Jets (2009- 14) before joining the Bills in 2015.