Rivers Edge | Philip's new team is 3-1, winning games with his brain, not relying on his arm

Philip will be 39 years old on Dec. 8. And now he has a team around him, that is a complete team. 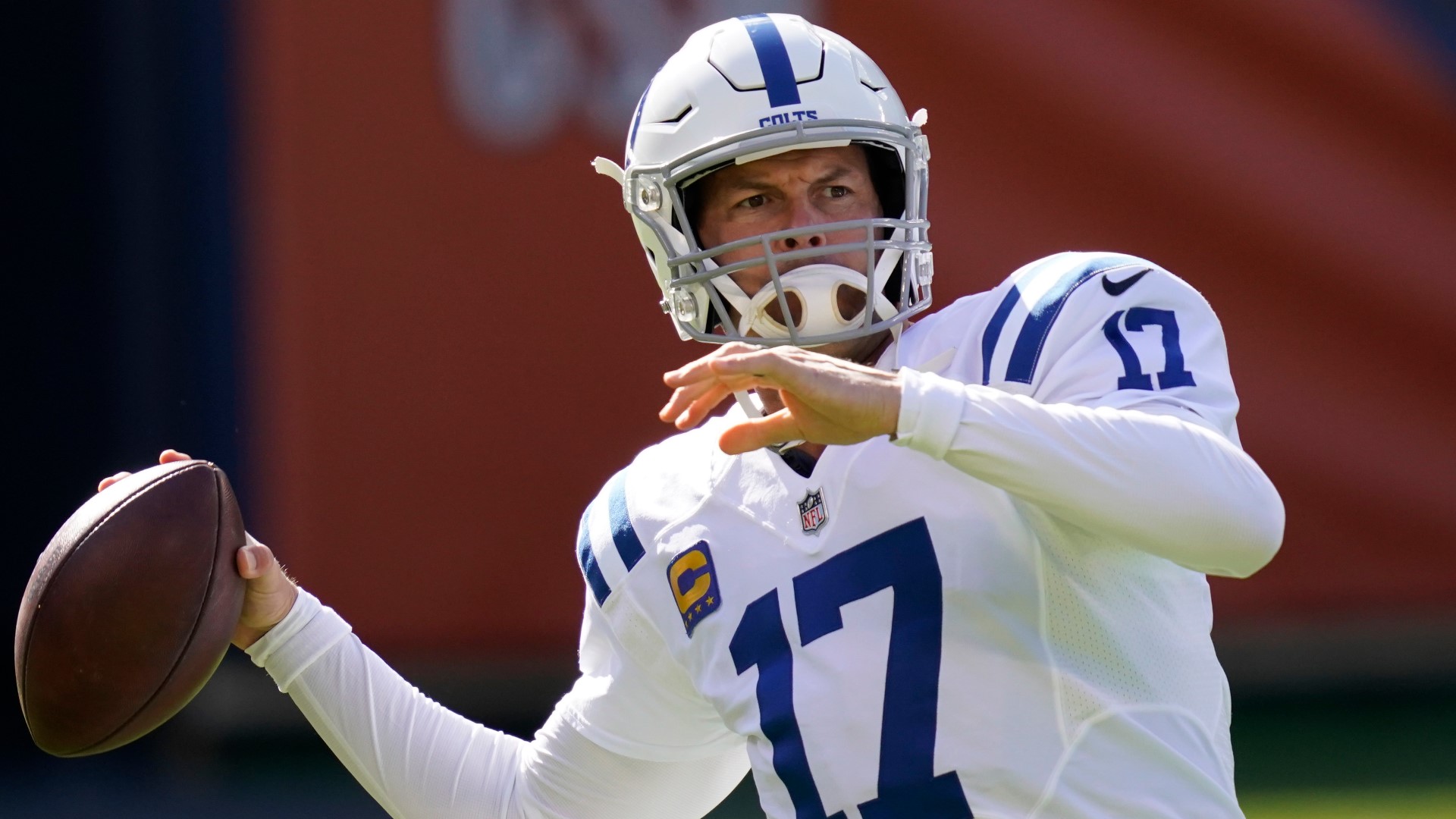 INDIANAPOLIS — The NFL regular season is now 25% complete. That's four games, and through those four games, Philip Rivers, after a rough start in week one against the Jacksonville Jaguars, has rallied his Indianapolis Colts to three consecutive wins. And they are now three and one overall.

Now, when I say he's rallied the Colts, I mean as a leader of this football team, because Philip now wins football games with his brain, not necessarily with his arm. He needs to remain mistake-free. And that's what he's been able to do. And that's why the Colts have been successful. Philip Rivers' numbers on Sunday in Chicago against the Bears: 16 of 21,190 yards passing, one touchdown and zero interceptions. Wow.

That is not a line we're used to seeing. Philip in the past has thrown the ball for 400 yards and four touchdowns, often in a losing cause. But of course, Philip will be 39 years old on Dec. 8. And now he has a team around him, that is a complete team.

Believe me, if you haven't been paying attention, the Indianapolis Colts are one of the most complete teams in all of football. And the good thing is they've got a smart quarterback in Philip Rivers that realizes that. Here's the winning formula for the Colts: run the ball over 30 times a game, win the turnover battle - do not turn the football over, win the time of possession, and then let your defense close the deal.

In their three previous games: 11 points given up to the Vikings, 7 points given up to the Jets and 11 points allowed to the Bears. That's a winning formula and that's how the Colts are going to be successful. And that's why I think the Colts will be a playoff team this year. So far, they're allowing 236 yards per game to their opponents. That is by far the best in the NFL. In fact, there are only three National Football League teams allowing fewer than 300 yards per game.

So this marriage between Philip Rivers and the Indianapolis Colts has been a perfect one so far. They figured some things out in week one. And now with three straight wins, they head into Cleveland and take on the Browns this coming Sunday. This is going to be a great game to watch because just like the Colts, the Browns had a rough start and got smashed by the Baltimore Ravens in week number one. They've reeled off three consecutive wins, putting up 49 points on the Cowboys Sunday in a big victory. So next week, two 3 and 1 teams going toe-to-toe in Cleveland - Philip Rivers and the Colts against Baker Mayfield and the Cleveland Browns.

Finally, one thing I like to do on Mondays is to take a look back at the rating sheets for Sunday. A lot of you have asked me about the games that get the most viewers in San Diego. And a lot of people say they don't want to see the Chargers on TV. Who cares! Well, the ratings usually tell us who cares and what they are watching. At 10 a.m. on CBS, it was the Chargers and the Buccaneers followed by the Bills and the Raiders at 1 p.m. on CBS. That went head-to-head with the Giants and the Rams on Fox and then the late game Sunday Night Football with the Eagles and the 49ers. We had three California teams going at it and, of course, the Raiders, also a very, very popular team.

Can you guess who won the rating battle on Sunday? If you said the Rams by any chance, guess what? Dead last.

The Rams were dead last with a 5.6 rating.

Second to last was the Bills and the Raiders. That was the afternoon game on CBS that had an 11.2 rating coming in second place.

Overall, the Eagles and the 49ers on Sunday Night Football had a 12.4 rating.

Have a great week, everybody. And lastly, of course, go Padres! Beat them, Dodgers.