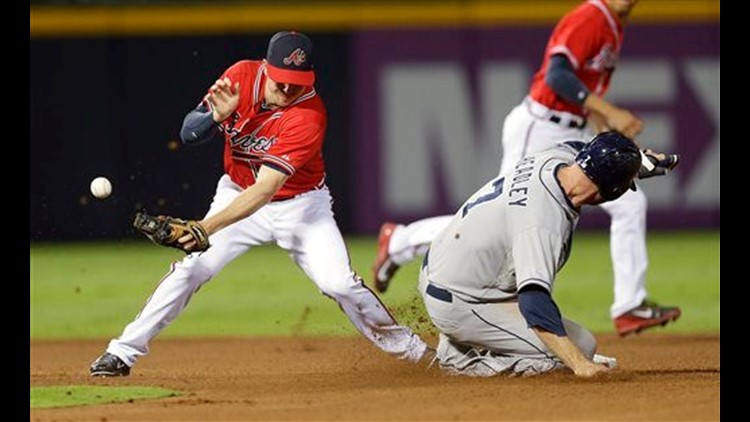 Hale pitched five scoreless innings and struck out nine, the most by a Braves pitcher in his first major league game.

Justin Upton and Brian McCann hit home runs off Ian Kennedy in the third inning to give the Braves a 3-0 lead.

The Padres scored two runs in the seventh and tied the game on Headley's leadoff homer off Jordan Walden (4-3) in the eighth.

Walden walked Tommy Medica, who moved to second on a wild pitch and scored on Forsythe's pinch-hit single to center field off Scott Downs.

Nick Vincent (5-3) had three strikeouts in the seventh. Luke Gregerson pitched a perfect eighth before Huston Street got the final three outs for his 30th save.

Kennedy didn't allow a hit until Upton led off the third with his 25th homer to left field. Freddie Freeman walked and scored on McCann's two-run homer, a high shot to right field.

Kennedy has allowed 25 homers, the second-highest total in the National League.

San Diego loaded the bases with no outs in the seventh on singles by Medica, Ronny Cedeno and Rene Rivera off Luis Ayala.

Hale struck out the side in the first, including Headley and Kyle Blanks with runners on first and third following singles by Denorfia and Jedd Gyorko.

Hale, from Marietta, Ga., near Atlanta, was recalled from Triple-A Gwinnett on Sept. 5. He filled in for left-hander Paul Maholm, who was skipped in the rotation due to a sore left elbow. An MRI on Wednesday showed no serious injury.

Downs, a left-hander, was cleared after being examined before the game for a non-displaced fracture to the tip of his right ring finger.

NOTES: Hale, from Princeton University, struck out Venable, also from Princeton, for his first out. ... Kenshin Kawakami (2009) and Bob Dresser (1902) each had eight strikeouts in their first major league games for the Braves. ... Padres manager Bud Black said 1B Yonder Alonso, who hurt his right hand on a check swing on Aug. 30, is "eligible to play defense" if needed but is not ready to hit. ... Braves OF Jason Heyward wore a protective flap on his helmet as he took batting practice on the field for the first time since his right jaw was fractured when hit by a pitch from the Mets' Jonathon Niese on Aug. 21. The Braves hope Heyward can return before the end of the regular season. "Nothing is holding me back," Heyward said ... Braves RHP Kris Medlen will face Padres LHP Robbie Erlin on Saturday night.