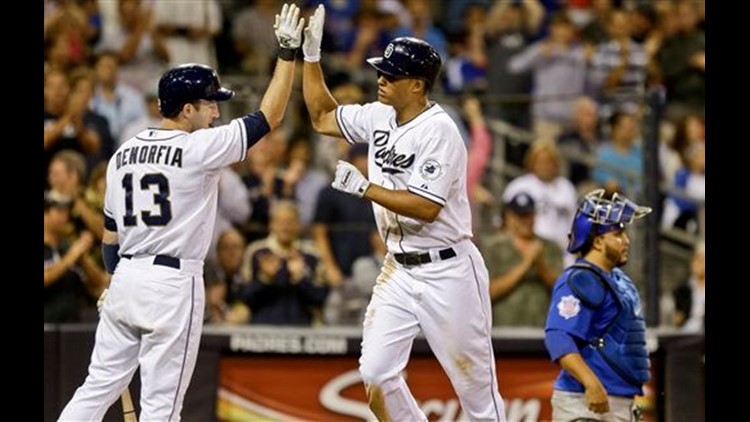 Padres rally for 8-6 win over Cubs

Padres rally for 8-6 win over Cubs

SAN DIEGO (AP) — Will Venable had three hits and three RBIs, including a tiebreaking solo homer in the seventh inning, and the San Diego Padres rallied to beat the Chicago Cubs 8-6 on Friday night.

Jedd Gyorko homered twice and drove in a career-high four runs as the Padres stormed back after a terrible start. Chase Headley and Logan Forsythe had two hits apiece.

Nate Schierholtz hit a three-run homer in Chicago's six-run first inning, but that was all the scoring for the Cubs.

Nick Vincent (3-1) pitched a scoreless inning for the win and Huston Street got three outs for his 25th save in 26 chances.

It was a remarkable turnaround from the first inning, when San Diego appeared to be headed for a long night when the first eight batters reached against Edinson Volquez.

Leadoff batter Starlin Castro reached on a throwing error by third baseman Chase Headley, moved to second on Anthony Rizzo's single and scored on Dioner Navarro's base hit. Schierholtz then connected for his 19th homer to make it 4-0.

Brian Bogusevic added a two-run triple as Volquez was lifted after only recording two outs, matching the shortest start of his career. The right-hander was 5-0 with a 2.76 ERA in seven career starts against the Cubs.

San Diego responded with three in the fourth on Gyorko's 15th homer, a drive to center on a 1-1 pitch from Edwin Jackson. Venable added a two-run triple of his own in the fifth, and the Padres were right back in the game.

Forsythe came up with a tying triple in the seventh, and Venable put San Diego ahead to stay with his 18th homer against James Russell (1-5). Gyorko greeted Blake Parker with a drive to right on his first pitch of the eighth, providing an insurance run.

Jackson allowed six runs, five earned, and 10 hits in six-plus innings. He is winless in his last four starts.

Tim Stauffer pitched 4 1-3 innings of one-hit ball in relief of Volquez. The Padres' bullpen threw 8 1-3 shutout innings in the win.

NOTES: Rizzo batted second in the order for the third straight game, a spot he hadn't hit in before Wednesday, when he slugged two home runs. ... The Cubs go against a left-handed starter in the Padres' Eric Stults (8-10) on Saturday. It breaks a 15-game streak of facing a right-handed starter. ... Padres OF Carlos Quentin will test his balky right knee by running on Saturday. Quentin has been on the DL since July 31. Manager Bud Black said if the news isn't positive regarding Quentin, an operation is a possibility. ... Padres OF Kyle Blanks will be sent out on a rehabilitation assignment on Saturday. Blanks had been sidelined by a left Achilles injury; he's been on the DL since July 12. Blanks will go to Triple-A Tucson or Single-A Lake Elsinore.