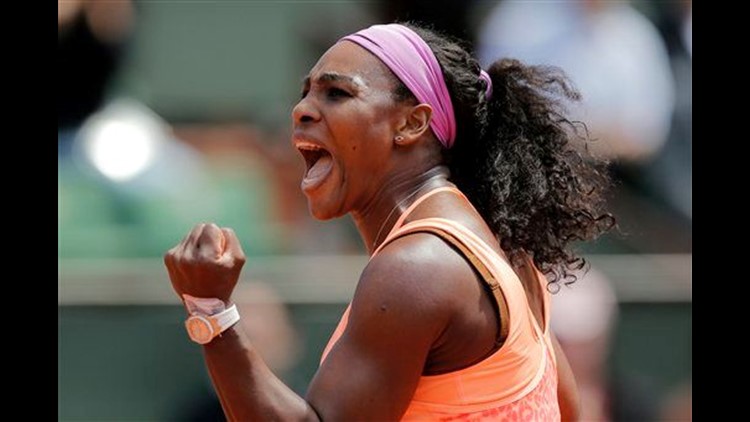 A two-time champion in Paris, Williams extended her unbeaten record against the 2012 French Open runner-up to nine matches.

The 19-time Grand Slam champion got off to sluggish starts and lost the opening set in her last three matches. She didn't have that problem today.

"It was very important for me to take a very good start," said Williams, speaking in French during her on-court interview. "The last four French Opens in a row she's been to the quarterfinals or better, so I knew I had to play very well today."

Williams broke for a 2-0 lead but dropped her serve in the next game. She saved a break point in the fifth game with a crosscourt backhand punctuated with a big "Come On!" and held after hitting a 121 mph (195 kph) ace.

Errani played deeper in the second set but was broken two more times.

Williams, who will play in her fourth Roland Garros semifinal match against Timea Bacsinszky, finished with 39 winners to Errani's nine.

Bacsinszky defeated Alison Van Uytvanck of Belgium 6-4, 7-5. The other women's semifinal will pit seventh-seeded Ana Ivanovic against No. 13 Lucie Safarova.

In men's play, top-ranked Novak Djokovic was playing nine-time champion Rafael Nadal for a semifinalist spot and Andy Murray was up against David Ferrer.

Errani fought hard to stay in the match on her final service game and saved three match points before going down. Williams missed an easy smash on the third one but earned another one with a powerful backhand down the line before Errani netted a forehand.

Williams, who claimed her titles in Paris in 2002 and 2013, has won 19 straight Grand Slam titles and is two matches away from a third consecutive major title.