"We do not want to see players and coaches that love the sport as much as we do bullied and their reputations sullied by unfortunate lapses of judgments..." 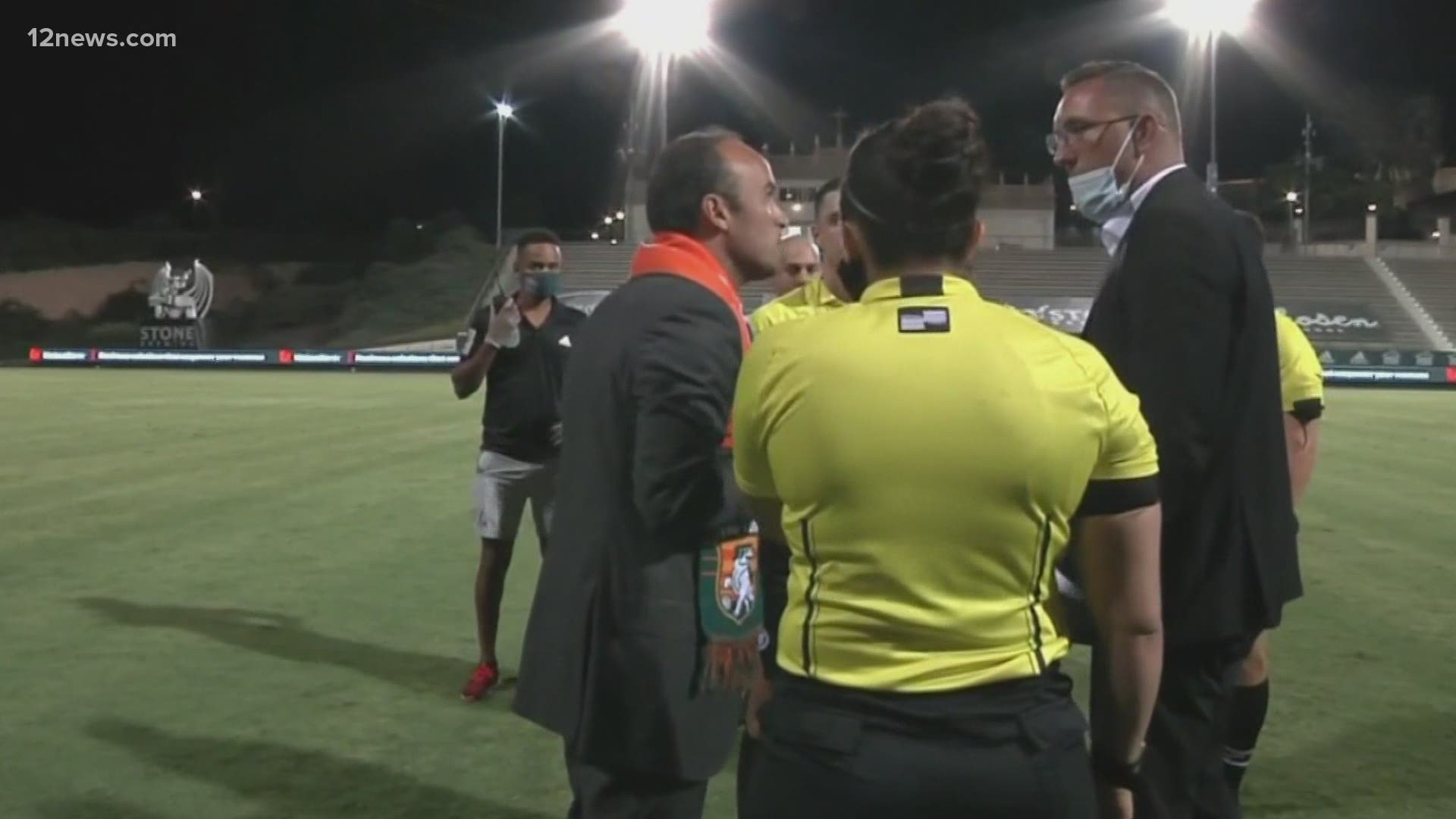 SAN DIEGO — San Diego Loyal SC released a statement via social media on Saturday and asked the public to be respectful to a Phoenix Rising FC player, coach and team in connection with an allegation of a homophobic slur directed at a player.

"We've received affirmation and an outpouring of support following our actions these last two matches," SD Loyal said in a statement released on social media, referring to forfeiting Wednesday's game and announcing it would forfeit the standings point from tying their game Sept. 23.

The rest of the statement read as follows:

"We're humbled and gratified but we have seen expressions of hatred towards Phoenix Rising, their head coach, Rick Schantz and their player Junior Flemmings which have no place in our sport as well as our society.

"We do not want to see players and coaches that love the sport as much as we do bullied and their reputations sullied by unfortunate lapses of judgments when fueled by passion and competition.

"We do not endorse a player being terminated by the club but rather given an opportunity to learn from their mistake through league punishment protocols and most importantly the support of their club.

"We believe in second chances and look forward to working with Phoenix Rising on productive ways we can forgive, educate and grow from these moments.

"We support `We Will Speak. We Will Act,' and we seek to forgive, educate and inspire.

"The purpose of our stand was to raise awareness, spread love and eliminate hate in all forms. We ask those who support our stand to please be respectful with Junior Flemmings, Rick Schantz and the entire Phoenix Rising FC organization. Threats of any nature are not the solution.

"We look forward to working with Phoenix Rising and the USL to make our game a safe and exclusive environment for all."

SD Loyal and Rising released a joint statement Saturday pledging "to work together to ensure that this moment could be used by all involved to teach, build and ultimately make our sport, our league and our communities better, more compassionate places."

We seek to forgive, educate and inspire. We ask those that support our stand to please be respectful with Junior Flemmings, Rick Schantz and the entire Phoenix organization.#SDLoyal 🤝 #RisingTogether pic.twitter.com/fUKkEokXIQ

The teams are committing to "working together towards the development of educational programs where players, staff and supporters will meet to share their backgrounds and life experiences" to "help foster a greater sense of understanding and empathy towards one another, as well as to bring awareness to the realities of conscious and unconscious biases," the statement said.

"The purpose of our stand was to raise awareness, spread love and eliminate hate in all forms," Smith said. "We believe in second chances and look forward to working with Phoenix Rising on productive ways we can forgive, educate and grow from these moments."

Said Rising Governor Berke Bakay: "Prejudiced language and bigotry has no place in sport or anywhere else for that matter. The on-field events of Wednesday's match could not be more contrary to the values of our organization.

"Bringing both clubs together to fight prejudice will undoubtedly lead to great things. We look forward to the implementation of these educational programs and hope that they can serve as a model for our league."

SD Loyal players walked off the field at Torero Stadium at the start of the second half Wednesday leading 3-1 and forfeited the game after midfielder Collin Martin, an openly gay player, was allegedly called a homophobic slur by Flemmings. 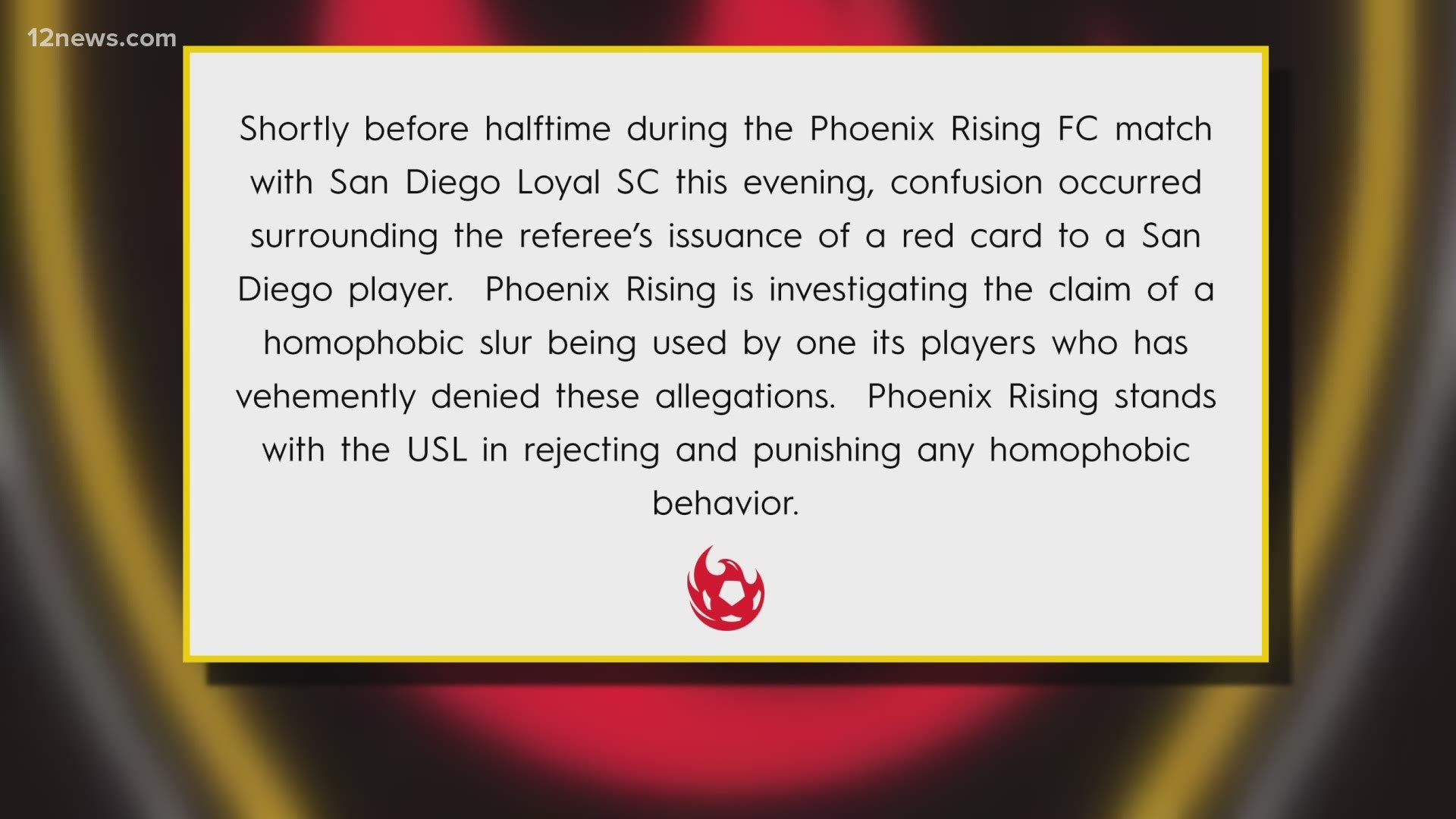 Flemmings issued a statement on his since deleted Twitter account Wednesday night calling the accusation false and writing that "my fellow teammates will support my claim." He also wrote that he was "mauled and ridiculed online" and "I stand in solidarity with the LGBTQ+ movement."

The second-division men's professional soccer team also announced Thursday that Flemmings "will be taking an administrative leave so that he may focus fully on cooperating with the investigation."

Flemmings is the league's leading goal scorer with 14.

SD Loyal announced Sept. 25 it would forfeit the standings point from their 1-1 tie with Los Angeles Galaxy II Sept. 23 because of a racial slur directed as SD Loyal midfielder Elijah Martin, who is Black. However, the league's standings did not subtract the point.

Galaxy II announced last Saturday they had "mutually agreed to part ways" with defender Omar Ontiveros, one day after he was suspended by USL Championship for six games because of the racial slur.