All sports now allowed to resume in San Diego

Even though San Diego County's case rate is above 14 cases per 100,000 people, a judge's recent ruling is allowing athletes in San Diego to get back on the field. 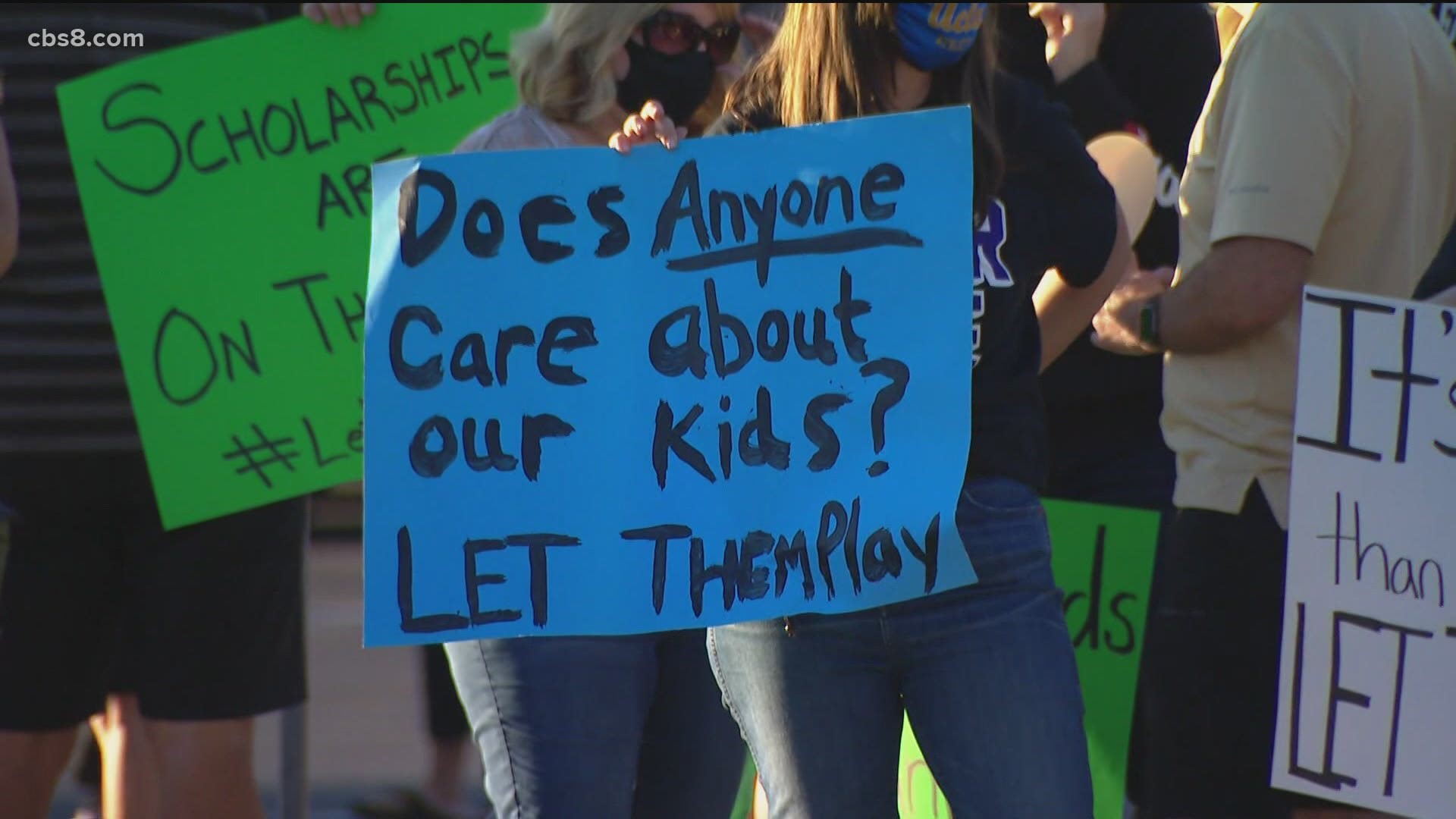 SAN DIEGO COUNTY, Calif. — It's been a long time coming, but starting Friday, competitive youth sports can finally resume. Last week, Governor Gavin Newsom issued new guidelines allowing all sports to resume in counties where the case rate is below 14 cases per 100,000 people.

But even though our county's case rate is above that, at 15, a judge's recent ruling is allowing athletes in San Diego to get back on the field. But there are still some strict guidelines in place.

As the football team gears up for practice, head coach at Scripps Ranch, Marlon Gardinera, said his players haven’t been this happy since nearly a year ago.

'It's a big day for all sports in San Diego County, they couldn't go to school, they couldn't go to church, they weren't in sports, some parks are still closed, today is like a rebirth. We handed out gear yesterday, it was all smiles—they couldn’t stop but today I imagine the energy is going to be higher than ever because we’re going to play some football," Gardinera said. "It's been long. It's been difficult. Football coaches coach football, but we spent the last few months trying to convince people that letting the kids come out from some of these restrictions is in their best interest."

Gardinera is among several local coaches who have been pushing for this change. In fact, he was the main force behind a lawsuit calling on all sports -- indoor and outdoor -- to resume as long as certain safety protocols are in place.

Last week, a judge agreed, as long as safety protocols like testing before games and wearing masks when possible are in place.

Some of his players are more than ready. “Especially given the fact we're already online for school it's tough to get outside and do anything," Scripps Ranch senior Tyler Fields said. "I mean it's just crazy.  We're all dying to get back out there.”

Torrey Pines head football coach Ron Gladnick said his players are just as eager to get back on the field. “You know this has been a grind for kids, not just football kids, but all kids,” Gladnick said.

As for why other teams may not be starting just yet, it's either because they're not in season, or they don't have a safety plan ready to go.

"We addressed all of these issues very very early on in this process," Gladnick added.

Families and the community showed continuous support for the youth throughout the pandemic.

Sports dad and co-founder of 'Let Them Play, California' Brad Hensley of San Diego said it's been weeks of rallying, facing the governor and a lawsuit aiming to resume sports. "Nine weeks ago we had nothing, we had no hope, there was no organization, there was no voice for kids," said Hensley. 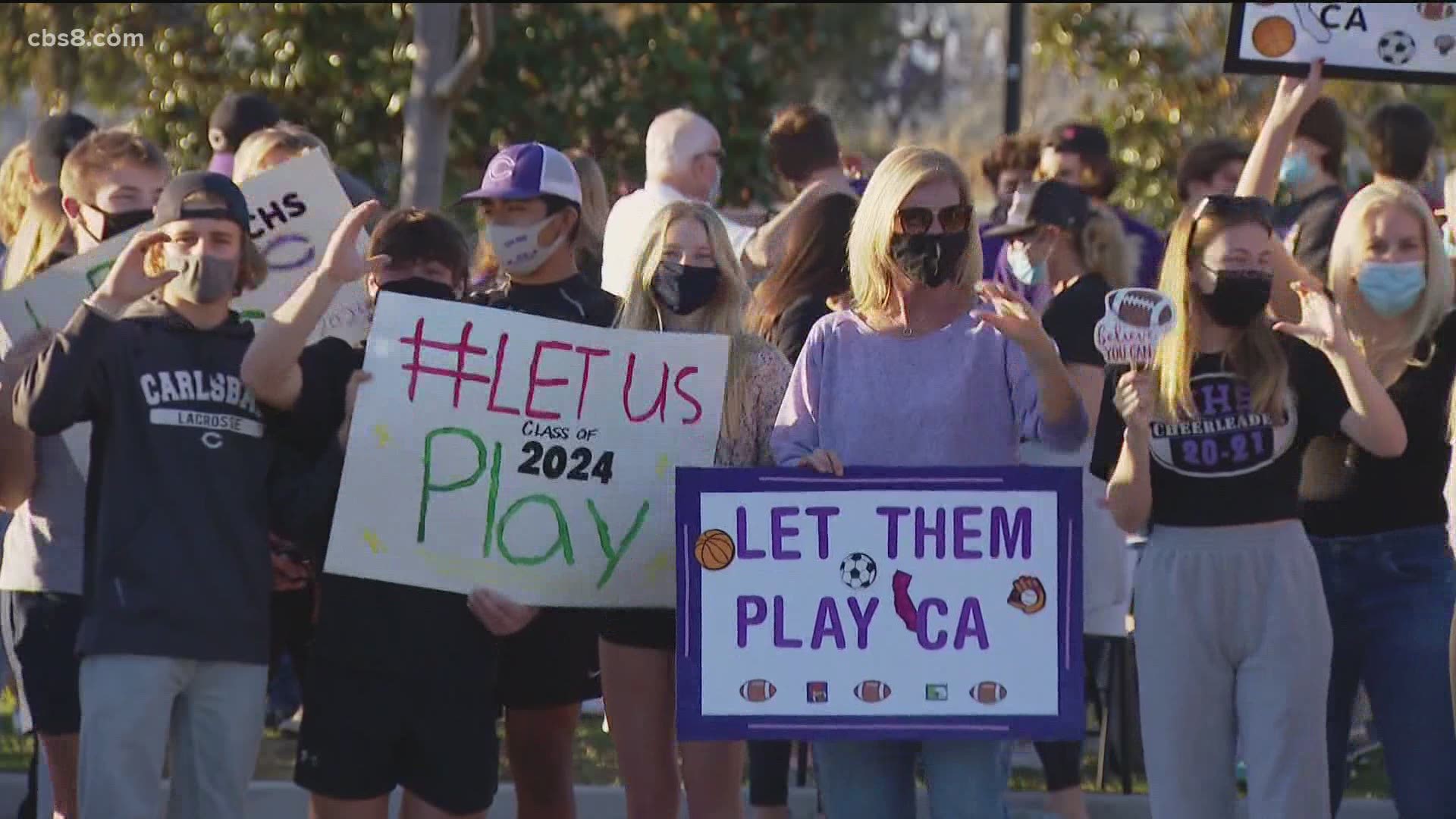 While Newsom said the state will pay for testing, he only mentioned certain sports.

Coaches Gladnick and Gardinera hope at some point, all sports will get the resources needed allowing them to play, though testing won't be required for low contact sports or if the county's case rate falls below 7 cases per 100,000 people.

In the meantime, they'll be holding practices starting now, in preparation for their first official games, both scheduled for March 12.

In regards to fans, both coaches say there's some mixed messaging, but at this point, they believe only players' families will be allowed to watch in-person.