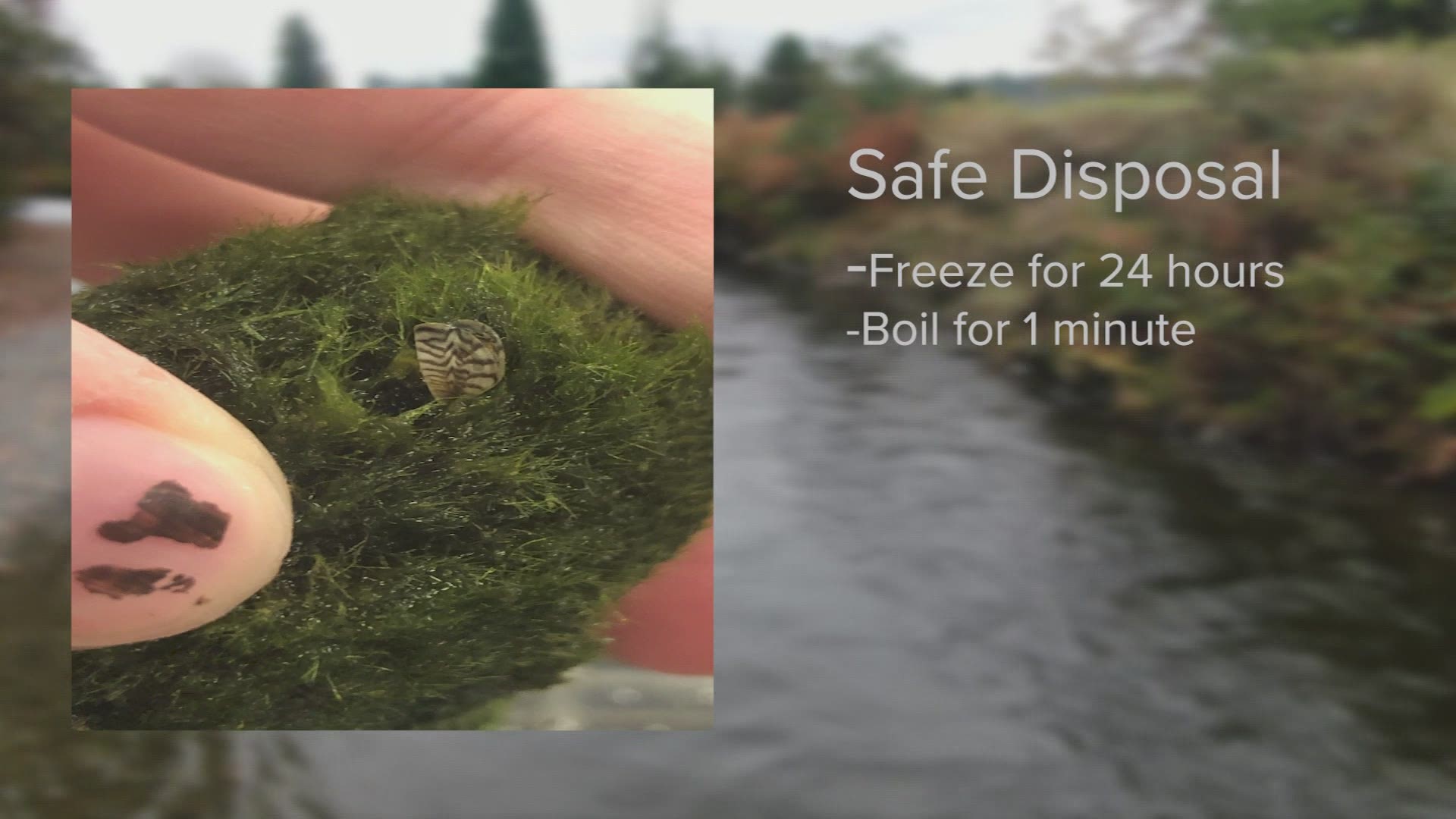 SEATTLE — Invasive zebra mussels were found on products at pet stores in nearly two dozen states after first being reported in Seattle.

The destructive shellfish were reported in 21 states nationwide, including California, Oregon and Alaska, the U.S. Geological Survey (USGS) said Monday.

"This is one of the most alarming things I’ve been involved with in over a decade of working with invasive species," said Justin Bush, executive coordinator for the Washington Invasive Species Council.

Zebra mussels are native to freshwaters in Eurasia and were discovered on moss balls, which are ornamental plants that are native to Ukraine and often added to aquariums. The shipments were sent to pet stores and sold.

If zebra mussels make it into any water source, they can multiply quickly and threaten native fish and wildlife by consuming available food and smothering other species. Zebra mussels can also clog water intakes for power anddrinking  water plants, block water control structures and damage fishing and boating equipment. They've caused a great deal of trouble in the Great Lakes region for decades.

The mussels were first detected in shipments of “Betta Buddy” brand Marimo moss balls at a Seattle Petco last week, according to the Washington State Department of Fish and Wildlife (WDFW).

A Seattle pet store employee filed a report in the USGS’ Nonindigenous Aquatic Species Database, which tracks sightings of non-native aquatics plants and animals. USGS fisheries biologist Wesley Daniel, who coordinates the database, visited a pet store in Gainesville, Florida after seeing the report and found a zebra mussel in a moss ball there.

"At that point federal non-indigenous species experts realized the issue was extensive," the USGS said in a statement.

Officials are hoping to prevent the mussels from establishing in Washington, and are currently going around to pet stores looking for any more impacted moss balls. Upping the level of concern — the Columbia River Basin is the last in the lower 48 states not impacted by the mussels, and with regional reliance on rivers for power generation and irrigation, the economic risks are high.

He also worries what impact mussels will have on ecological systems and the environment. The filter-feeders clean water to eat, taking it to an unnatural degree of clarity, and essentially collapsing existing ecosystems. Specifically, he also worries about mussels the potential impact mussels attached to fish ladders could have on already-beleaguered returning adult salmon, or infested bypass pipes on juveniles heading to sea.

“Imagine if all the insides of those pipes are covered with these mussels, sharp edges and that, they basically turn the bypass facilities into Cuisinarts for our little juveniles," Anderson said.

Washington estimates if zebra mussels are established, it could cost at least $100 million annually to control them, Bush said, and likely much more.

Anderson said he was shocked to learn they came into the state via the moss balls, a completely unexpected vector. Most enforcement has traditionally been focused on boaters clearing bilge tanks and cleaning aquatic equipment that moves between areas.

Last year, WDFW inspected more than 34,000 boats, Anderson said, and found 25 with mussels on them.

"This was on nobody's radar," he said. "This was completely out of left field for us. When the initial report came in, there was that scratching of the head - I didn't even know what moss balls were until last Tuesday."

"This just proves, pet stores, there's a vector for it," he added.

Credit: USGS
A moss ball sold in a pet store containing a zebra mussel (left); a USGS worker with zebra mussels found attached to a boat anchor in the St. Lawrence River in New York in 2018.

National alerts about the mussels have gone out, and officials are working to remove the moss balls from pet stores across the country, according to USGS.