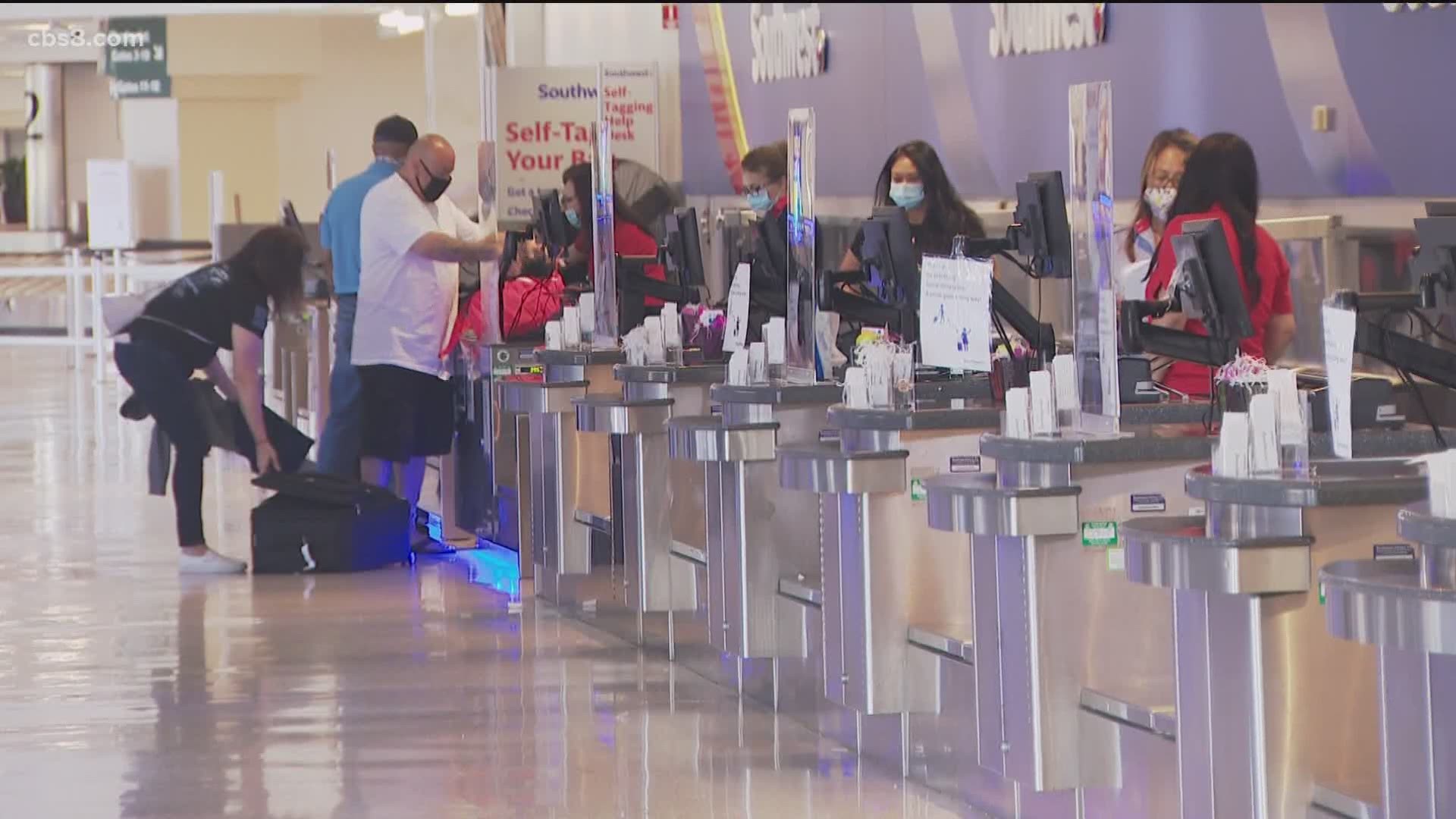 SAN DIEGO — San Diego International Airport saw a 95% reduction of people passing through its terminals in April compared to a year ago as people avoid unnecessary travel. Airlines have responded by swiftly cutting the number of flights and cities served.

“Our numbers are just staggering,” said Kimberly Becker, President/CEO of the San Diego County Regional Airport Authority, which runs the airport. “Typically, 40,000 people go through the [TSA] checkpoints and now we're in the range of maybe 2,000 on a good day.”

The airport has begun consolidating operations to reduce costs and consolidate demand. Several gates are blocked off in both terminals and about half of the security checkpoints are closed.

“We're really just trying to adjust to that demand that's out there,” said Becker.

The airport authority’s governing board declared an emergency last month because of the pandemic. It gives special, temporary power to Becker to react to the rapidly changing situation.

She recently used it to procure protective equipment for staff and passengers.

“We have a pretty long process for procurement, and we were running short on masks and hand sanitizer. We couldn't find appropriate sourcing for that. We couldn't find it anywhere. This gave us flexibility to go out and just look and find it,” explained Becker.

The federal government made grants and loans available to airlines and airports under the Coronavirus Aid, Relief and Economic Security Act. San Diego International is allocated to receive $91 million.

Most major carriers accepted billions to help cover operating costs and payroll. In exchange, airlines are required to fly a minimum number of flights to every region previously served before the pandemic. However, airlines can apply for an exemption from the Department of Transportation.

Hawaiian Airlines was the first to apply to end service to San Diego. The request was granted because of strict quarantine rules in Hawaii.

The public was permitted to submit comments in support or opposition to the request. The DOT only received feedback on San Diego service from officials in Hawaii who supported a reduction in travel. San Diego leaders chose not to submit feedback.

“Asking those carriers to fly to places when maybe two or three people on the flight isn't a sustainable business model for them and we have talked to them and they are bringing that service back,” explained Becker.

The agency approved all requests to suspend service for two to five months.

Airline schedules are constantly changing. Before the pandemic, JetBlue planned to expand the number of transcontinental flights from San Diego. In its filing with the DOT, the New York-based airline said it was now flying planes at 9% capacity. While the DOT allowed the airline to stop service to San Diego through Sept. 30, Becker said a representative from JetBlue called her Wednesday morning to say it will continue flying a reduced schedule.

The airport has halted efforts to attract new international airlines. Many are shying away from smaller cities and tourist destinations, like San Diego. Canadian airline Swoop indefinitely suspended plans to seasonally serve the city for the second time.

Extreme reductions in service, domestic and international, are expected to continue at least into the beginning of summer. Most airports expect it will take years to fully recover with the process starting in 2021.

“Our goal next year will be to go out and talk to those carriers that have suspended service and make sure we get them to where they are comfortable operating again and that the demand is there,” said Becker. “I feel like San Diego can support these flights and when things start turning around, we will get this service.”

RELATED: These airlines are reducing or suspending flights to and from San Diego