"My goodness! For me, I would say no trains. Stop the the train service," said Dr. Patt Abbott. 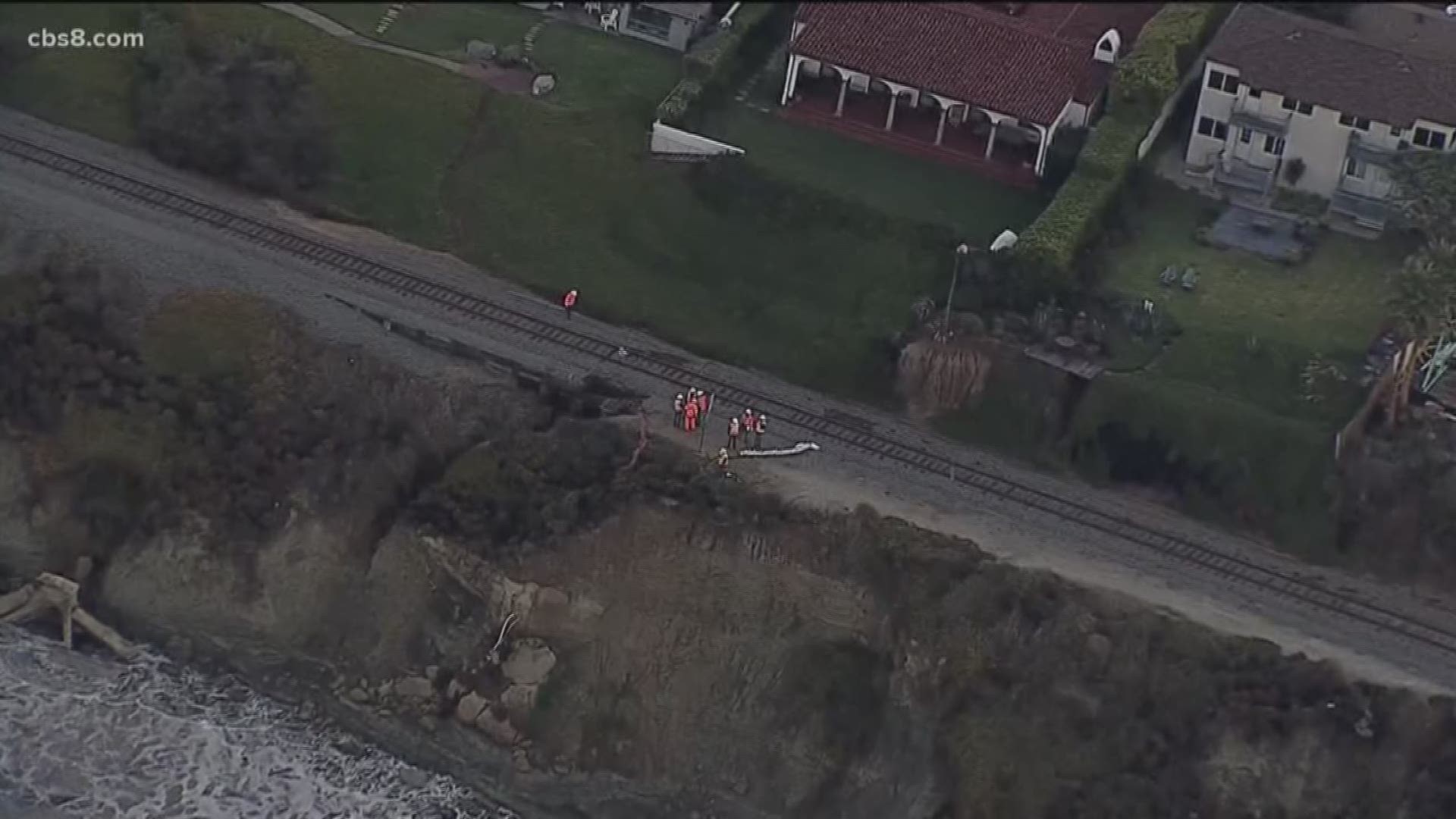 DEL MAR, Calif. — The heavy rainstorms over the last 48 hours caused a cliff collapse Friday next to the train tracks along the Del Mar Bluffs just south of Coast Boulevard which support COASTER, Amtrak, and BNSF operations.

At this time, all trains can safely operate at restricted speeds through the area based on site reviews and inspections conducted by railroad engineers.

"My goodness! For me, I would say no trains. Stop the the train service. I do not want to be on a train like that. I am not a risk taker," said geologist, Dr. Patt Abbott.

NCTD and its contractors will have personnel on-site monitoring trains as they pass through the area until repairs have been completed on the tracks.

Dr. Abbott pointed out there are gullies feeding rushing water right into the area, and the ice plants are also adding to soft crumbling rock.

"You are putting structures to hold up weak rocks - weak crumbly rocks you can crush them into your hands. Gravity is going to pull those cliffs into the sea," he said.

In order to repair the washout area, NCTD will be closing the tracks south of Solana Beach train station and implementing bus replacement service beginning at 6:00 a.m. on Saturday, November 30, 2019.

Passengers will be bus bridged between the Solana Beach train station and Santa Fe Depot. Northbound COASTER passengers who board the COASTER south of Solana Beach station will be bussed all the way to Oceanside Transit Center.

Passengers between Solana Beach station and Oceanside Transit Center going north will be served by the train per the regular schedule.

“Safety is NCTD’s top priority,” said NCTD Executive Director Matthew Tucker. “NCTD is committed to acting proactively to ensure that passenger and freight operations can be safely operated.  NCTD and the San Diego Association of Governments (SANDAG) are advancing phased improvements to make the Bluffs more resilient and prevent service impacts like this washout.”

The repairs for the washout will require excavating, setting new steel plates in place, and backfilling with concrete slurry to shore the bluff material and ensure the safety of the Bluffs.

Dr. Abbot pointed out that they have been putting band aids on more band aids.

"You see the wall has failed. The column is useless and mother nature putting tracks into grave danger," he said.

Residents said they are getting more and more weary.

"I feel like it is not going to be safe much longer," said Catalina Qualantone.

"Odds are it is going to be more unstable there. Going to have to figure it out," said Mike Qualantone.

It is not just the trains. Dr. Abbot said the weight from homes, plants, and rain have all put stress on soft rocks while waves repeatedly crash below.

He said the best thing is to back off.

"As a geologist, those train tracks cannot stay there the way they are," said Dr. Abbot.