If the current weather forecast holds, SDG&E does not anticipate the need for further Public Safety Power Shutoffs on Tuesday. 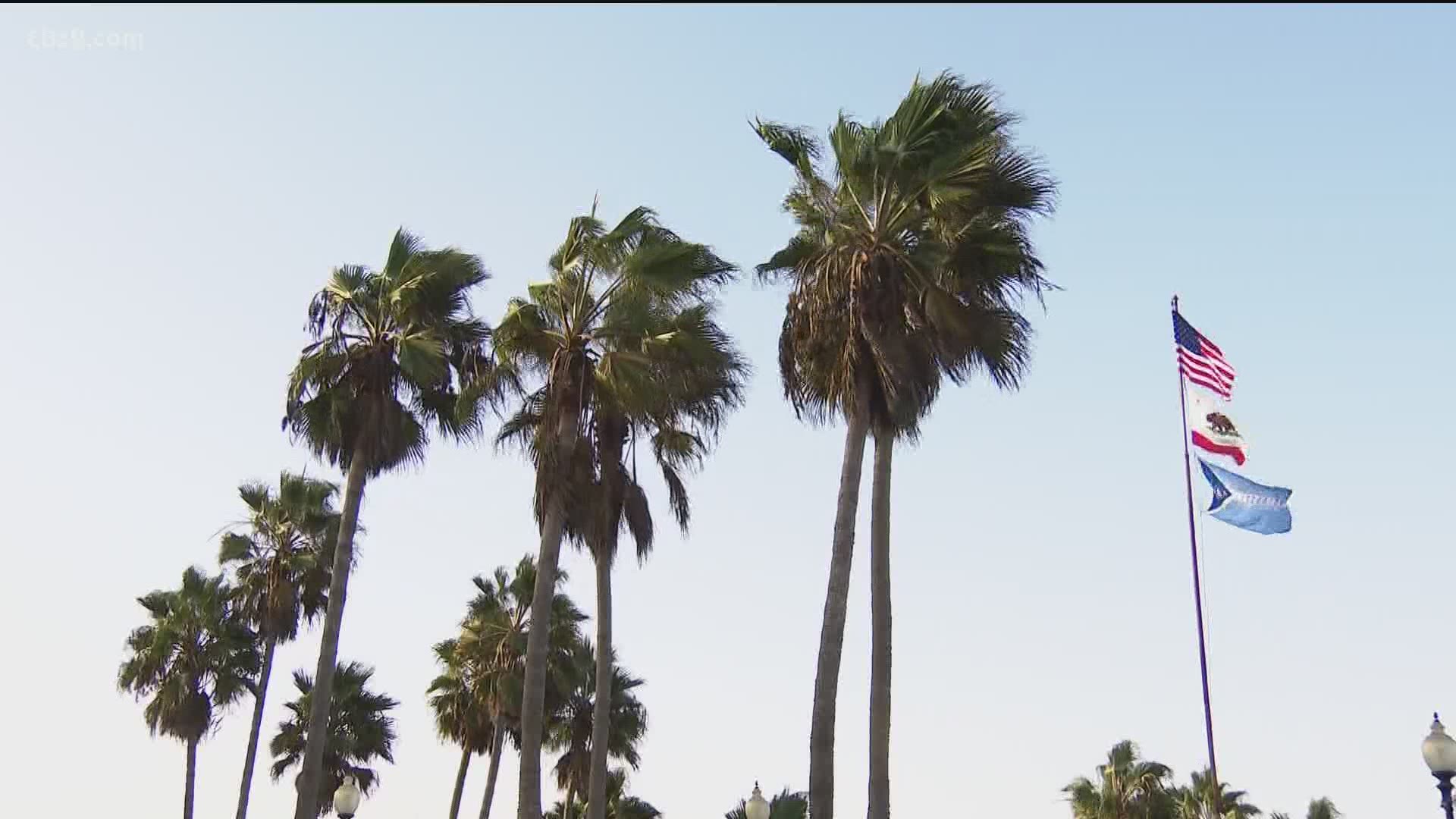 SAN DIEGO COUNTY, Calif. — Strong Santa Ana winds forecast for San Diego County Monday and Tuesday, come with dangerous fire weather conditions, the National Weather Service said. To reduce the risk of wildfire in some parts of North County, SDG&E notified approximately 21,480 residents over the weekend that it would possibly have to turn off power Monday and Tuesday.

About 10 a.m. Monday, the utility shut off power to nearly 3,000 customers in Fallbrook. Around 5 p.m., SDG&E announced power had been restored for those residents.

"If the current weather forecast holds, SDG&E does not anticipate the need for further Public Safety Power Shutoffs on Tuesday," the utility reported on its website.

Power shutoffs are approved by state regulators as a safety tool to mitigate fire risk during dangerous weather conditions.

The winds are expected to calm by Tuesday night, then temperatures throughout the county will warm to slightly above average by Thursday, forecasters said.

"We’re going to monitor extremely closely, continuously into the night and into the day tomorrow, until the threat passes," said Brian D'Agostino, the Director of Fire Science at SDG&E.

D'Agostino said customers in Deluz, Fallbrook and Camp Pendleton could see strong winds over the next two days. He said high winds will be combined with extremely low relative humidity.

This all happening on the 17th anniversary of the Cedar Fire, one of the largest wildfires in California history, fueled largely by Santa Ana winds. It started south of Ramona and quickly moved to San Diego burning more than 273,000 acres back in October of 2003. It destroyed more than 2800 buildings, the majority of them homes. 15 people were killed including a firefighter.

The Cedar Fire is a reminder of just how important it is take precautions.

"During Santa Ana’s peak wind gusts can usually get into 30 to 35 [miles per hour]. Our models are indicating it’s going to be way stronger than that," said D'Agostino.

He said residents should plan ahead and have cell phones, backup batteries and laptops fully charged.

"These winds could be damaging and will create a period of critical fire weather conditions in favored areas through Tuesday," NWS said.

Wind speeds are really starting to pick up this morning in Oceanside. @SDGE is warning more than 21,000 North SD County customers of potential power shut-offs over wildfire concerns. Wind is expected to continue into Tuesday. pic.twitter.com/7ceJSH9Aic

Strong west winds will blow over the mountains and parts of the deserts with maximum gusts of 50-60 mph in wind-prone locations, the NWS said.

The weather service said the strength of wind is highly uncertain for San Diego County.

"Highest winds may not surface at lower elevations, but remain stuck on the ridges and over far northwest parts of the county, where gusts could reach 60 mph," NWS said. "Still, locally gusty winds and low relative humidity will lead to enhanced fire weather conditions Monday through Tuesday."

A wind advisory was scheduled to be in effect from 2 a.m. to 5 p.m. Monday for the San Diego County coastal areas and valleys, the NWS said.

"Customers who were notified should be prepared to activate their personal emergency plan to keep their family and pets safe," SDG&E said. "SDG&E will continue to provide customers with updates when there is more certainty about forecasted weather conditions."

Due to elevated fire weather conditions and forecasted Santa Ana winds coming from the north, we have notified ~21K residents that we may turn off power to reduce wildfire risk Mon. & Tues. in south Orange County and north San Diego. Learn more at https://t.co/Nu4yeSS2Bp pic.twitter.com/RaGtZlS8dq