For San Diegans heading home from work Monday, the remnants of the "bomb cyclone" that exploded earlier in Northern California made the local commute a wet one. 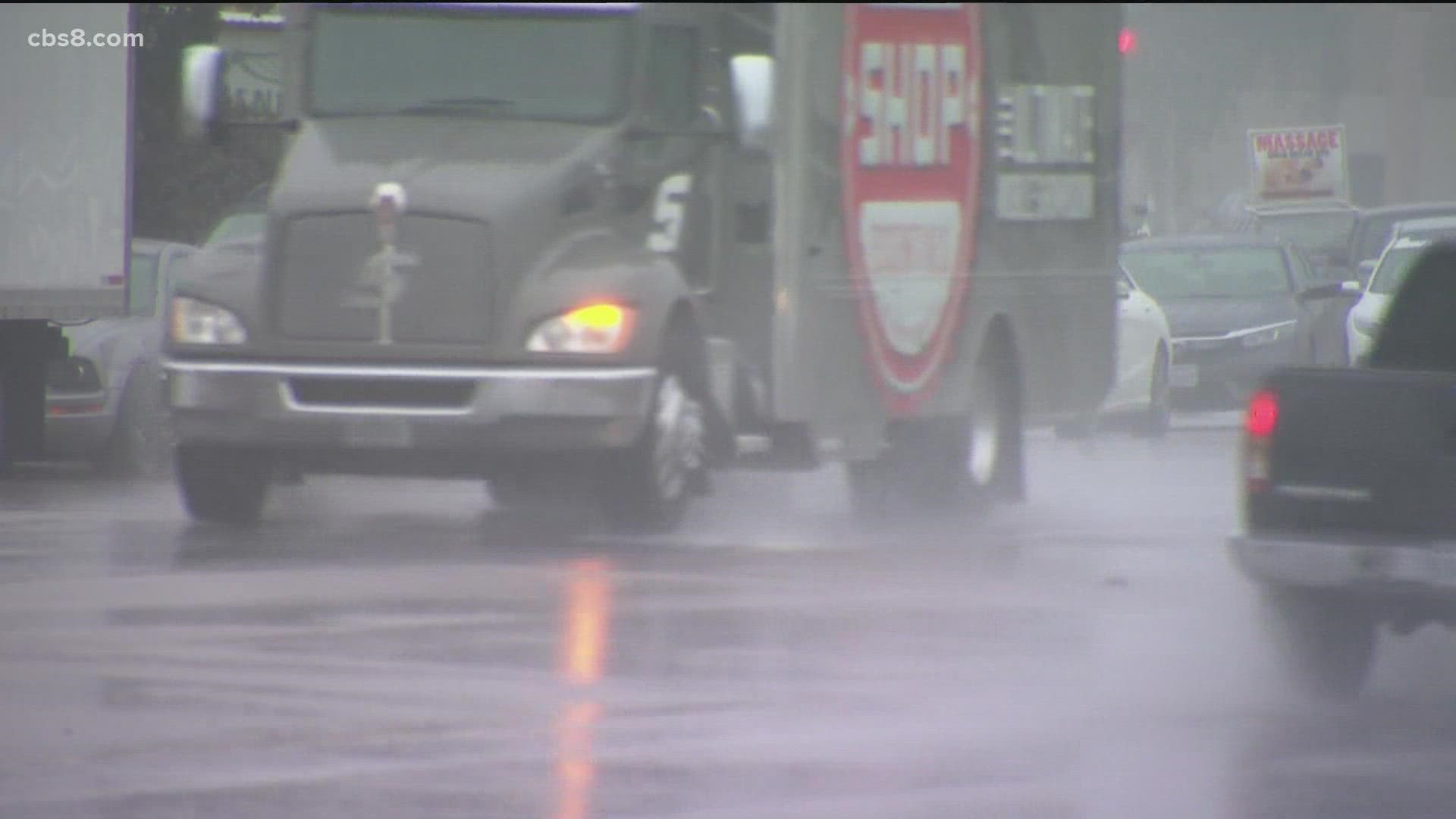 SAN DIEGO COUNTY, Calif. — A cold front moving down the California coastline brought rain to San Diego Monday afternoon. As the storm rolled in thousands of SDG&E customers lost power, according to the utility's outage map. Most had their power back by 8 p.m.

At one point, over 8,000 customers were experiencing outages in coastal and inland neighborhoods.

As the storm system rolled through San Diego light to moderate rain was expected before 11 p.m.

The showers are likely to drop up to two-fifths of an inch of moisture along the coast and in the inland valleys, and as much an inch in parts of the East County highlands, including Julian and Palomar Mountain, the National Weather Service said.

Desert locales should get no more than a tenth of an inch or so, the NWS advised.

Rainfall totals as of 5:30 p.m. showed most areas under a quarter of an inch.

🌧️Checking in on rainfall totals. Mainly under a quarter of an inch so far. @CBS8 @thecwsandiego #cawx pic.twitter.com/sghnMZ4TJs

Meanwhile, gusty westerly winds were expected to diminish in as the rainfall subsides, making way for a warming trend and dry conditions expected to prevail from Tuesday through the weekend, according to meteorologists.

A wind advisory will remain in effect until 2 a.m. Tuesday for the San Diego County deserts and mountains. South winds becoming west were expected to range from 20 to 30 mph in the afternoon, with gusts to 55 mph expected.

The weather service warned that the gusty winds could blow around unsecured objects, tree limbs could be blown down and a few power outages may result. Drivers -- especially those in high-profile vehicles, were urged to use caution.

A high rip current risk was expected at all beaches Monday through early Wednesday. A long period west swell, and a long period south swell may result in surf of 6-8 feet, with sets up to 10 feet possible in southern San Diego County, NWS said.

For San Diegans heading home from work Monday evening, the remnants of the "bomb cyclone" that exploded earlier in Northern California made the local commute a wet and windy one.

"People drive stupid out here in the rain, because they don't ever have to deal with it," complained Glenn Wickman, who moved to San Diego from Tennessee.

He joked that San Diego drivers could use some lessons.

"I left just in time for that," she told News 8. "It's a little bit lighter here, but still pretty rough today!"

Tuesday was predicted to be a dry, cool day, followed by warmer weather and weak offshore flow in the second half of this week.

Daytime highs should increase to above seasonal norms with some highs in the 90s in the valleys and especially lower deserts by Thursday, with a slight cooling trend over the weekend.

The storm system was expected to bring southwest and northwest winds with gusts of 20-25 knots in the outer waters and closer to 20 knots across the inner waters Monday afternoon and Tuesday. Combined seas of 6-10 feet were expected, highest in the outer waters. 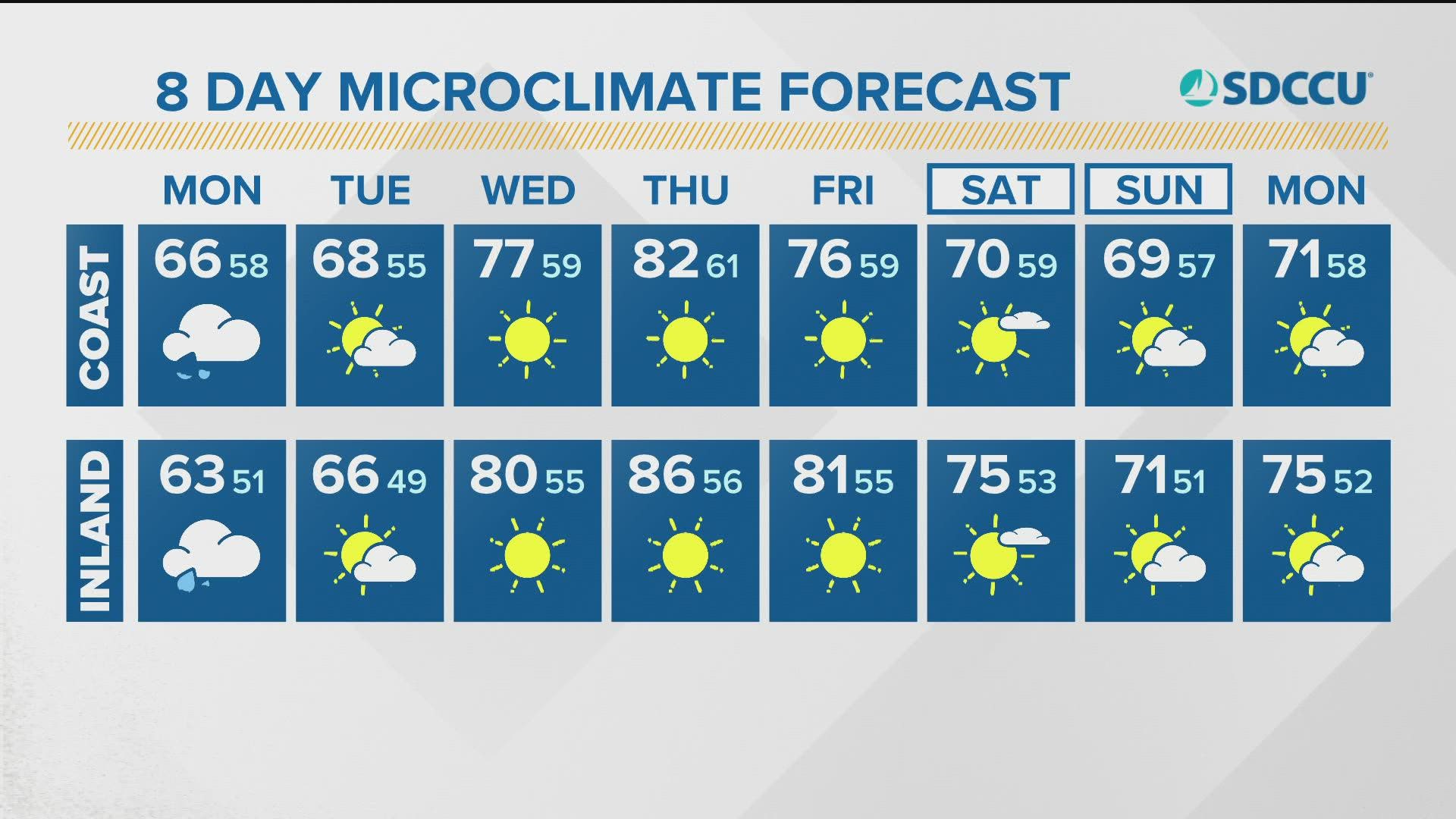 RELATED: Rain expected to arrive in San Diego on Monday 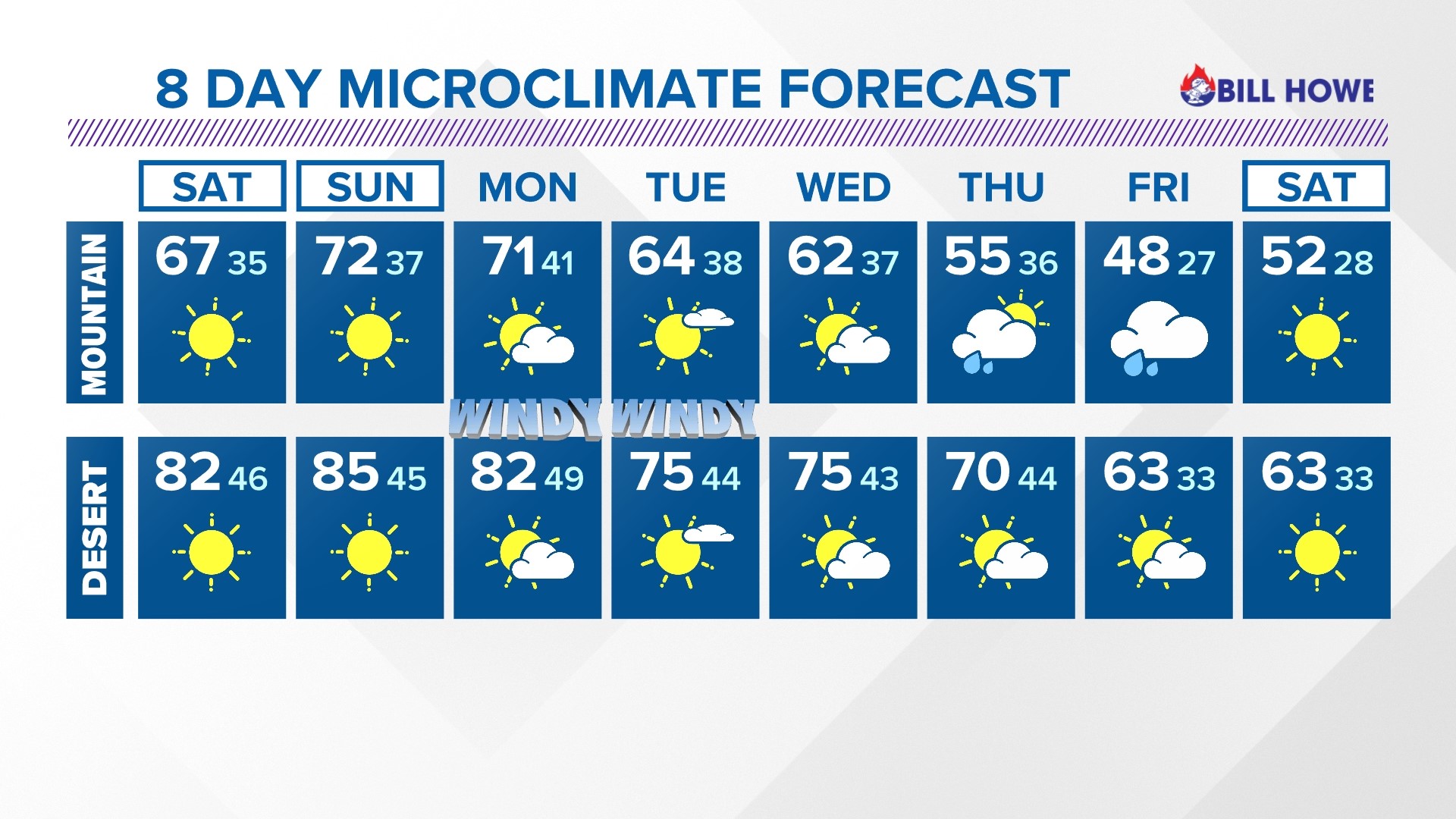 King Tides are back and so are near seasonal temps