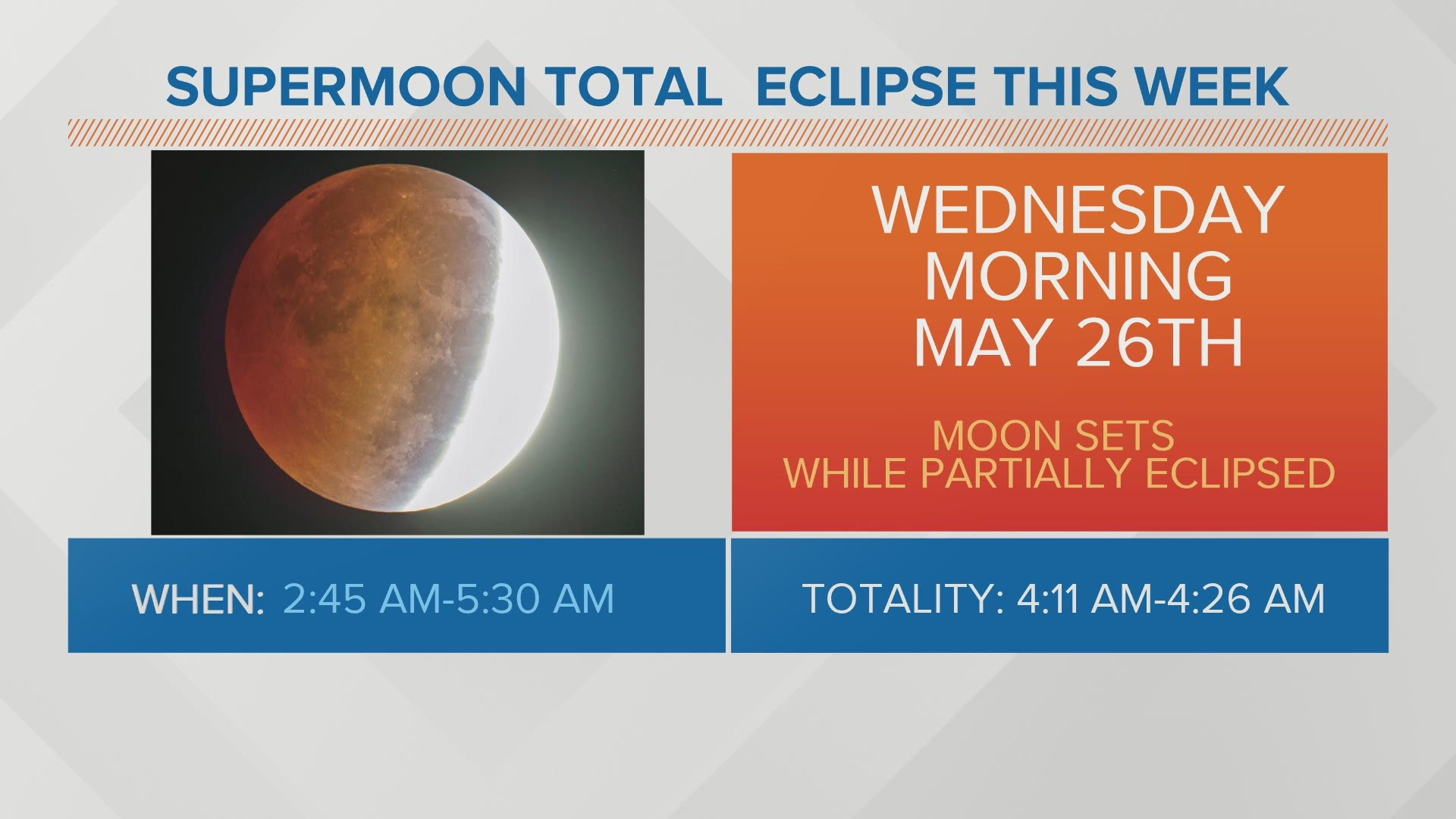 SEATTLE — Look up, skywatchers! There will be a total eclipse of a supermoon early Wednesday morning. It will the first total lunar eclipse visible for most of the U.S. since Jan. 21, 2019.

But Washingtonians will have to get up early to see it.

The lunar eclipse begins at 2:45 a.m. PT and ends around 5:30 a.m. PT. However, the moon will set while it is still partially eclipsed. The total midpoint of the eclipse is shortly after 4 a.m. So, you will have to get up earlier than usual.

Unlike solar eclipses, lunar eclipses are visible anywhere you can see the moon. The moon will be in the western sky at the start of the eclipse and will set while it is still partially eclipsed. So, now all we need is clear skies.

Unfortunately, it currently looks mostly cloudy Wednesday morning with a deck of marine clouds over western Washington, but there is a chance of some breaks in the clouds.

If you move around, you might be able to see the eclipse. However, if you’re feeling inspired and energetic, it will likely be clear east of the Cascades. Cities like Ellensburg, Wenatchee, and maybe Cle Elum should be able to see the lunar eclipse.

Here are the important times (in PT) for the eclipse:

Wednesday’s lunar eclipse will happen when the moon will be called the “super flower blood moon,” which is a mouthful.

This week’s full moon will be a “supermoon,” which occurs when a moon is at its closest approach to Earth. It will appear about 7% larger than normal and is the second supermoon of the year. In addition to being a supermoon, this week's full moon has also earned the nickname “flower moon,” as it occurs during May, a month when flowers are blooming in abundance.

Total lunar eclipses are also sometimes called "blood moons" as the moon turns red during the eclipse, but this isn’t a sure thing.

When the moon is eclipsed, the light you see reflecting off of it is from sunset and sunrise light from around the world. From the moon, the earth will look like a dark ball with light around the edges. This ring of light is normally the usual red color you see in the sky at sunrise or sunset when it is clear.

However, if it turns out to be unusually cloudy along the edge of the earth, you can end up with a very dark-looking moon during totality - so we will have to wait to see.

If you miss the eclipse, you will have to wait until May 16, 2022, for the next total lunar eclipse visible from Seattle. But the good news is it happens in the early evening.