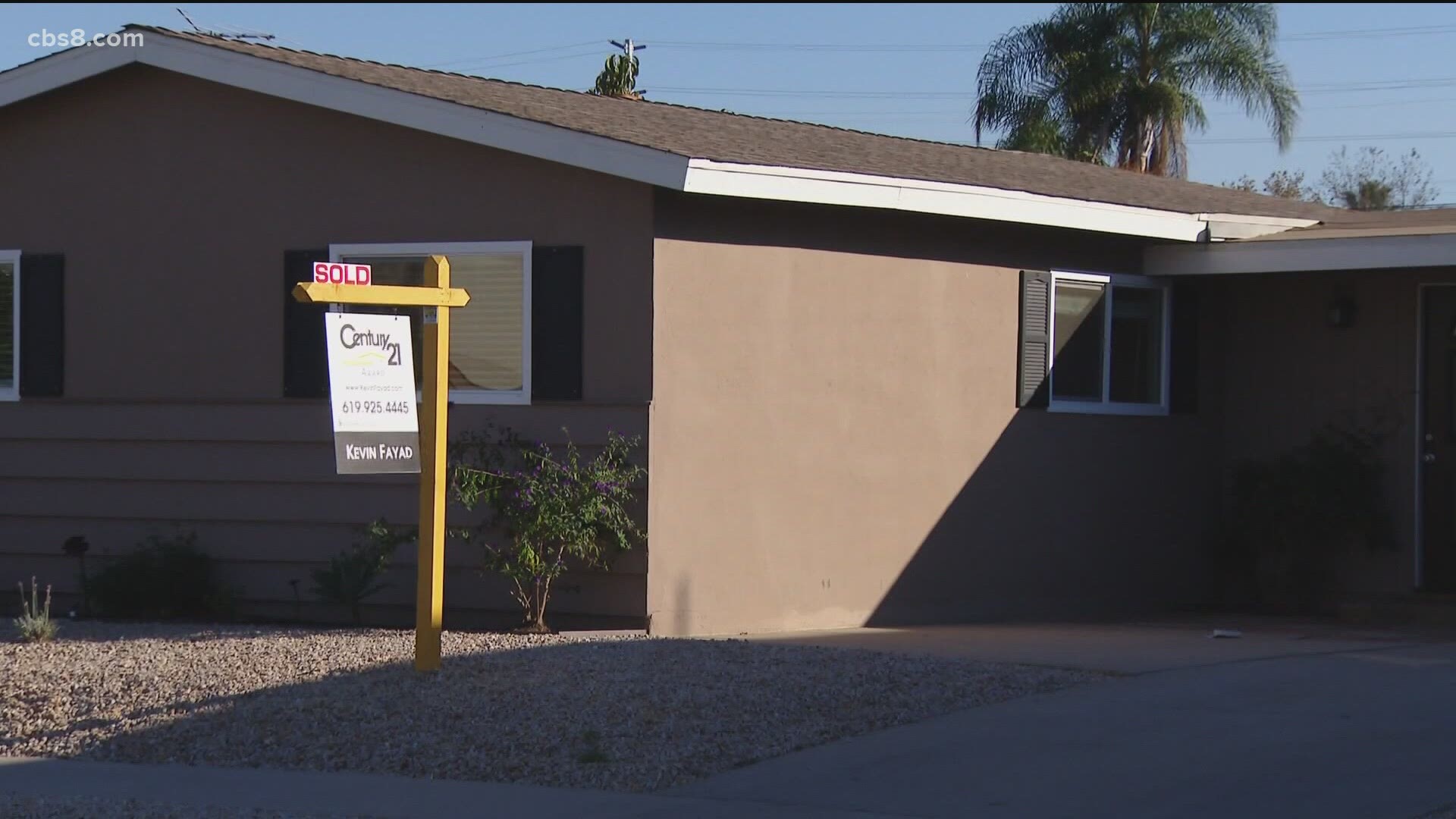 SAN DIEGO COUNTY, Calif. — The median price of an existing, single-family detached home in San Diego County rose to $825,120 in April, an increase from $800,000 a month ago, mirroring a spike across California that brought the state's median price above the $800,000 benchmark for the first time, a real estate group said Monday.

California's median home price was $813,980 in April, with the rise fueled by heated market conditions and a shortage of homes for sale, according to the California Association of Realtors.

"Not only do skyrocketing home prices threaten already-low homeownership levels and make it harder for those who don't already have a home to purchase one, it also brings to question the sustainability of this market cycle," C.A.R. Vice President and chief economist Jordan Levine said. "As vaccination rates increase and the state reopens fully, higher home prices will hopefully entice prospective sellers who have held off putting their homes on the market during the pandemic to feel more comfortable listing their homes for sale, which would alleviate pressure on home prices."

Meanwhile, closed escrow sales of existing, single-family detached homes in California totaled a seasonally adjusted annualized rate of 458,170 in April. The statewide annualized sales figure represents what would be the total number of homes sold during 2021 if sales maintained the April pace throughout the year.

April home sales increased on a monthly basis for the third consecutive month, rising 2.6% from 446,410 in March and up 65.1% from a year ago. The sharp yearly sales jump was expected as the housing market was hit hard by the coronavirus shutdown last year, when home sales dropped more than 30% over the previous April.

"I'm not easily shocked, but $825,000 being the median housing price in San Diego is amazing," said Matt Battiata of Battiata Real Estate and eXp Realty of California.

Battiata said this spike in median cost for a single-family home has been driven in large part by a historically low number of houses on the market: only 33,000 homes currently for sale county-wide.

"It is fueled by really, really low inventory, which is caused partially by COVID," he told News 8. "People don't want to put their houses on the market."

Low interest rates and the expectation that they will rise again in the future may also be playing a role in this current frenzy.

"And so that is probably motivating buyers even more so, even though the prices are high, to buy now before the interest rates go up," he added.

Wei said that while price growth continues to be strong, it may not be as strong over the coming year, but we will not see a dramatic drop in prices..

He said there are number of factors at play, including interest rates possibly creeping up in the latter part of the year, as well as housing supply increasing as we emerge from the pandemic, that could lead to a softening in the market

The biggest increase from last month was seen in the San Francisco Bay area, which saw its median home price jump from $1.225 million in March to $1.328 million.

"California continues to experience one of the hottest housing markets as homes sell at the fastest pace ever, with the share of homes sold above asking price, the price per square foot and the sales-to-list price all at record highs, while active listings remain at historic lows," C.A.R. President Dave Walsh said.

"The high demand and shortage of homes for sale, driven by these market factors, continued to drive up home prices and shatter the record-high set just last month."

The median number of days it took to sell a California single-family home hit another record low of 7 days in April, down from 13 days in April 2020.

To take a closer look at highlights from this new report, click here.