Congress and The White House appeared optimistic a deal would be worked out to extend some additional unemployment money, but it will likely be less than $600 weekly 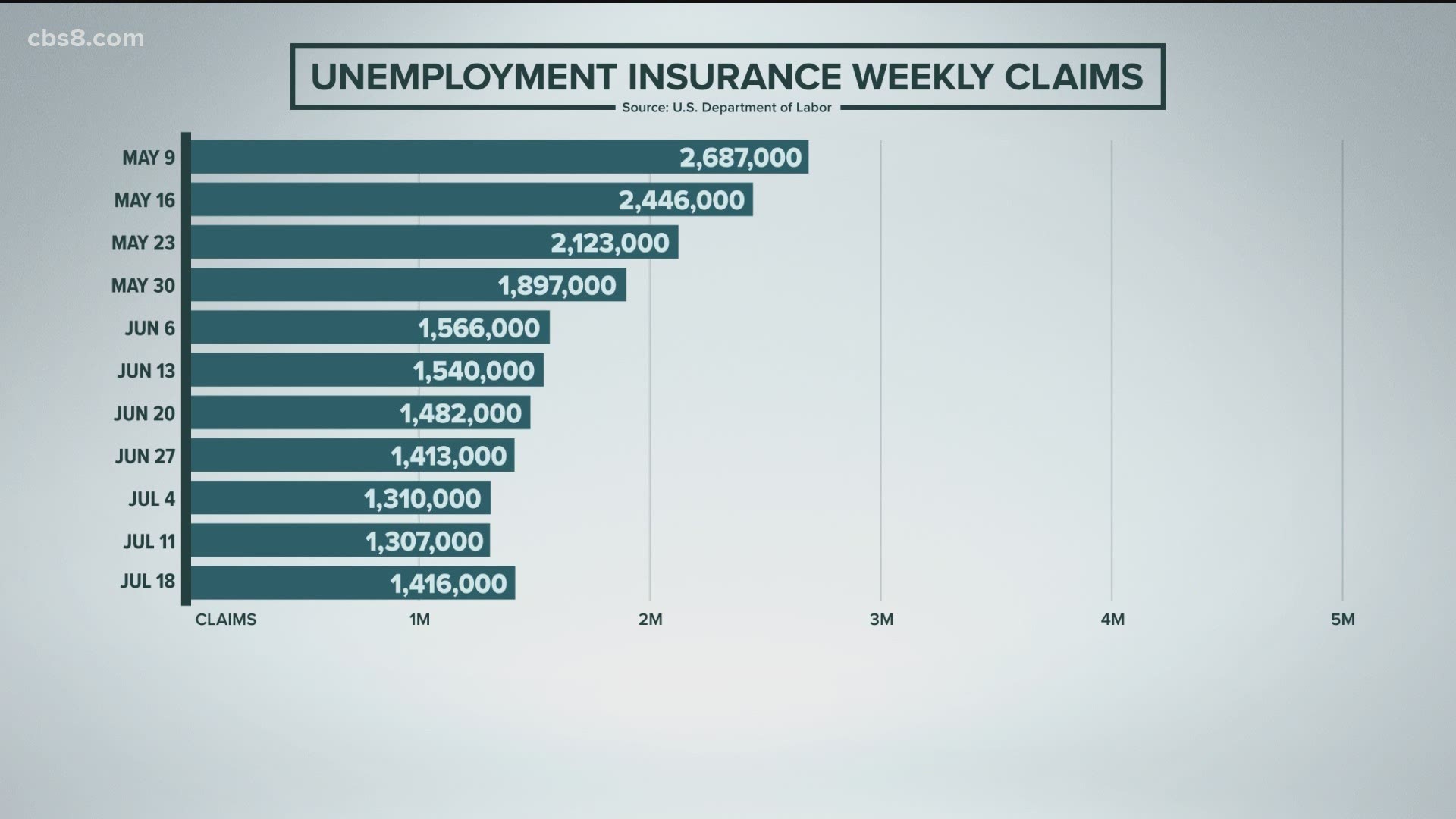 “Without any further stimulus assistance come August 1, I will be making 12% of my gross wages in benefits,” said Glenn Telega, a furloughed entertainment worker.

The potential reduction in unemployment benefits comes as California sees an increase in coronavirus (COVID-19) cases. The U.S. Labor Department reported Thursday Californians filed 292,700 initial claims last week, an increase of 8,000 claims from the week before. It coincides with a near-statewide order for more industries to close. As of July 8, SANDAG estimated the San Diego region’s unemployment at 14.3%.

Congress and The White House appeared optimistic a deal would be worked out to extend some additional unemployment money, but it will likely be less than $600 weekly.

“Instead of $600 additional, it might be more like $400 or you might see a variation of that in some other form," predicted California State University-Sacramento Economist Sanjay Varshney.

Critics of the original deal believe the $600 payment was too much money and disincentivized unemployed people from returning to work. A University of Chicago study found nearly 70% of unemployed Americans got more in jobless payments than they lost in wages.

“That is a concern, but you should keep the overall environment in mind in which this is playing out,” said Till von Wachter, an economist at the California Policy Lab.

Researchers estimate the money helped keep 1.75 million from receiving unemployment benefits below the federal poverty line as they waited for businesses to reopen.

“It will drastically hurt our income,” said Phyllis Mitchum, who was furloughed in May. "There's a large percentage of us that were furloughed and are willing and able to go back to our full-time jobs as soon as our employers call us back.”

Employment Development Department data shows the agency has distributed nearly $50 billion to unemployed workers since March. It has processed 8.7 million claims in 4.5 months, which is more than it processed in all of 2010, the worst year of the Great Recession.

Economists point out benefit recipients then spend their money at businesses that are still open.

SANDAG estimates more than 95% of businesses in the San Diego region are small businesses, defined as having fewer than 500 employees. Many are in the tourism and entertainment industries, which were hardest hit by the economic fallout from the pandemic.

A survey of small business conducted on June 27 found nearly 12% of owners do not expect to recover. Less than 8% said they did not expect to recover in a similar April survey. Researchers estimate about one in four California small businesses are at high risk of permanent closure, which, researchers estimate, could mean up to 200,000 lost jobs in the San Diego region alone.

Unemployment benefits during pandemic reach about $50 billion in California. End of $600 federal stimulus payments, eligibility for parents of school children.

For more on this latest news release, visit: https://t.co/LIqIilyBMP#PressRelease #News