Afghanistan officials say the U.S. attack on a tunnel complex in eastern Afghanistan with the largest non-nuclear weapon ever used in combat by the U.S. military has left 36 Islamic State group fight 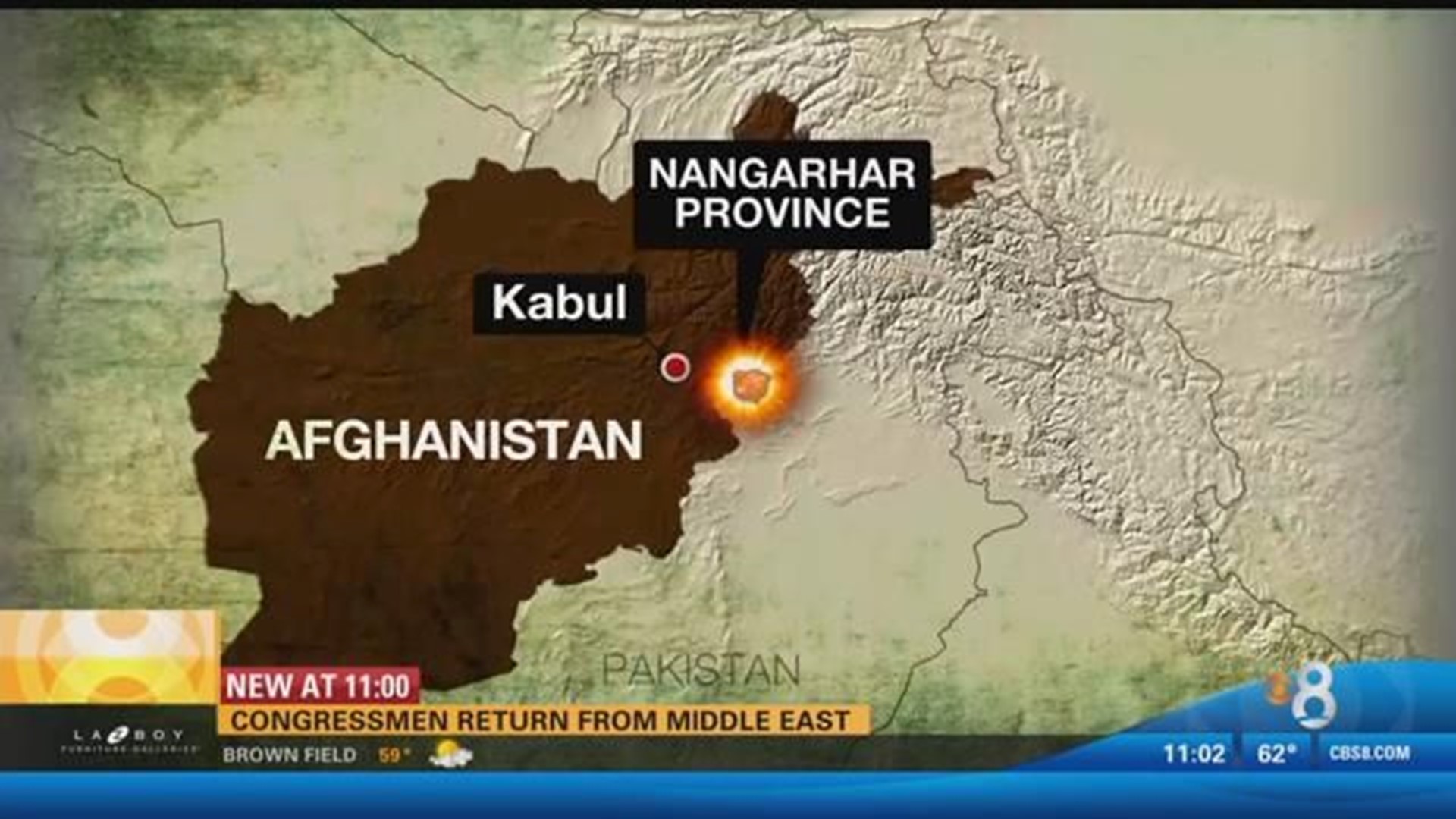 KABUL, Afghanistan (AP) — A strike by the largest non-nuclear weapon ever used in combat by the U.S. military killed 36 Islamic State group militants and left no civilian casualties, hitting a tunnel complex in the remote mountains of eastern Afghanistan, Afghan officials said Friday.

The massive bomb terrified villagers 20 miles away across the border in Pakistan with a blast they described as earsplitting.

American and Afghan forces have been battling the Taliban insurgency for more than 15 years. But the U.S. military brought out the biggest conventional bomb in its arsenal for the first time to hit the Islamic State group, which has a far smaller, but growing presence in Afghanistan — an apparent reflection of President Donald Trump's vows for a more no-holds-barred campaign against the group.

The strike was carried out against an Islamic State group tunnel complex carved in the mountains that Afghan forces have tried repeatedly in past weeks to assault in fierce fighting in recent weeks in Nangarhar province, Afghan officials said. The Afghan Ministry of Defense said in a statement that several IS caves and ammunition caches were destroyed by the bomb.

"This is the right weapon for the right target," said U.S. Gen. John W. Nicholson, NATO commander in Afghanistan, at a news conference.

The bomb, known officially as a GBU-43B, or massive ordnance air blast weapon, unleashes 11 tons of explosives. Footage put out by the Pentagon showed the bomb slamming into a mountainside overlooking a river valley, causing a giant blast that overwhelms the landscape then sends up a massive column of black smoke. Agricultural terrasses are visible in the footage, but no population centers.

The Islamic State group's news agency Aamaq denied that the strike caused any deaths or wounded in a one-line statement put out on its social media channels, citing a "source" within the group.

But Gen. Daulat Waziri, spokesman for the Afghanistan Ministry of Defense, said 36 IS fighters were killed, and that the death toll could likely rise. He said Afghan forces were at the tunnel complex assessing the damage.

He said the bombing was necessary because the complex was extremely hard to penetrate, with some tunnels as deep as 40 meters (43 yards).

"It was a strong position and four times we had operations (attacking the site) and it was not possible to advance," he said, adding that the road leading to the complex "was full of mines."

Pakistani villagers living near the Afghan border said the explosion was so loud they thought a bomb had been dropped in their village by U.S. warplanes targeting terrorists in Pakistan.

"I was sleeping when we heard a loud explosion. It was an earsplitting blast," said Shah Wali, 46, who lives in the village of Goor Gari, 15 kilometers (9 miles) from the border with Nangarhar. "I jumped from my bed and came out of my home to see what has gone wrong in our village."

Wali said dozens of other villagers also came out of homes and later he went near the border, where he met with other residents. He said he could see smoke in the sky.

Mufti Khan, a resident of Achin in Nangarhar, said, "It was between seven or eight local time when it happened. The whole house was shaking. When I came out of my house I saw a large fire and the whole area was burning."

Another Achin resident, Mohammad Hakim, voiced his approval for the strike, saying "We are very happy and these kinds of bombs should be used in future as well, so Daesh is rooted out from here," using the Arabic acronym for the Islamic State group.

"They killed our women, youths and elders sitting them on mines. We also ask the Kabul government to use even stronger weapons against them," Hakim added.

The U.S. estimates 600 to 800 IS fighters are present in Afghanistan, mostly in Nangarhar. The U.S. has concentrated heavily on combatting them while also supporting Afghan forces battling the Taliban. President Donald Trump called Thursday's operation a "very, very successful mission."

"I want a hundred times more bombings on this group," said Hakim Khan, 50, a resident of Achin district, the site of the blast.

Inamullah Meyakhil, spokesman for the central hospital in eastern Nangarhar province, said the facility had received no dead or wounded from the attack.

District Gov. Ismail Shinwari said there is no civilian property near the airstrike location.

The office of President Ashraf Ghani said there was "close coordination" between the U.S. military and Afghan government over the operation in Achin. It said they were careful to prevent any civilian casualties.

The Site Intelligence Group, which tracks extremist organizations, reported Friday on a statement from the Afghan Taliban condemning the U.S. for its "terrorist" attack.

The statement said it is the responsibility of Afghans, not the U.S., to remove the Islamic State group from the country. The two militant movements are rivals of each other.

The U.S. maintains over 8,000 troops in Afghanistan, training local forces and conducting counterterrorism operations. Over the past year they have largely concentrated on thwarting a surge of attacks by the Taliban, who have captured key districts, such as the Helmand province, which American and British troops had fought bitterly to return to the government.