An investigation was underway Thursday after a car fire in Lakeside led to the discovery of a body. 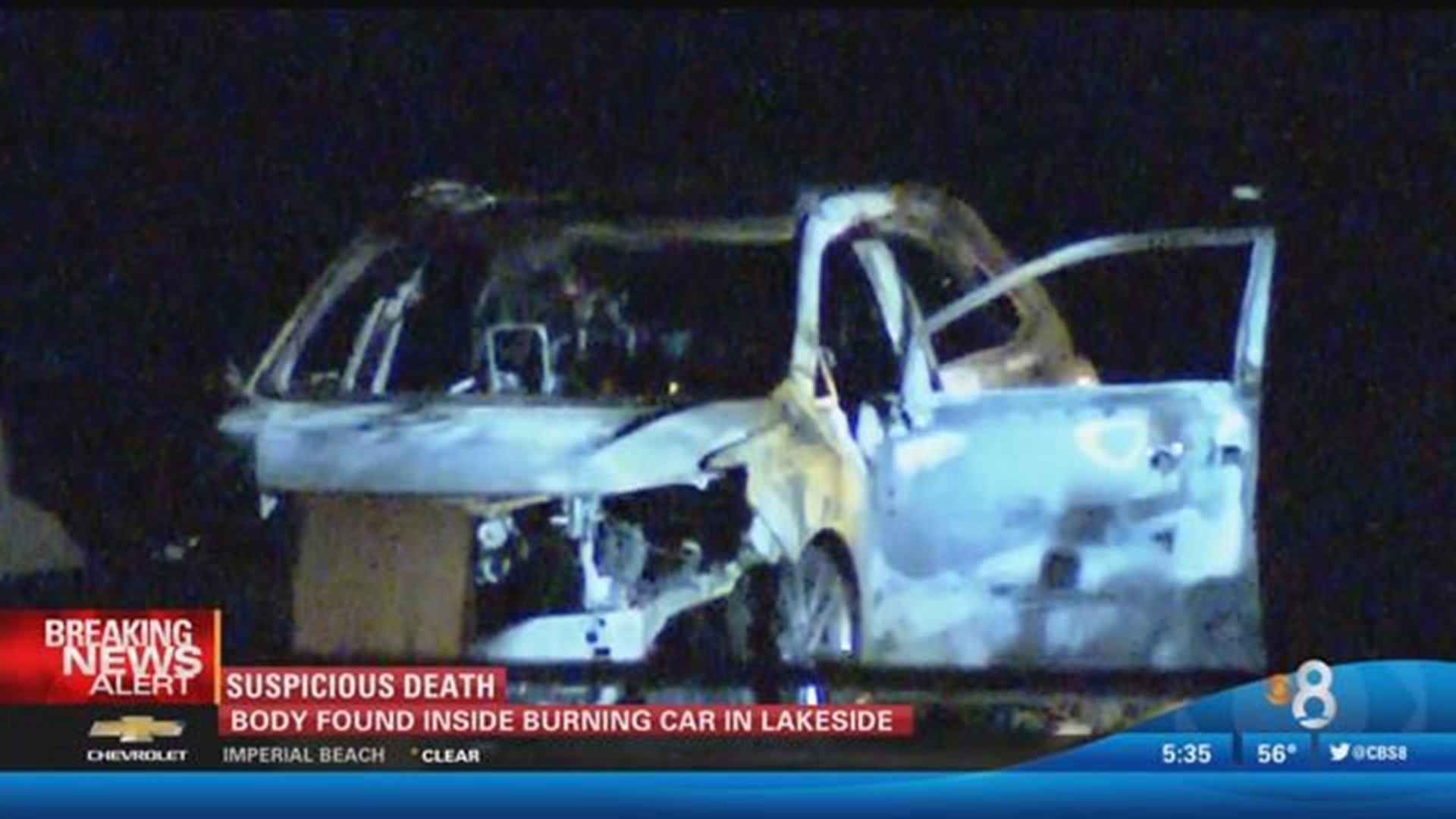 LAKESIDE (CBS 8) - An investigation was underway Thursday after a car fire in Lakeside led to the discovery of a body.

Deputies were initially sent to the 11000 block of Mast Boulevard around 11:10 p.m. Wednesday, according to sheriff's officials.

"My wife came down and told me she heard some explosion noises," said Andrew Borcher." And said there's a fire back behind our house."

That's when Borcher grabbed his cell phone and recorded a car on fire down the street.

"The flames were ten, fifteen-feet-high," said Borcher. "And then I also heard popping, explosions and sounded like fireworks."

Emergency workers arrived on scene after receiving 911 calls of a burning car from several neighbors who heard the loud popping noises just blocks away.

The fire department was able to knock down the fire, but when authorities took a closer look, they discovered a body inside. That sparked an investigation that spilled into Thursday morning.

"When deputies arrived on scene they found a vehicle parked off to the side of the road fully engulfed in flames. Once the fire department responded and extinguished those flames and the deputies did a closer examination, they found there was a deceased body inside that car," Lt. Ken Nelson, SD County Sheriff's Dept. said.

"They're taking photos, crime scene measurements, trying to determine what evidence is of value here," Nelson said. "They'll collect what they can see, then they'll tow the vehicle back to the crime lab, obtain a search warrant for that and process it for trace evidence and any other items that may be of value to this investigation."

They say the body was found in a burned out Lexus SUV that was registered to 33-year-old Andrea Daves of Santee, but it's not confirmed that's the victim, sheriff's officials said.

Arson investigators say it's not clear what caused the fire or if it was set on purpose. They say the body was so badly burned that it was unclear if the victim is male or female.

It was not immediately clear whether the vehicle had been involved in a crash before it caught fire.

"We're too early on in the investigation to know what we have," Nelson said. "Whether it's a homicide investigation, suspicious death, accidental death, suicide, we don't know."

Authorities said not only will they be scouring the car for evidence, but asking people who live nearby for help.

"We're going to be doing a neighborhood canvas, where we'll be sitting down and speaking with all the neighbors in the area and trying to figure out exactly what they saw, what they heard and whatever info they may have for us," said Nelson.

Borcher said they have had trouble makers in the area before, even another car fire, but nothing like this.

"The fact there's a body, is a little scary to me," said Borcher. "Just because earlier that day I had my kids out playing in the field, they run around - they play back there."