Watch for more details on CBS 8 at 6:30 p.m. EL CAJON (CBS 8) – An El Cajon police officer has been shot by a male suspect, according to police officials. It happened at Ann and Prince Streets. Accord 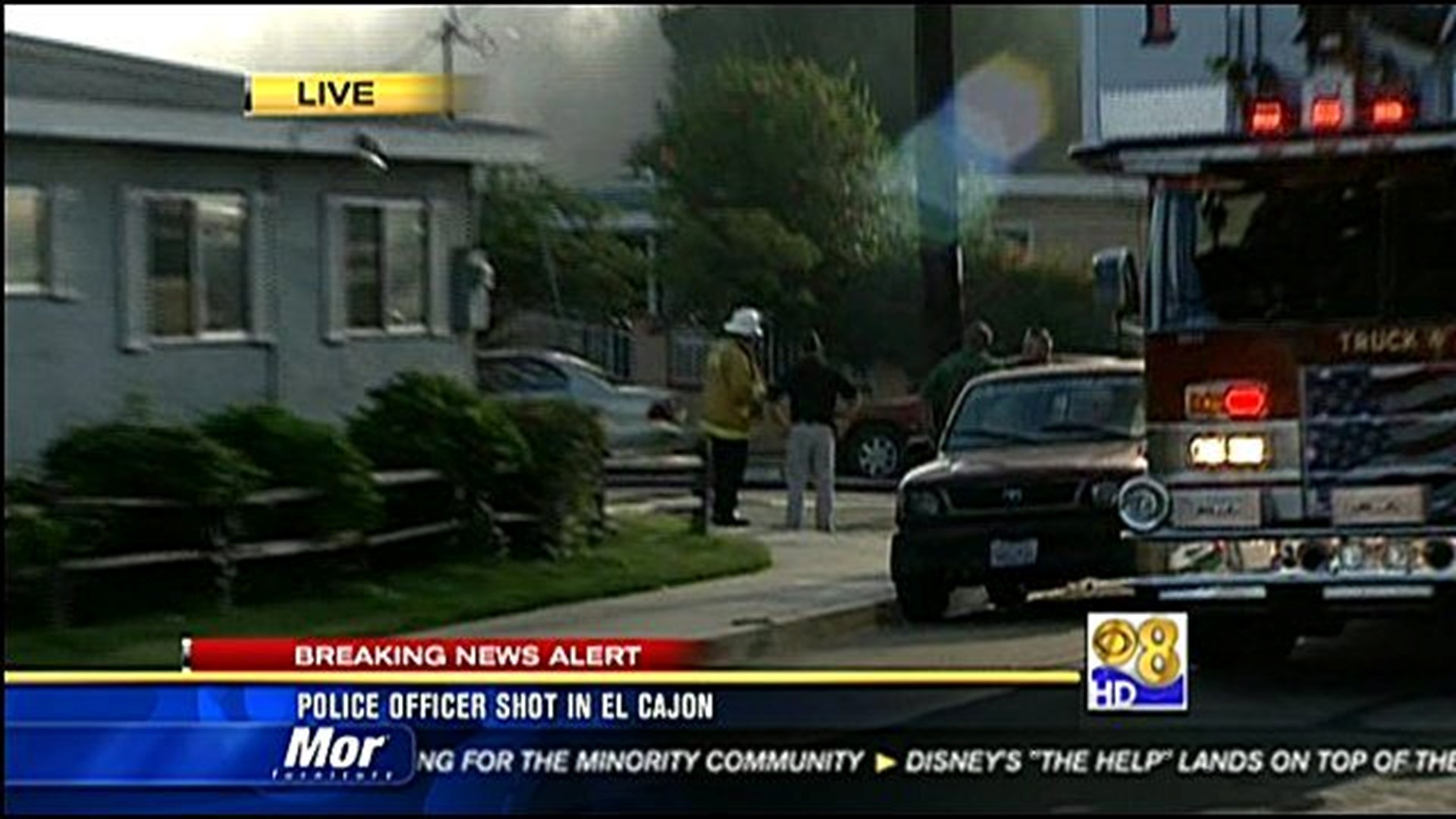 ADVISORY: Please be advised that some of the scenes shown in the video contain graphic elements, which may not be suitable for sensitive audiences.

EL CAJON, Calif. (CBS 8) - Doctors Tuesday upgraded the conditon of an El Cajon police officer wounded in a domestic violence rampage that took the lives of two adults and a child over the weekend.

The body of Rhilee Collier was found inside the cab of her father's pickup truck, which was parked near her grandmother's home. The girl's father is 32-year-old Kevin Collier and it's believed that Collier killed his daughter and mother-in-law Beverli Rakov before opening fire, shooting a veteran police officer in the neck. Collier then allegedly set Rakov's home on fire. Collier reportedly also sent text messages to friends telling them what he had allegedly done.

The El Cajon police officer shot has been identified as 28-year-old Jarred Slocum. During the shooting rampage, Slocum held a hand to his wound to slow the bleeding, while his partner dragged him to safety.

On Tuesday afternoon, fellow officers told News 8 that Slocum was sitting upright and talking to family and friends. He was listed in stable condition.

Police confirmed Monday that the second body found in the home was Collier.  Police earlier verified the discovery of Rakov's body, Collier's mother-in-law.

The El Cajon Police Department received a call reporting suspicious activity just after 5 p.m. Sunday, August 21 in the 1000 block of Prince Street, in a neighborhood between Interstate 8 and El Cajon Valley High School. The caller said a man with a gun entered the house and started a fire, police said.

According to court records, Collier's wife, Alyssa, filed paperwork last Wednesday to end their year-and-a-half-long marriage and asked for custody of their 14-month-old daughter, Rhilee Jean.

Alyssa Collier was not at the house when the gunfire and blaze occurred. A family friend told News 8, she received a text from Rakov, saying that Collier had shown up at the house and taken her "granbaby," and the residence became fully engulfed in flames not long afterward.

Eighty-eight-year-old Frances Yarbrough, mother to Beverli Rakov and grandmother to Alyssa, told News 8 that she's trying to stay strong for Alyssa. Reflecting on her daughter, she said, "She was wonderful. She was my pride and joy because she was the only one I had."

Monday night Alyssa posted the following on her Facebook page:

"Thank you for all the support everyone. No words or actions can fix this... One minute at a time." She also put out this request via the social media website, "If anyone has pictures of me or my family st (sic) any point in my life can you please let me know. All my memories are burned."

Friends say the couple seemed happy and ran a dog breeding business as a hobby, but Kevin Collier's finances and family life recently began to crumble. Kevin, Alyssa and Rhilee used to live in a house in Ramona, which fell into foreclosure. Collier sold it in a short sale just two weeks ago.

Last week, Alyssa filed for divorce citing irreconcilable differences, and Collier moved back to Ramona to stay with his mother, Juanita Ward. Her tax business was closed Monday, according to a sign on the door that listed a family emergency as the reason.

[Video: Killer turned a quiet Sunday into a day of terror]

The American Red Cross was providing food and shelter to people evacuated from their homes because of the fire. Most neighbors were allowed to return home, but the residents of the houses immediately adjacent to the Rakov home reportedly may have to stay out for several more days.

You can donate to the Alyssa Rakov Fund at any Chase Bank. There's also a fundraiser on Thursday, August 25 from 6 p.m. to 10 p.m. at:

The family is accepting cash, gift cards, and clothes. They also request that friends bring photos of Alyssa and Rhilee to the fundraising event Thursday.