A controversial military training exercise, known as "live-tissue trauma training" involving the killing of animals has been captured on videotape. 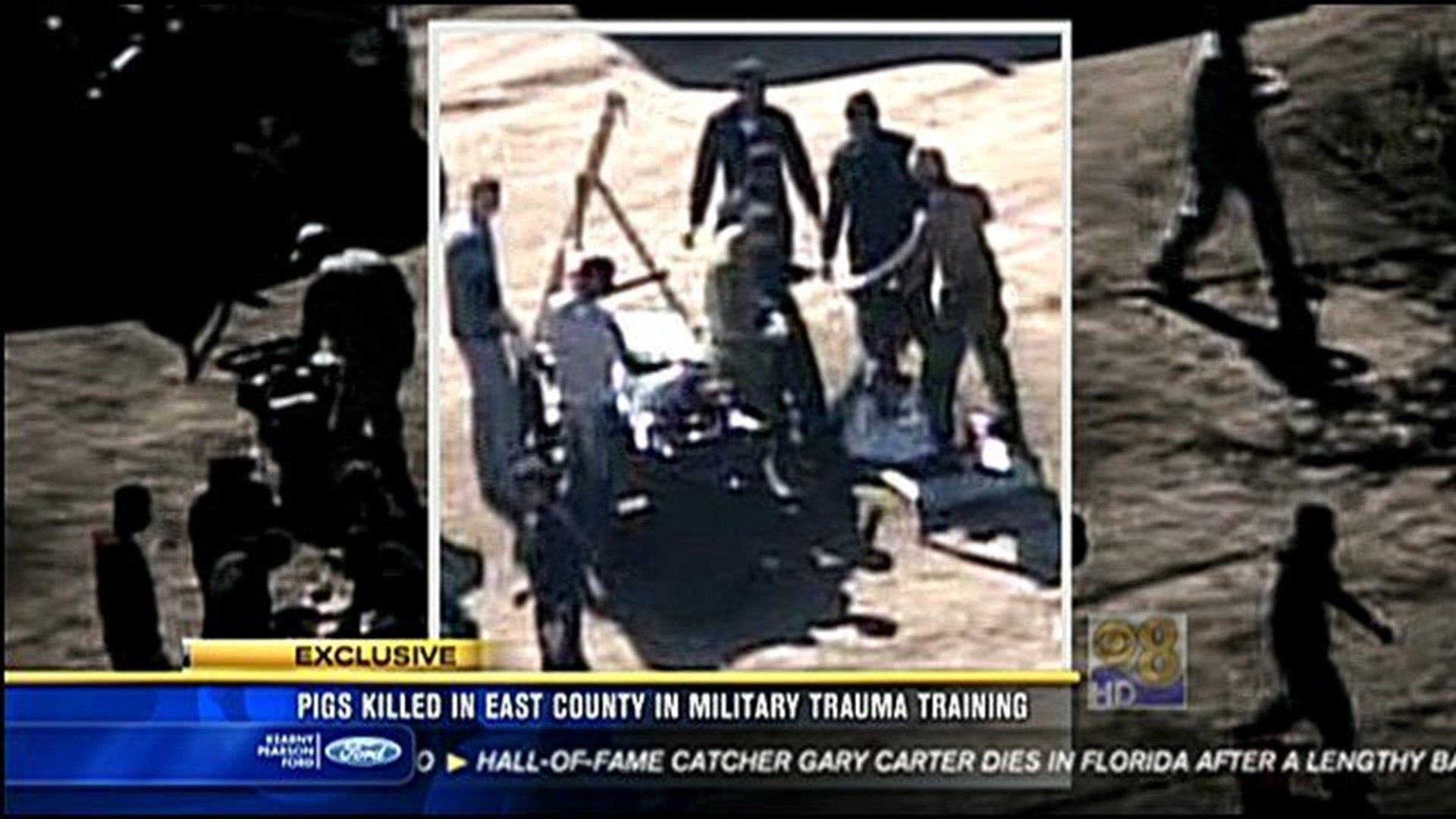 ALPINE, Calif. (CBS 8) - A controversial military training exercise, known as "live-tissue trauma training" involving the killing of animals has been captured on videotape, perhaps for the first time by any news media outlet in the United States.

A U.S. Marine Corps spokesperson at Camp Pendleton confirmed the February 8 exercises conducted in San Diego's East County involved the killing of several pigs, as part of medical training for about 40 Navy Corpsmen in advance of their deployment to Afghanistan.

KFMB News 8 flew a helicopter over the private, combat training center – known as Covert Canyon -- off High Glen Rd. southeast of Alpine after receiving a complaint from a neighbor.

The chopper video showed blood on the ground, wooden stands used to support medical IV bags, Navy Corpsmen carrying blood-soaked stretchers, and the bodies of what appeared to be dead pigs.

As the helicopter flew overhead, personnel on the ground scrambled to cover the pig bodies with garbage bags to hide them from the news camera.

The trauma training is so controversial, the Marine Corps have never allowed news crews to videotape it. In rare instances where reporters have been allowed to observe such training exercises, photography was prohibited.

During live-tissue training, the animals are first anesthetized and then shot, stabbed, burned, or wounded to mimic traumatic war injuries on the battlefield. Corpsmen then administer trauma care in the field before the animal is euthanized.

Advocates of the training believe it is essential to prepare troops on the front lines for the stress and blood of war.

"It's an opportunity for our Corpsmen, as well as a select number of Marines, to have their hands on an actual living, breathing patient," said 1st Lt. Brian Villiard of the Marine Corps Training and Education Command in Quantico, Virginia.

"It's absolutely valuable in ensuring the Marines that are wounded on the battlefield (receive) the best medical care possible," said Villiard. "Whenever this training is conducted, they have veterinarian professionals on site. The animals are anesthetized and the wounds are administered to the animals for the students to fix."

"They'll be administered a ballistic wound, a penetrating wound and a superficial wound to replicate some sort of battlefield wound as closely as possible," said Villiard.

Opponents of the trauma training believe it is inhumane and there are more modern, effective options available that don't use animals.

"There's really no reason to continue this practice," said Kathleen Conlee, Director of Animal Research Issues at the Humane Society of the United States in Washington, DC.

"Everyone, of course, is concerned about how our military receives training.  In this case, we believe these simulators and civilian trauma rooms and a combination of approaches is the best way to train our military," Conlee said.

Democratic Congressman and San Diego mayoral candidate Bob Filner has proposed legislation that would phase out military trauma training on pigs by the year 2014.

"It's just disturbing to have to watch a video like this, when not only are we using ineffective methods but the animals are clearly suffering; and apparently, the Marines are so embarrassed by it they have to cover up," said Filner after viewing News 8's helicopter video.

"Yes, I want the most effective Corpsmen we can have for our troops in Iraq and Afghanistan, but it turns out the animals don't give us that most effective training, so let's be humane and effective at the same time," said Filner. "We have technology now that can adequately simulate the human body, simulate the liquid blood, the kind of wounds that are created, and it's far more effective."

Filner also questioned why the trauma training was being done by a private contractor in the East County.

"It seems like it's being done more or less secretly, as opposed to, ‘This is the best way we train our soldiers.' I mean, you don't go out to some private (site) and try to hide from a news helicopter if you're on perfectly sound grounds," said Filner.

Camp Pendleton officials identified the private contractor hired by the Department of Defense to perform the trauma training as Assessment and Training Solutions Consulting Corp. of Virginia Beach, VA (ATSCC). The firm did not respond to repeated phone messages seeking comment.

"It's nearly always done very secretively, often on private property, with a contract corporation; and nearly always the way we find out about this is a whistle blower," said Kathy Guillermo, Vice President of Laboratory Investigations with People for the Ethical Treatment of Animals (PETA) in Virginia.

"We believe this is an illegal use of the land according to County ordinance," Guillermo said.

"What usually happens in these types of courses is (pigs) are stabbed, their legs may be cut off with giant branch trimmers, and they may be shot," said Guillermo. "The use of pigs for training medical personnel of any kind is completely unnecessary. There are simulators that are so humanlike that they have a pulse. They have a heartbeat. They actually will die."

"The thought of them killing pigs there for first aide training is disgusting," said Williams, who lives one thousand feed from the training site. "I can't believe the military can't do it at Camp Pendleton."

"This is like Blackwater-esque type training where the military -- no blame, no shame -- they don't have to be held accountable for whatever goes wrong at that training facility," Williams continued.

Camp Pendleton would not allow News 8 to interview any of the Navy Corpsmen involved in the live pig training.

"We're talking about Corpsmen saving lives; saving American lives. That's what this is about," said Halcon. "My property is zoned agricultural. So, if I wanted to go up there and slaughter 10,000 cows or chickens or pigs, it's perfectly legal. This is a venture that is perfectly legal and approved by the County of San Diego and it's part of what I do for a living."

Williams, Halcon's neighbor, said she will wait for the county to issue a ruling in response to the PETA complaints.

Halcon has a pending application with the county for a Major Use Permit associated with the Covert Canyon property.

*****
NOTE: This report has been updated from its original version.