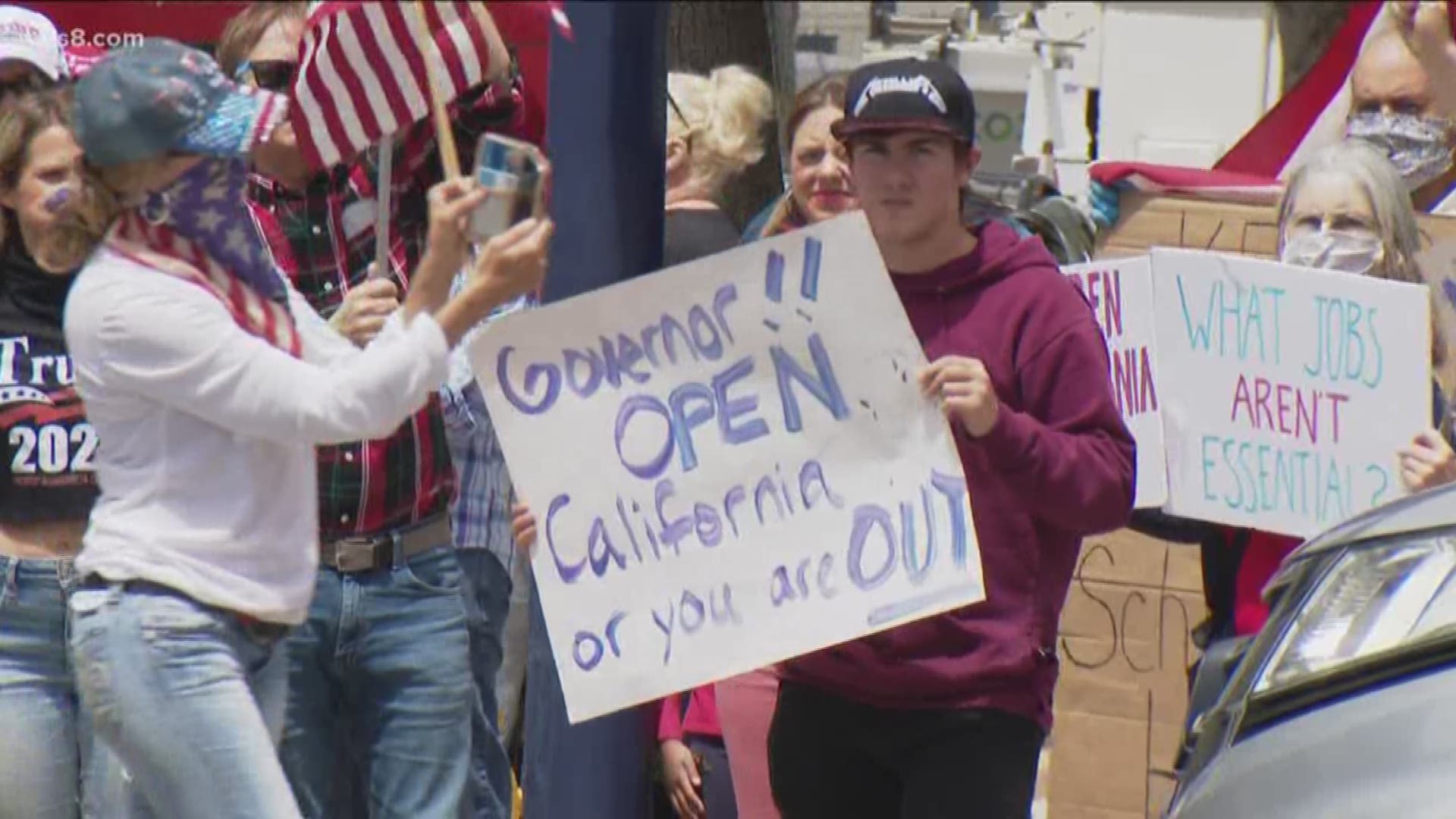 SAN DIEGO — Over the weekend, San Diegans took to the streets to express their frustrations over local and statewide stay-at-home orders issued last month due to the novel coronavirus/COVID-19 pandemic. There were two rallies: one in Downtown San Diego on Saturday and one in Encinitas on Sunday. Several community leaders are now speaking out about how the rallies played out and what they would like to see from local law enforcement.

The concern is the lack of consistency with many asking why some people have gotten $1,000 tickets when they go out to get fresh air while protestors have been allowed to do what they want without any intervention.

Francine Maxwell is president of the NAACP San Diego branch. Like many people who watched protests over the weekend downtown and in Encinitas, she was concerned that those at the rally were not social distancing and many were not wearing masks.

Maxwell also noticed that the police were there monitoring the gathering but not enforcing any rules including social distancing.

She said she was out walking last week with her father - who has Alzheimer's disease - and within minutes of getting out of their car, an officer approached them and told them they couldn't walk on a trail.

Civil rights activist Reverend Shane Harris also responded strongly to the weekend rallies on Monday with a call for San Diego Police Chief David Nisleit to issue citations for the organizers of the protests, “which violated stay-at-home orders because of COVID-19,” according to the People’s Alliance for Justice.

“We believe that things would not look the same if it were mostly people of color gathering,” a statement by the organization read in part.

Harris spoke outside the organization’s headquarters Monday saying his call is not political but about race and fairness. Harris said he is concerned the protest gatherings could cause wider spread of COVID-19.

"This is racial entitlement at its finest," Harris said. "There were several hundred gathered in San Diego County. Most, if not the majority, were white Americans."

Harris said that if "people of color" had attempted such a protest, the police presence would have been much higher.

"You could have stood six feet apart," said Harris. If you were going to go out and do a protest against the stay at home orders, maybe you should have been wearing a mask and gave masks to everyone who attended the protest.”

The issue should be no different than “religious freedoms,” according to Harris who noted that churches are not allowed to gather under the stay-at-home orders.

SDPD, who was in charge of the downtown rally, said they made sure that group didn't block intersections but didn't want to issue tickets and rile up the crowd in an effort to keep things as peaceful as possible.

"We have decided not to enforce the law at this time," according to a police statement released that day. "We welcome people to voice their frustrations and concerns in a peaceful way. We hope after they've done so, they'll disperse."

On Monday, the San Diego Sheriff's Department and San Diego Police Department released the joint statement below on the protests saying prosecution could still be sought by those who violated the order, "especially to the organizers of these events."

"Just two short weeks ago, the NAACP San Diego Branch published an article urging residents to obey the public health orders, but also urging law enforcement to use common sense when enforcing these orders, so as not to endanger lives unnecessarily.

On Saturday, April 18th, a 'Freedom Rally' was held in downtown San Diego, where according to press accounts some 200 people, 'many … wearing Trump 2020 hats' and 'most not wearing masks or practicing social distancing' gathered to protest the measures that are keeping our sick and elderly from dying.  As much as we deplored the foolishness of these protestors, we might have appreciated the good sense of the San Diego Police Department. We might have assumed none of these protestors were cited or arrested because the SDPD recognized that aggressive enforcement of the COVID-19 measures would necessitate the very sort of close contact that could make matters worse, not better.

We might have thought that. Sadly, we are left to wonder; did the SDPD forbear out of good sense, or out of sympathy with the protestors?  Was it the protestor’s allegiance to the science-phobic, authoritarian, low-IQ individual occupying the White House that made the SDPD keep their distance?  Or perhaps was it the officers’ gut feeling that white folks don’t need to be arrested?

Why would we say such a thing? Why would we doubt the good sense of the San Diego Police Department?

Just two days before, I myself went to Christopher Wilson Memorial Park, adjacent to the Southeastern Police Station.  Now, I understand that the parks are closed, and that mass gatherings are not to occur. I noted the tape around the playground equipment and seating areas.  And yet...

My father, a retired Navy Master Chief, is elderly and is at very high risk for COVID-19.  He also has dementia, and it is impossible to explain to him why he needs to stay inside. We usually walk in the neighborhood, but we have been having trouble getting others to maintain social distancing, and I chose to go to the park to keep my father safe.  He was wearing his mask, and we were practicing social distancing from everyone not living in our home. We hoped to do three quick laps around the deserted park and get home.

Imagine our surprise when a dark, unmarked van jumped the curb and proceeded to drive straight at my father, who was walking ten feet ahead of me, and stopped just five feet away from him.  The driver, accompanied by another officer, ordered my father to come to him.

Of course, we all know how this story may have ended.  Law enforcement in San Diego has a poor track record in dealing with men of color who may not fully understand or immediately comply with instructions (and often with those who do both.)  Thankfully, I was there to explain the situation, and we avoided arrest or worse.

I am left, however, wondering just what it was that made those officers feel that jumping a curb and driving up on a lone pedestrian was a sensible way to enforce a public health measure.  COVID-19 aside, possible mistaken use of deadly force aside, there is the fact that a two-ton vehicle was driven close to a frail pedestrian.

Was their need to enforce their will on a black man really that strong?  There was no need to charge their vans into the 'Freedom Rally' two days later, so we have to wonder.

This is the very sort of unthinking law enforcement overreach we warned about weeks ago, with a side order of racial bias.

For shame, Chief Nisleit.  Train your people better than this!"