The adjusted case rate change from 7.1 to 7.0 means that the county will not be in jeopardy of moving to the more-restrictive purple tier on Oct 27. 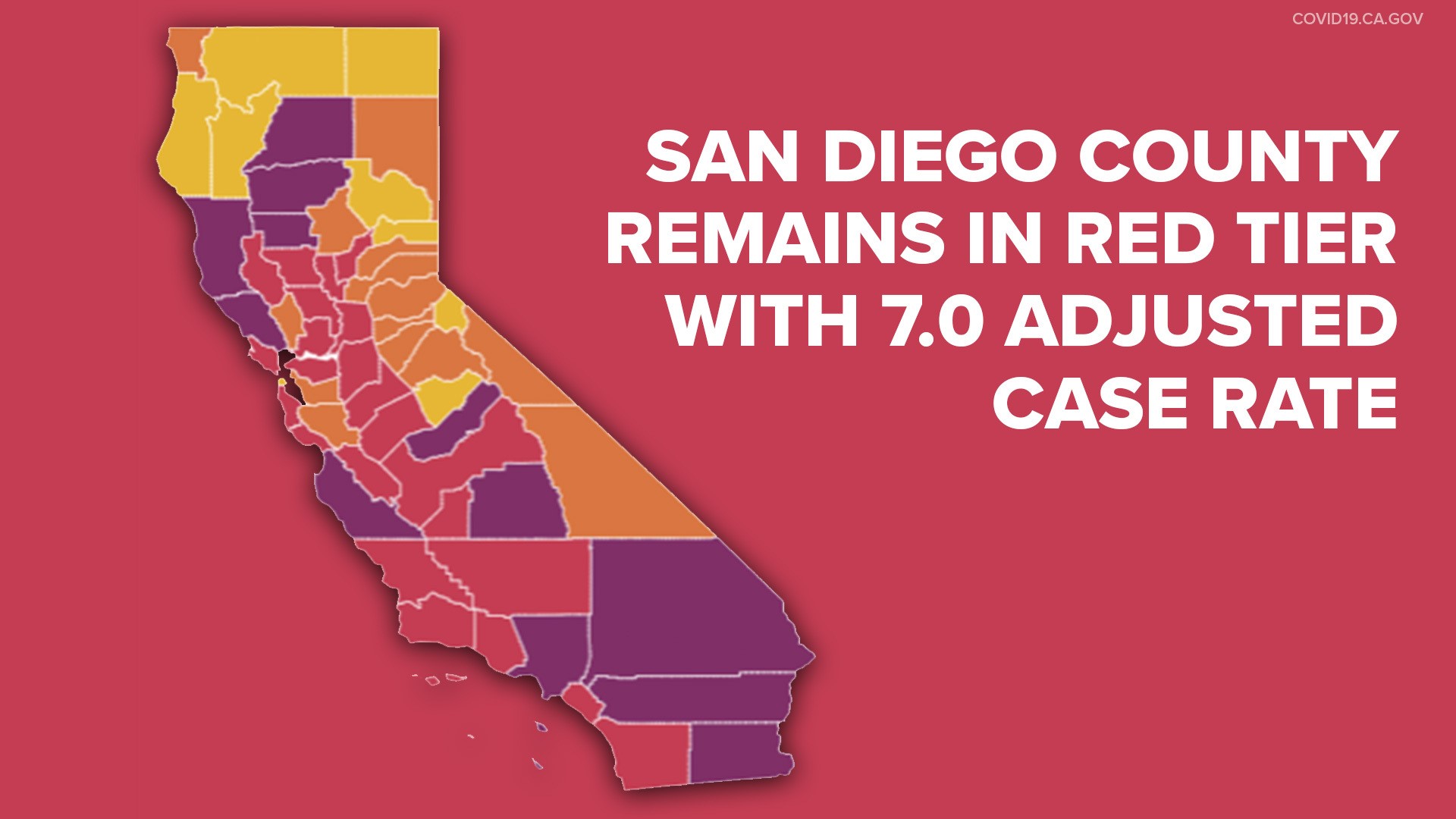 SAN DIEGO COUNTY, Calif. — San Diego County will remain in the red tier this week despite a rise in coronavirus cases. The state erroneously listed the county with a rate of 7.1 Tuesday morning, Oct. 20. However, the county’s rate was actually a 7.0, which is the upper limits of the red tier.

Last week, health and county officials feared the county’s rate would be above 7.0, which would have started a countdown toward potentially entering the most restrictive tier, purple. A county that has a case rate of 7.0 for two consecutive weeks is placed into the higher tier.

County officials said the error occurred because the state did not update its website after the county prevailed in an adjudication process between when the adjusted rate was initially calculated over the weekend and when it was published Tuesday.

Under the state’s Blueprint for a Safer Economy formula, counties can receive a “credit,” which lowers their case rate if they do more testing than the state median. The state believed the adjusted rate should be 7.1, but county officials argued there was a discrepancy in the number of cases used to calculate the rate. The state agreed, which lowered the rate to 7.0, but it posted the higher rate to its county map. The error was fixed Tuesday afternoon following an inquiry from News 8.

Even though the rate does not mean some businesses have to worry this week about suspending indoor operations, it only buys the county another week. If the adjusted rate is above 7.0 when it is next calculated on Oct. 27, then San Diego County will be at risk of returning to purple on Nov. 3.

“Each week we walk in and wonder which side of the threshold [San Diego is] going to be on. My hope is that as they identify outbreaks, that they're continuing to do a tremendous amount of testing, building up their resources around contact tracing and supportive isolation,” said Mark Ghaly, M.D., M.P.H., Secretary of California Health and Human Services.

Watch the full state update from Oct 20 below:

No new community outbreaks were reported Monday in San Diego but over the past seven days, the county has confirmed 31 community outbreaks, well above the county’s limit of seven or more within a week. An outbreak is defined as three or more cases in a setting over a 14-day period among people who are from different households.

San Diego County Public Health Officer Wilma Wooten, M.D., M.P.H., said 95% of the county’s cases were not related to an outbreak, which indicates the virus is “widespread” throughout the county.

Hospitals and intensive care units have coped with the rising number of cases and have the capacity to handle a projected 46% increase in patients over the next four weeks.

Some health officers have argued their county case rate should receive an adjustment for maintaining low hospitalization and ICU admissions. The state tracks hospital preparedness and available ventilators but continues to deny these requests.

“They are absolutely numbers we track. However, we believe in order to forecast where a county is and where they should be in a tiering system, that looking at hospitalizations is too far of a lagging indicator,” said Ghaly. "If the case numbers themselves are going up, we can predict in 3-4 weeks we’re going to see hospital increases as well. Using case numbers and test positivities gives us a much clearer view into what the hospital situation is going to be down the road.”

If San Diego County entered the purple tier, it would not encounter as many restrictions as other counties had last month. On Tuesday, the state allowed personal care services, such as massage parlors, nail salons and tattoo shops, to reopen for indoor operations in all tiers.

The county’s main goal is to further loosen restrictions by lowering its case rate into the orange tier and beyond. To do so, it must have an adjusted case rate of less than 4.0 for 14 consecutive days. It needs an adjusted rate of less than 1.0 to move into yellow. San Diego has not had a rate lower than 5.8 since the state began using its new case rate formula in August.

“We don’t have the crystal ball. I don’t know when Orange County or San Diego County will enter yellow, but there’s lots of work we can do together, both state, local, business, community leaders, individuals, to do what we can to make sure we reduce transmission throughout our county,” said Ghaly. “There is a path forward. We don’t know when, but we do know how and I think we’ll continue to put in the hard work to get us there one county at a time.”

Why does it matter whether San Diego had an adjusted case rate of 7.1 or 7.0?

7.0 is the upper limit of the red tier. If San Diego had a 7.1 adjusted case rate this week and had a rate above 7.0 next week then we would qualify to move into Tier 1.

What happens next week?

The state evaluates each county's case rate every Tuesday. If it’s above 7.0 then it could put us on the road toward the purple tier again. Counties with a rate above their current tier for two consecutive weeks qualify to be moved into the higher tier. If it’s below 7.0 then we remain in red.

What is our unadjusted rate?

Our unadjusted rate this week was 7.8.

How is our unadjusted rate calculated?

The rate is the average number of new cases over a 7-day period per 100,000 residents based on episode date with a 7-day lag, excluding inmates.

Why is our case rate adjusted?

Rates are also adjusted for counties that meet the state’s equity metric. This is intended to ensure action is taken in communities that are more vulnerable to the virus. Counties can only have their rate adjusted down for meeting the metric. They cannot be penalized.

What happens when a county disagrees with its rate?

The state has an adjudication process. San Diego has utilized this several times since the Blueprint for a Safer Economy began. Early on, county leaders realized it was not including data from state testing sites and adjudicated the results. This week, the county disputed the number of cases used to calculate the rate.