Moreno was admitted to the hospital July 13 with COVID-19. 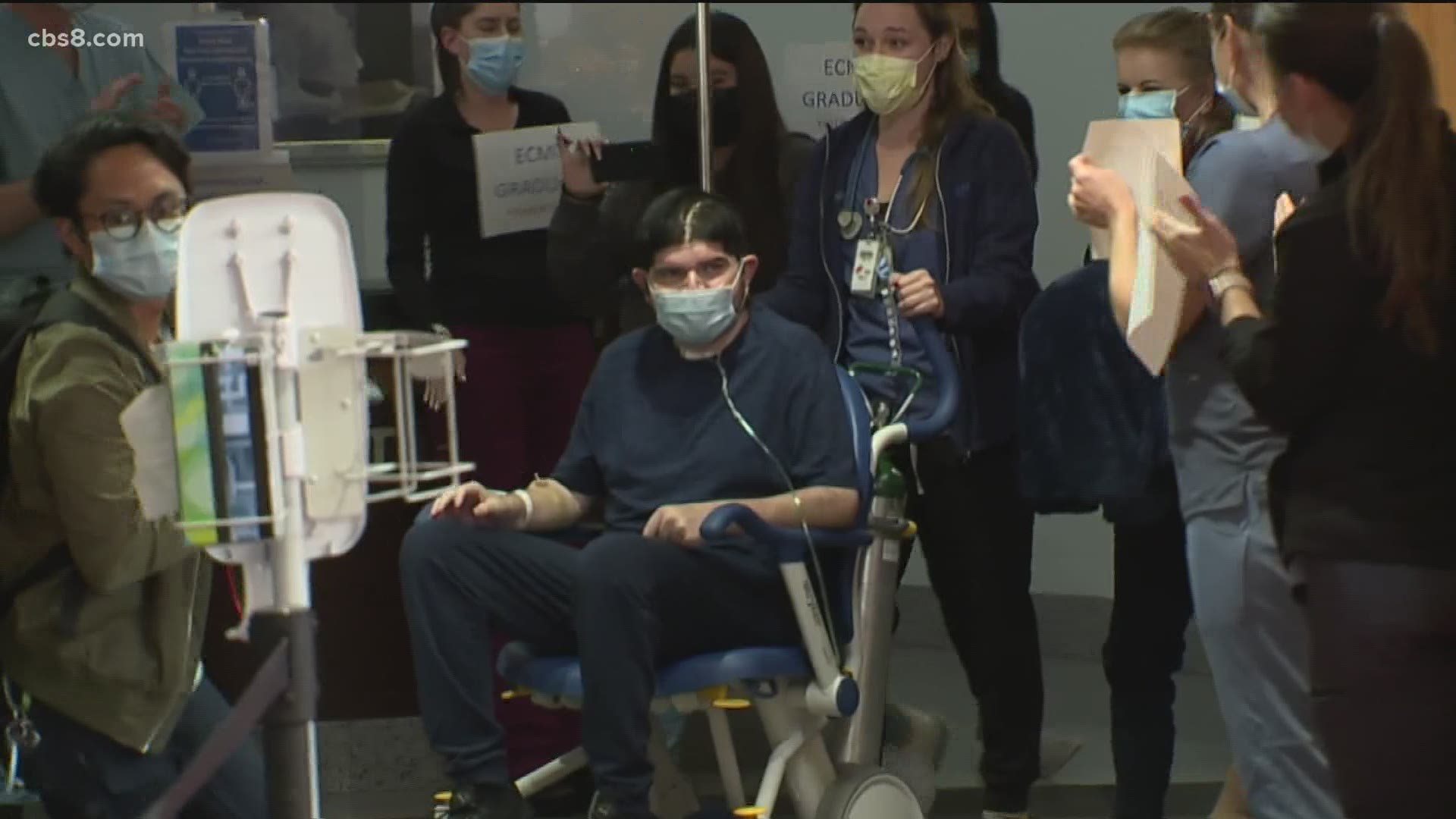 SAN DIEGO — On the move finally, 32-year-old Eduardo Moreno is leaving Scripps Memorial Hospital La Jolla, but not without a goodbye party put on by Tuesday the nurses and staff. Many held up signs that read “Good Luck” and “Congrats.”

Moreno was admitted to the hospital July 13 with COVID-19. At first, doctors didn't think was going to make it.

"He had these moments of near loss and the requirements for surgeries,” said Dr. Scott McCaul, medical director of Scripps ICU and ECMO at Scripps Memorial Hospital La Jolla.

McCaul said Moreno had advanced respiratory failure from COVID, pneumonia and destructive changes in his lungs. Doctors put him on the ECMO, or extracorporeal membrane oxygenation machine, for life support.

“Taking your blood and going through a machine, so it is to take over his lung function, and when that happens, he needs to learn how to breathe underwater and how to use a machine for what the lungs do but without being able to feel breathing,” said Dr. McCaul, who has been a Scripps ICU physician since 1987.

Moreno was on life support for half a year and in the hospital for eight straight months.

"Being a mom, I was just crying at home. I’m just saying, 'I want him home,' and Dr. McCaul said, 'don't worry he is going to make it home.' I thank God,” said Moreno’s mother, Cecelia Amador.

Moreno lives in Norwalk in Los Angeles County, but was visiting his parents and his 11-year-old daughter in Ensenada, Baja California when he got sick with COVID and was sent to San Diego for treatment as hospitals in Mexico were overflowing.

Moreno had head several surgeries, including on his brain.

"He went through any number of challenges to get to that level of independence to deal with the anxiety, and the pain to fight through and because of that he is a model for all of us,” Dr. McCaul said.

Turning a corner in January 2021, Moreno spent two months in physical therapy -- three times a day - and now, he can now walk and talk.

"Even though they told me that he wasn't going to be all the way there because of the surgeries, he remembers everything. He's 100%,” Amador said with tears in her eyes.

Congrats to Eduardo Moreno of Norwalk, who went into @ScrippsHealth in July with #Covid19 and severe lung damage and after multiple surgeries, he was finally released today from the hospital and reunited with his family!✨ @CBS8 @NewsManLou @DeskEight pic.twitter.com/lDlQuMQV9y

Although Moreno may not look like he is recovered while in a wheelchair with a blanket and oxygen tubes in his nose, he says he is feeling much better.

In fact, on Tuesday, Moreno was just out of breath and tired from finally saying goodbye to all the staff who nursed him back to life for eight months.

If you would like to help Eduardo and his family pay for his mounting medical bills, he has a GoFundMe set up.