Dec. 1 marks the deadline the city of San Diego set for all city employees - including police officers and firefighters - to be fully vaccinated. 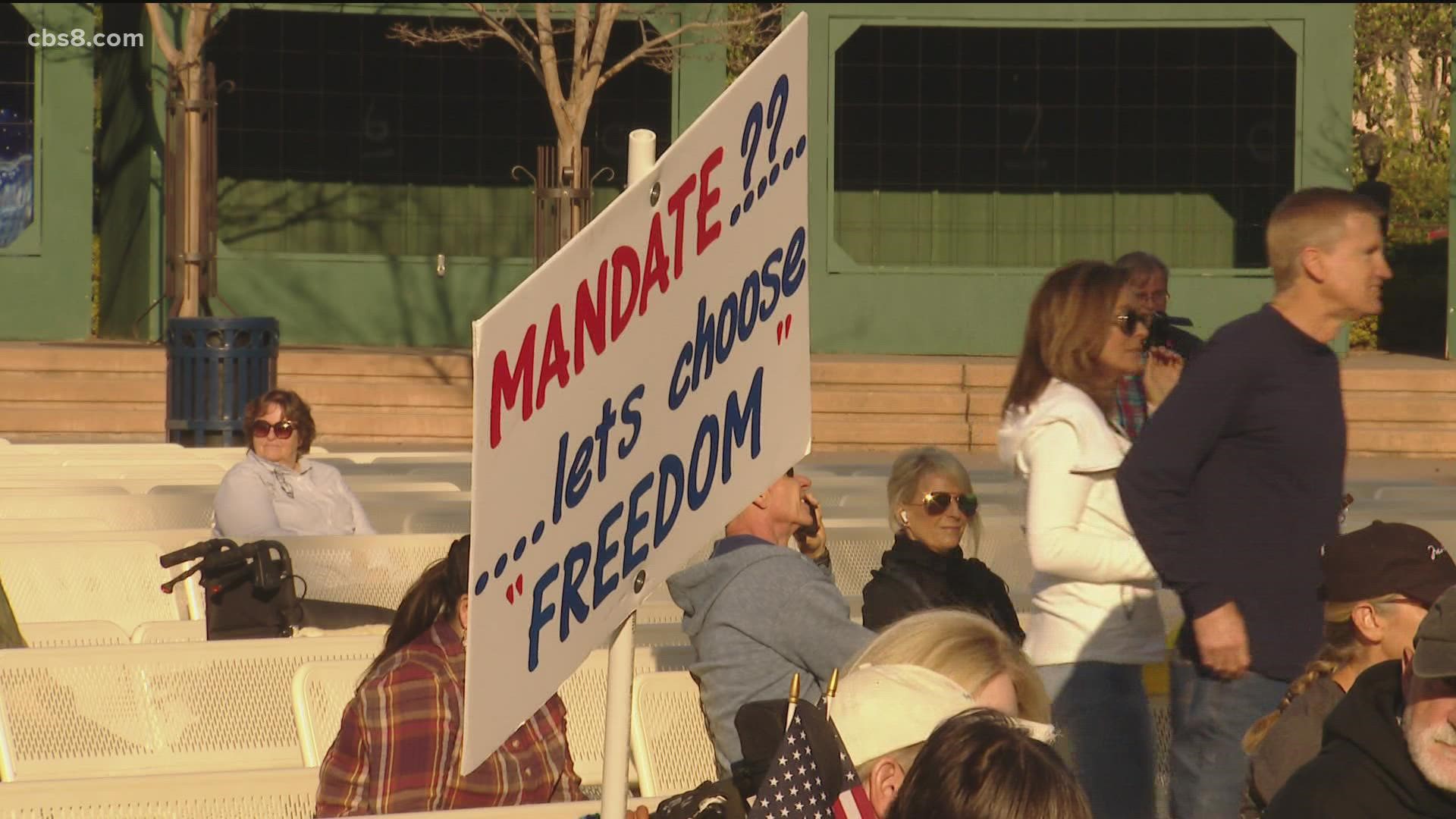 SAN DIEGO — Hundreds of demonstrators, including San Diego first responders and their supporters, rallied in Balboa Park Friday in defiance of the upcoming vaccine order for all San Diego city employees.

Dec. 1 marks the deadline the city of San Diego set for all city employees to be vaccinated. Any employee who does not get vaccinated and is not provided with an exemption will face termination of employment, according to the city.

While the mayor said it is critical for all city workers to be vaccinated to protect themselves and the public, demonstrators countered that this mandate will lead to hundreds of first responders leaving their posts, and that public safety in San Diego will suffer as a result.

"We are here to protect our protectors," said Amy Reichert, one of the rally's organizers and executive director of Re-open San Diego.

Many protestors said they were not necessarily 'anti-vaccine,' but are instead opposed to not being able to choose whether or not to be vaccinated against COVID in order to keep their jobs.

"The primary goal of these mandates was never about health," said Sgt. Mat Randolph of the San Diego Police Dept. "But rather, control and the stripping away of our constitutional rights."

Demonstrators said that hundreds of first responders here in San Diego will be forced to leave their positions, leaving agencies like the police and fire departments dangerously short-staffed. This will impact public safety, they added, including potentially increased response times to emergency calls.

"This is going to create total chaos," said one participant.

"Not only are we losing officers, we are losing their experience, we are losing those relationships we have built in our communities," said Katie Amarillas, head of the Balboa Park Safety & Security Committee. "This is critical to understand."

Currently, nearly 20% of all city employees are not fully vaccinated, according to updated number released Friday by the Mayor's Office.

This includes 730 members of the San Diego Police Officers Association, which makes up almost 37% of the overall force; and 152 members of the firefighters' union, or about 16% of the total membership - also not fully vaccinated at this point.

Hoskins suggested an alternative such as mandatory COVID testing on a regular basis.

Mayor Gloria, however,  made it clear Friday that the Dec.1 deadline for employees to be fully vaccinated still stands.

“The way out of this pandemic is through vaccines – and the City of San Diego will lead by example,” said Mayor Todd Gloria. “With City employees regularly interacting with members of the public, this vaccination mandate takes on even more necessity – not only to protect the public but also to protect our city workers.”

According to the mayor's office, applications for vaccine exemptions on medical or religious grounds will be considered on a case-by-case basis.

In a press release Friday, the city said that nearly 1,300 of its employees have been infected with COVID-19 leading to staffing challenges due to illness and exposure to those infected. It was also noted that as a result of rising positive COVID cases, the San Diego Police Department has had to suspend its police academy operations on two occasions and the San Diego Fire-Rescue Department has had to temporarily close two fire academies saying at one point more than 30 SDFRD personnel were in isolation at one time due to positive COVID-19 tests.

ReOpen San Diego which organized the event said spouses of first responders were displaying work boots at the event at Balboa Park's Organ Pavillion to show "that they are holding the line.''