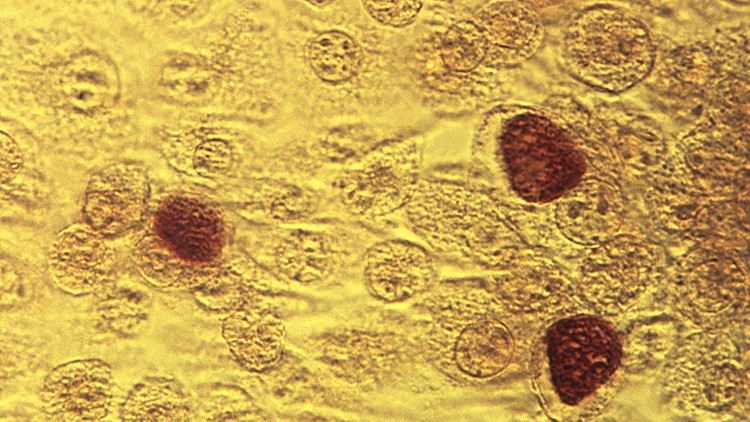 Photo by: AP
FILE - This 1975 file microscope image made available by the the Centers for Disease Control and Prevention shows chlamydia trachomatis bacteria magnified 200 times. The number of cases of STDs - chlamydia, gonorrhea and syphilis - in California reached a record high in 2017, and officials are particularly concerned by a spike in stillbirths due to congenital syphilis, state health authorities said Monday, May 14, 2018. (Dr. E. Arum, Dr. N. Jacobs/CDC via AP, File)

LOS ANGELES (AP) — The number of cases of three major sexually transmitted diseases in California reached a 30-year high in 2018, according to a state report released Tuesday.

More than 336,000 cases of chlamydia, gonorrhea and syphilis were reported last year, as rates of all three STDs continued to increase across the state, the California Department of Public Health reported.

RELATED: Lots of Americans are wrong about how STDs are spread, survey finds

Officials said they are particularly concerned by the number of congenital syphilis cases, which were 14% higher than the previous year and nearly 900% higher than in 2012.

There were 22 stillbirths or neonatal deaths because of syphilis last year, the report said.

If left untreated, syphilis can result in blindness, hearing loss and neurological problems. Chlamydia and gonorrhea can lead to infertility, ectopic pregnancy and chronic pelvic pain.

Many STDs can be cured with antibiotics.

The highest rates of STDs are among young people ages 15 to 24, officials said.

"Regular testing and treatment are essential prevention strategies, even for people who have no symptoms," Dean said in a statement. "Most people infected with an STD do not know it."