A jury deadlocked Monday in the retrial of a Navy commander, becoming the second panel to fail to reach a consensus on whether he sexually assaulted a junior officer in her home after a night of drin 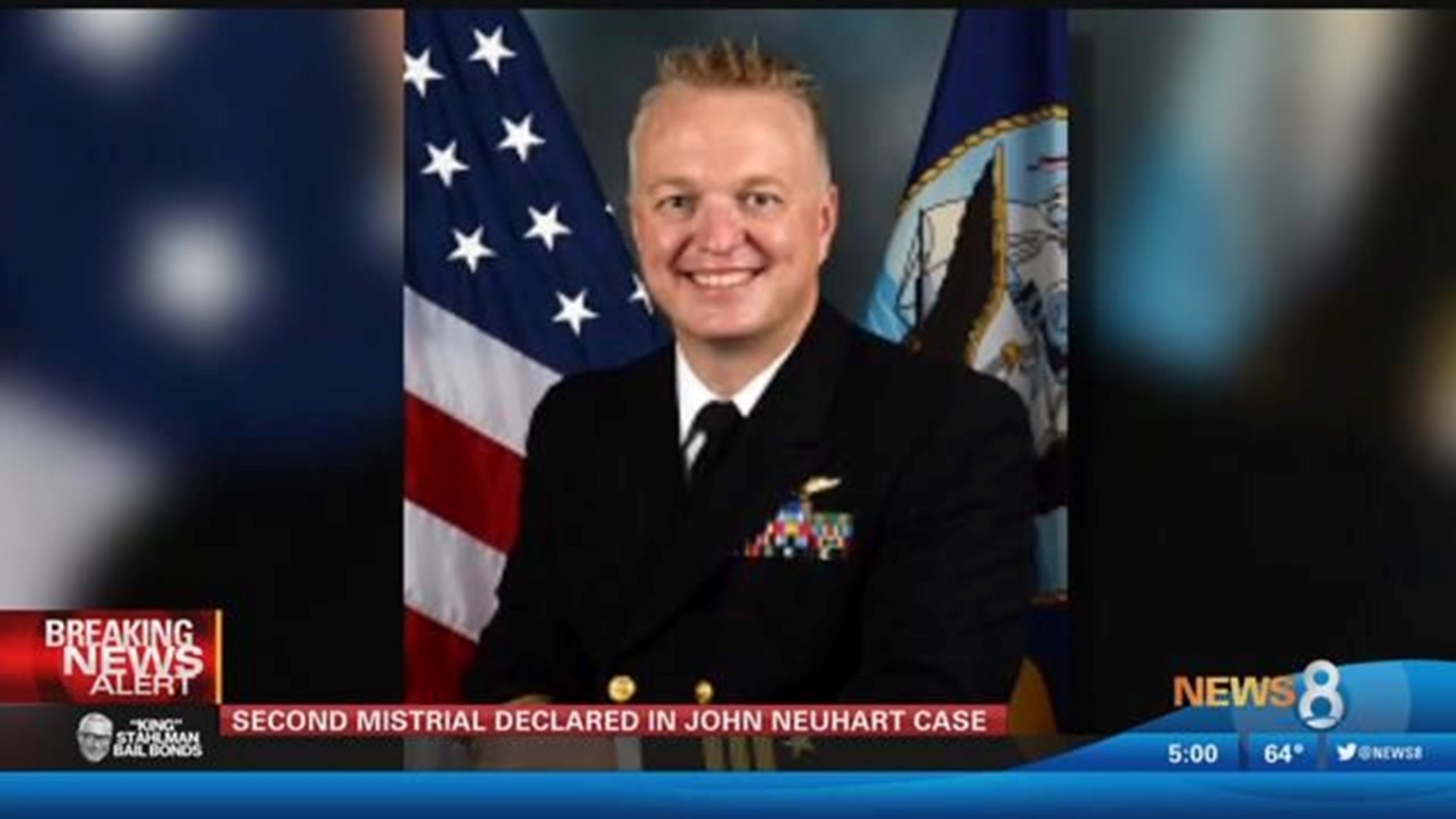 SAN DIEGO (CNS) - A jury deadlocked Monday in the retrial of a Navy commander, becoming the second panel to fail to reach a consensus on whether he sexually assaulted a junior officer in her home after a night of drinking at a San Diego hotel.

A status conference was set for April 23 to determine how to proceed.

A different jury in December deadlocked 11-1 in favor of convicting Neuhart, 41, of assault and attempted forcible rape.

Deputy District Attorney Jennifer Tag told jurors in the retrial that Neuhart, who was the alleged victim's helicopter squadron commander in Guam before she was transferred to San Diego, was physically aggressive with the woman once they arrived at her Valencia Park home and pulled off her jeans.

The prosecutor said the woman identified in court as Kristin B. has no memory of the limousine ride home from the downtown hotel to her home, but remembers pushing the defendant out the door after the alleged assault on Sept. 12, 2016.

Neuhart came around to a back door and decided to videotape the encounter with his cell phone, Tag told the jury.

"I've wanted you for awhile," the defendant tells Kristin through the closed door.

"Is that your safe word?" the defendant says.

Once she opens the door, Neuhart tells her to get a condom.

When called as one of the first witnesses at the retrial, Kristin testified that Spike was Neuhart's call sign and stands for "Sweaty palms, I know everything."

A neighbor heard the woman's screams and called 911, then confronted Neuhart, forcing him to gather up his clothes and run away, Tag told the jury, adding that Neuhart ran so hard through two canyons that he broke his leg before officers caught up to him and took him into custody.

During the ordeal, Kristin told the defendant "No," "Stop" "Get Out" or "Get Off" at least 90 times in less than 15 minutes, the prosecutor said.

Defense attorney Kerry Armstrong told jurors that Neuhart, a married Iraq War veteran and father of six, and his client had a mutual attraction to each other. He said things might have been misconstrued that night, and both of them were drunk.

Neuhart thought Kristin, a helicopter pilot and a lieutenant, had been flirting with him while they were in Guam, Armstrong said.

The attorney showed jurors hotel surveillance video in which the two are seen hugging and kissing at the bar and in an elevator the night of the incident in San Diego. At the end of the evening, he said, they debated where to go and decided to get a ride to her house.

The limousine driver thought Kristin was flirting with the defendant, the defense attorney said.

Neuhart asked her in the limo, "Does no mean no tonight?" and she said no, according to Armstrong. Once at her home, Neuhart was confused because she was giving him mixed signals, his attorney said.

Neuhart decided to record the event because it was getting "so weird" and he wanted to protect himself, according to Armstrong.

"This is probably the weirdest case you'll ever sit on," Armstrong told the jury.

The defendant was relieved as commander of Helicopter Sea Combat Squadron 25 based at Anderson Air Force on Guam after his arrest.

Neuhart -- who is still in the Navy-- did not testify in the retrial after multiple days on the witness stand in his first trial.