When you go out to dinner you expect to pay the price that is listed on the menu. 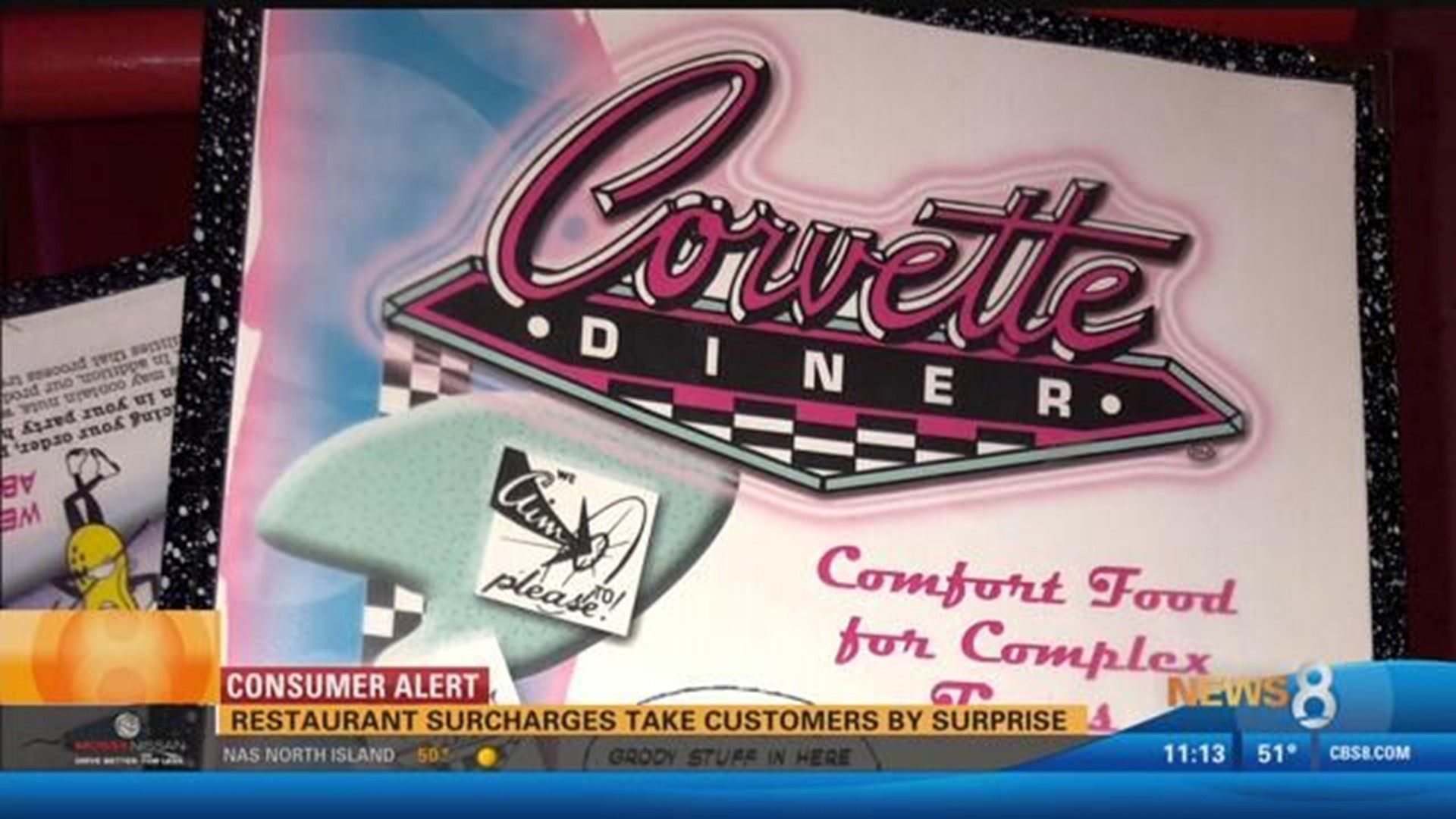 SAN DIEGO (NEWS 8) - When you go out to dinner you expect to pay the price that is listed on the menu.

But more and more local restaurants are adding surcharges – a three or four percent fee – which you might not notice until you get the bill.

At Sammy's Woodfired Pizza and Grill in Scripps Ranch the notice is posted right in the front window. A 4 percent surcharge is added to all guest checks.

The notice also is printed at the bottom of the menu. But sometimes that 4 percent surcharge takes customers by surprise.

“I only noticed it when I got the bill. There was like a $3.36 charge or something,” said one Scripps Ranch patron.

Other customers have heard about the surcharges.

Restaurants started imposing the fees about a year ago right after mandatory increases in the minimum wage kicked in.

“If they didn't know it was coming they're not really paying attention to what going on in this town are they?” one Scripps Ranch customer asked.

About 40 local restaurants currently impose a surcharge and one question always seems to come up: Why not increase the menu prices instead?

“Raise your price. Then I don't know you're screwing me,” said one male patron.

“I've talked to a great many consumers about this issue. Nobody has ever said they don't want the price to go up. They just want to be told the truth up front,” Hyde said.

“It's deceptive and it's misleading. They don't really tell you what you're paying for the food,” the attorney said.

Restaurants named in the lawsuits include Karl Strauss Brewing Company, Georges by the Cove in La Jolla, Rockin' Baja Lobster downtown and more than a dozen restaurants owned by the Cohn Restaurant Group including the Prado restaurant in Balboa Park, the Strip Club steak house in the Gaslamp Quarter and Corvette Diner at Liberty Station.

“We have offered to release them from the lawsuits if they will just stop doing what they're doing and they refuse to do that,” said Hyde. “Why don't you just stop? If you stop, we'll stop suing you.”

News 8 contacted four different attorneys representing restaurants named in the lawsuits. All of them declined to comment.

The Food and Beverage Association of San Diego told us it's all about economics.

“In the last eight years, we have experienced a 60 percent increase in minimum wage,” said Stephen Zolezzi, the association’s CEO.

He said keeping a surcharge separate from the prices on the menu allows the restaurant industry to send a message.

“Yes, it's a political statement. We're trying to show people the consequences of legislation that adds to the cost of doing business,” Zolezzi said.

As for the lawsuits and the attorneys behind them?

“They're using loopholes, gray areas in the law, to shake down businesses to try and get cash settlements out of them and make money,” said Zolezzi.

Some restaurants already have decided to drop the surcharges, either in response to customer complaints or pending legal action.

The City sent out warning letters to 11 businesses demanding that surcharges be disclosed in a “clear and conspicuous” manner.

News 8 emailed the City Attorney to inquire about the status of those warning letters.

“After receiving warning letters, 10 of the 11 businesses came into compliance. We are in litigation with only one business that did not comply, the Barefoot Bar & Grill,” wrote Michael Giorgino, the City’s Chief of Criminal Prosecution Operations.

The California Restaurant Association in Sacramento also declined to be interviewed on camera for this report. A spokesperson emailed News 8 the following written statement:

Surcharges and other fees are legal pricing tools used by utilities, transportation companies, hotels, government agencies, internet companies and restaurants to help cover increased costs. Restaurant surcharges have been used for years in California’s major metro areas to cover escalated operating expenses while continuing to employ and increase wages and other benefits for employees.