Non-citizens on government boards, impacts to vote by mail ballots, and potential polling places at college campuses are some of the new laws coming into effect. 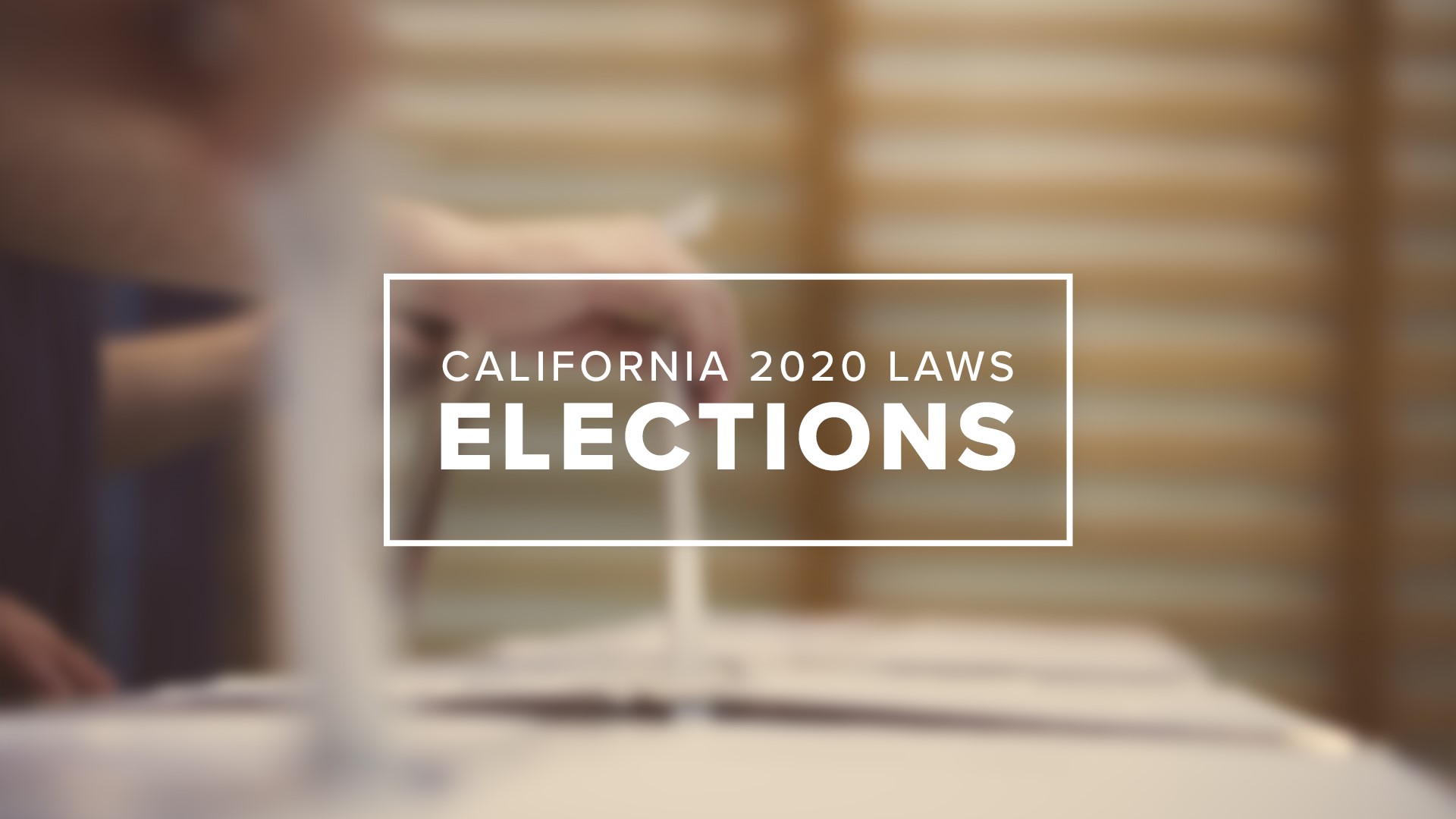 CALIFORNIA, USA — Another new year means another batch of new laws for California. With the 2020 primary and general election on the horizon, the new election laws might be more noticeable than usual.

Some of the big election laws coming out of 2019 were fairly non-controversial, like the law that creates a deadline for officials to mail out ballots. Others, like a bill that allows non-citizens to serve on government boards, were more divisive.

Here's what to expect heading into 2020.

Non-citizens can serve on government boards

There are two things to take note of with the current law. The first is that a citizen of California is defined as a person born and living in the state or born outside of the state but in the U.S. and living in California.

The bill changes the law so that anyone living in California, regardless of immigration or citizenship status, can serve in appointed civil offices.

If you’re 18 years old and a citizen of California, then you’re eligible to hold an appointed office. However, the change in the law is only applicable to appointed boards and commissions, not elective civil offices.

In a signing statement, Newsom said the bill strengthened representation by letting more Californians be considered for public service on boards and commissions based “on the merits of their application, and not their current immigration status.” The governor added that the law doesn’t provide a right to be appointed and doesn’t allow the state to circumvent federal employment laws.

Standardizing candidate names on the ballot

Currently, the law requires ballots to be translated into other languages under certain circumstances.

The new law means those jurisdictions will have to give a phonetic translation of a name unless a candidate proves with a birth certificate or other means that they have been known by a certain name in the community for at least two years.

Generally speaking, the phonetic translation refers to having a translation that shows you how a name is pronounced.

Some jurisdictions might not be able to comply with the bill due to the limitations of their voting system, but the law makes it so that any new voting system they buy after 2020 has to accommodate the bill's requirements.

The current law lets candidates submit translations of their names into a character-based language with no oversight, and, according to Low's office, those submitted names are not always the right translation of their name or a name they’re known by. Since each county also has a different way of processing translations, the name might also appear differently in different jurisdictions.

The bill aims to provide more clarity to keep candidates from selecting or being assigned translated names that don't match their identity.

Currently, any registered voter can get a vote by mail (VBM) ballot and their employers have to allow them to take up to two hours off of work to vote.

The new law prohibits employers from requiring or requesting an employee to bring their VBM ballot to work to vote at work. It also adds a fine of up to $10,000 per election for violators.

The current law doesn't prohibit employers from requesting or requiring their employees to bring their VBM ballot to work or to vote at work. The bill aims to address voter suppression and to protect ballot integrity.

County elections officials will be required to mail out the VBM ballots no later than 29 days before an election and require mailing to finish within five days. Officials also won’t be allowed to discriminate against any region or precinct in the county by choosing which ballots to mail first within the 5-day period.

The current law doesn’t explicitly specify a date that officials are required to start mailing VBM ballots. According to Assembly analysis, the implication has been that officials can’t send out ballots until the 29th day before the day of the election. The bill hopes that by sending ballots out earlier and setting deadlines to mail them will give voters more time with their ballots and allow them to more time research it.

With AB 2540, governing bodies with school buildings or other public buildings in their jurisdiction have to allow those buildings to be used as voting centers beginning up to 10 days before election day if election officials ask for it.

The new law requires an election official to consider placing a voting center on a public or private university or college campus. It also expands the definition of "public building" in the existing law to include a building owned or controlled by community college districts, the California State University, and the University of California. However, with the UC, they are only encouraged to do so and not required to comply with the request.

With the prior law, it wasn't clear whether the law applied to CSUs or California Community College buildings.