As of 6 a.m. Wednesday morning, flight personnel had conducted more than 1,500 helicopter water drops on the ship, Navy officials said. 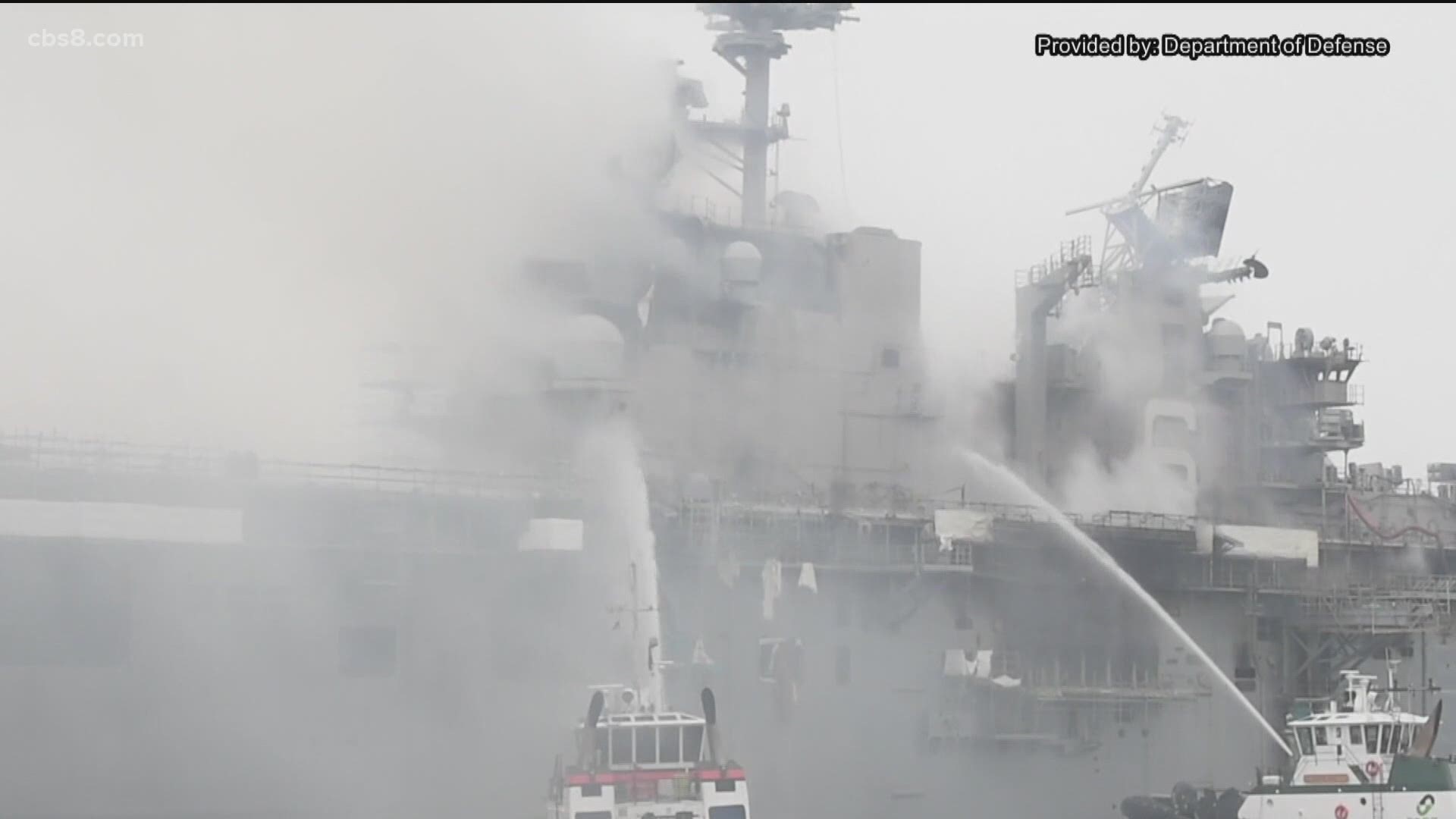 SAN DIEGO — Teams of military and civilian firefighters labored for a fourth day today to subdue a stubborn blaze that has raged aboard the USS Bonhomme Richard at Naval Base San Diego since last weekend.

Though the fire -- so widespread and hot that, for a time, was too dangerous to battle from aboard the warship -- has caused extensive destruction to the 41-ton vessel, the damage apparently is not irreparable, according to the Navy.

As of this morning, flight personnel had conducted more than 1,500 helicopter water drops on the ship, a process that was "cooling the superstructure and flight deck, enabling fire crews to get onboard internally to fight the fire," Navy officials said.

The all-out firefighting operation was ongoing late this afternoon.

The blaze broke out shortly before 9 a.m. Sunday in a part of the vessel where cardboard and tri-wall boxes are kept, and soon was sending thick columns of acrid smoke above the bay. Because the ship was undergoing maintenance work when the fire erupted, its built-in flame-suppression system was inoperative, according to base officials.

After about 90 minutes, authorities decided to remove all firefighters from the vessel for safety reasons and battle the blaze by remote means, including helicopters and boats surrounding it on the bay.

The conflagration sent below-deck temperatures as high as 1,000 degrees and eventually left the ship listing due to the amount of water it had taken on due to the firefighting efforts, Navy officials said.

About two hours after the fire began, a blast of unknown origin shook the vessel.

No San Diego city firefighters "were on board the ship when the explosion happened, but the blast threw several firefighters off their feet," the municipal department reported.

Adding to the dangers posed by the inferno, the flames were burning several decks away from a section in the ship where a million gallons of oil are housed, Sobeck acknowledged Monday, though he expressed confidence that firefighters could keep the blaze away from that storage area.

As military and civilian crews made progress in quelling the inferno, Navy officials were able to determine that the 22-year-old ship had escaped complete destruction.

"First, we have investigated the four main engineering spaces (of the ship) and found no major damage," Rear Adm. Philip Sobeck told reporters Tuesday during a briefing at the naval base south of downtown San Diego. "There is no threat to the fuel tanks, which (are) well below any active fires or heat sources. The ship is stable, and (its) structure is safe."

A total of 40 sailors and 23 civilian firefighters have suffered various minor injuries, mostly heat exhaustion and smoke inhalation, while battling the blaze, according to Navy officials.

There were 160 sailors and officers aboard the ship when the fire broke out, Navy spokesman Brian O'Rourke said.

About four hours after the ship began burning, the Navy moved the USS Fitzgerald and USS Russell to berths farther away from the fire, according to Mike Raney, deputy public affairs officer with the Naval Surface Force.

What sparked the blaze remains unknown.

"Going forward, the Navy will do a thorough investigation of the incident, to assess the cause of the fire (and) damage to the ship," said Sobeck, commander of USN Expeditionary Strike Group Three. "But right now ... my focus and our focus remain putting the fire out and keeping our ship base safe."

Among the precautions in the area of the blaze instituted by the U.S. Coast Guard were a one-nautical-mile safety zone on the waters surrounding the ship and up to 3,000 feet in the air above it.

U.S. Coast Guard personnel also were assessing "environmental sensitivities and has contracted an oil-spill response organization to preemptively deploy protective boom to guard against any potential environmental concerns," according to a statement from the federal maritime agency.

Users of neighboring marinas were being advised to "utilize protective safety measures" as well, according to the agency.

Officials in National City, just south of the site of the fire, asked residents to remain in their homes as much as possible to avoid health hazards from the smoke billowing off the burning vessel. Likewise, the San Diego County Air Pollution Control District Office noted that if residents can smell acrid smoke, they should limit physical activity and stay indoors if possible.

The Bonhomme Richard is the third warship in U.S. naval history to bear the name, which means "Good Man Richard" in French and honors Benjamin Franklin's "Poor Richard's Almanac."

The vessel has been homeported at Naval Base San Diego since the spring of 2018, when it returned from a six-year port switch to Sasebo, Japan, while becoming the command ship for Navy Expeditionary Strike Group Seven.

A Message from the Commanding Officer:

We are continuing to engage in firefighting efforts and will continue to provide updates via our social media platforms.
There are currently no scheduled press conferences for the rest of today. pic.twitter.com/UrbbNqUOWC

RELATED: 21 injured in fire aboard ship at Naval Base San Diego