A handful of people took the stage to tell stories and remember the Dan Walters. 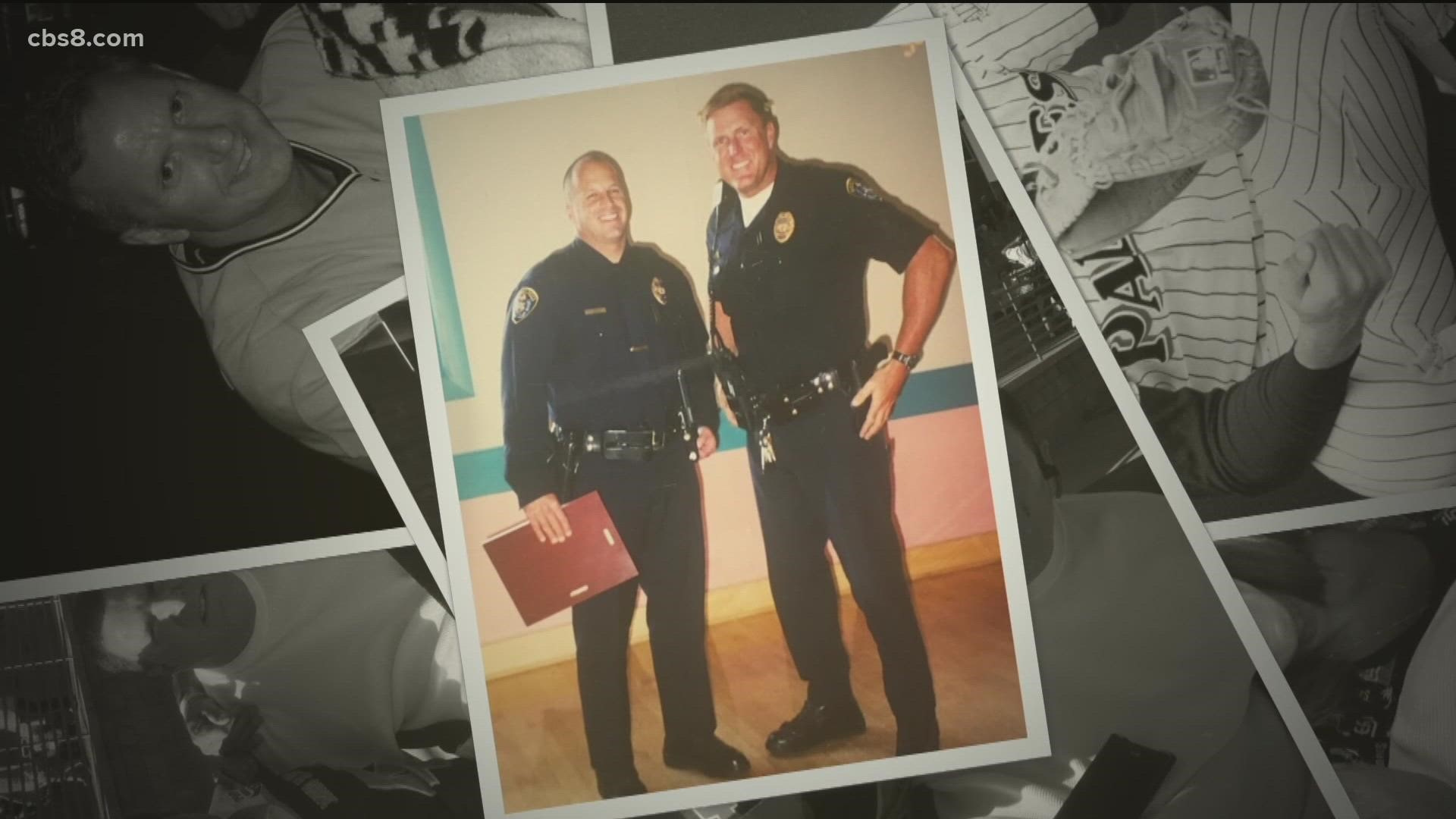 Because of the pandemic, Walters' memorial with full police honors was put on hold. In the funeral program, it said he died from complications from 2003 injuries.

"While time buries the pain we feel, we will never forget you and the times we were blessed to have you. I miss you every day. I love you Danny boy," said John Lammarino, retired SDPD sergeant.

Walters, who was born in Maine, graduated from Santana High School in East County San Diego in 1984. He was drafted that same year by the Houston Astros and later played as a catcher for the Padres for the 1992 and 1993 seasons. In 1993, a spinal injury ended Walter's baseball career.

"He always competed and he wanted to be where the action was," said Reggie Waller, MLB Scout.

In 1998, Walters became an officer with the San Diego Police Department. According to the San Diego Police Officers Association, he became paralyzed from the neck down after a 2003 shooting during a traffic stop that turned out to be a violent domestic disturbance in progress on 43rd Street in Southcrest.

Walters was struck in the neck by gunfire during the incident and fell onto the street, where a passing vehicle hit him, leaving him with two crushed cervical vertebrae.

The shooter was shot and killed by Walter's partner.

During the memorial, one of his mentors who said he turned into a father figure was overcome with emotion as he recalled the shooting and the day after in the hospital.

"He whispered to me, 'everything is going to be OK.' He was confronting me when he is in the hospital bed," said Bill Cahill, district attorney investigator.

Despite extensive rehabilitation during which he regained some movement in his upper body, Walters had to use a wheelchair for the rest of his life, according to the San Diego Police Officers Association.

The San Diego Police Department made announcements over their radios when Walters died and released a statement saying they lost "another hero who made the ultimate sacrifice." The department also shared details of Walter's life and career.

"Dan grew up locally, played professional baseball here in San Diego and proudly served his city as a police officer. He will forever be remembered by the members of this Department," the statement read in part.

When asked by the San Diego Union-Tribune in 2013 if he relived the incident in which he was shot, Walters said, "every day. Some days a lot worse than others."

Walters told the U-T about his struggles and pain after the shooting but also reminisced about his favorite moments serving as a police officer. He said he liked being able to help people in need and cited examples like getting women and children to a shelter.

He said he didn't regret being on the scene the night he was shot adding that maybe others were saved because of it.

Walters often called his friends and caretakers and nurses, "framily," they called him "a humble giant."

"He scoffed at the word 'hero' but that term is appropriate," said Amanda Donahu, Walters' caretaker.

Before he died, Walters told his friends that he never wanted to be forgotten.

"He literally took a bullet for all of us and fought and suffered for 17 years," said Sgt. Lorraine Tangog, SDPD. "He made the ultimate sacrifice for all of us and may he never be forgotten, may he rest in peace."

The San Diego Padres tweeted that they were "deeply saddened" to hear of Walters' passing last April.

We are deeply saddened to hear of the passing of former Padres catcher and San Diego Police Department officer, Dan Walters. Our thoughts are with Dan’s family. pic.twitter.com/o9CnZbbKjy

The SDPOA also paid tribute to Walters with a Facebook post when he passed away about his baseball and law enforcement careers.

“Jennifer and I were saddened to hear of the death of Officer Walters from injuries sustained in the line of duty in 2003. Unfortunately, Officer Walters’ life embodied the kind of tragic turn that our law enforcement officers know they may face.”

Today, the San Diego Police Department lost another hero who made the ultimate sacrifice: Officer Dan Walters. We would...