Of the dozens of people taken into custody, one was identified as an unaccompanied 15-year-old boy, according to CBP. 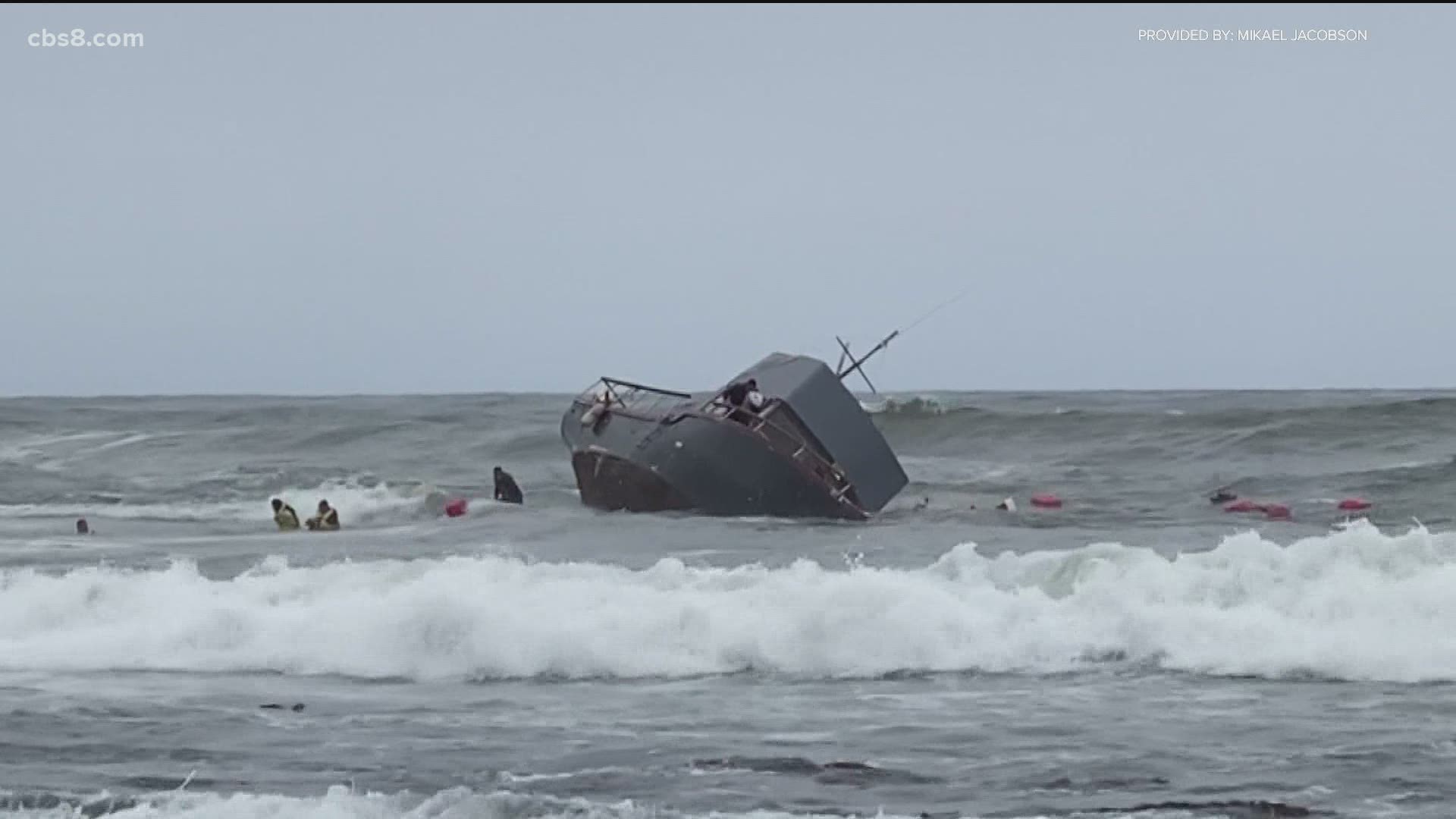 SAN DIEGO COUNTY, Calif. — At least 3 people died and approximately 30 others were injured Sunday after a suspected smuggling boat overturned off Point Loma near Cabrillo National Monument, according to the San Diego Fire-Rescue Department and multiple other agencies. SDFRD described the boat as a 40-foot cabin cruiser.

The total number of people aboard the boat appeared to be over 30 but agencies reported different totals throughout the incident and into Monday.

Emergency crews from multiple local and federal agencies responded to the scene near 200 Catalina Blvd. which was first reported around just before 10 a.m. on Sunday, according to SDFRD.

San Diego Lifeguard officials said the initial call came in as a report of a vessel adrift with one person on board. As lifeguards arrived on scene the boat had crashed into the shoreline, broken apart and 30+ people were in the water.

Of the dozens of people taken into custody, one was identified as an unaccompanied 15-year-old boy, according to Customs and Border Patrol.  The others were ages 18-39 and included 21 men and 6 women, according to that agency.

The Mexican consulate told News 8 on Monday that there had been 33 people on board the boat including 31 Mexican nationals, one person from Guatemala and the person piloting the ship who was of unknown origin.

Both the consulate and CBP said that three people did not survive the incident.

The consulate indicated that all survivors sustained injuries and said two were suspected to be minors which differed from CBP's findings.

Mikael Jacobson captured the chaos on video while visiting Cabrillo National Monument with his daughter.

“I didn't really realize what was happening until all hell broke loose,” Jacobson said.

He told News 8 that, at first, it just appeared to be a fishing boat with a few people on board. It turns out, dozens of people were packed inside the boat, hiding from view.

“There were two or four people on top and you just didn't think anything about it. Next thing you know, there are [multiple] people in the water and some of them are getting pulled out to sea," Jacobson said. 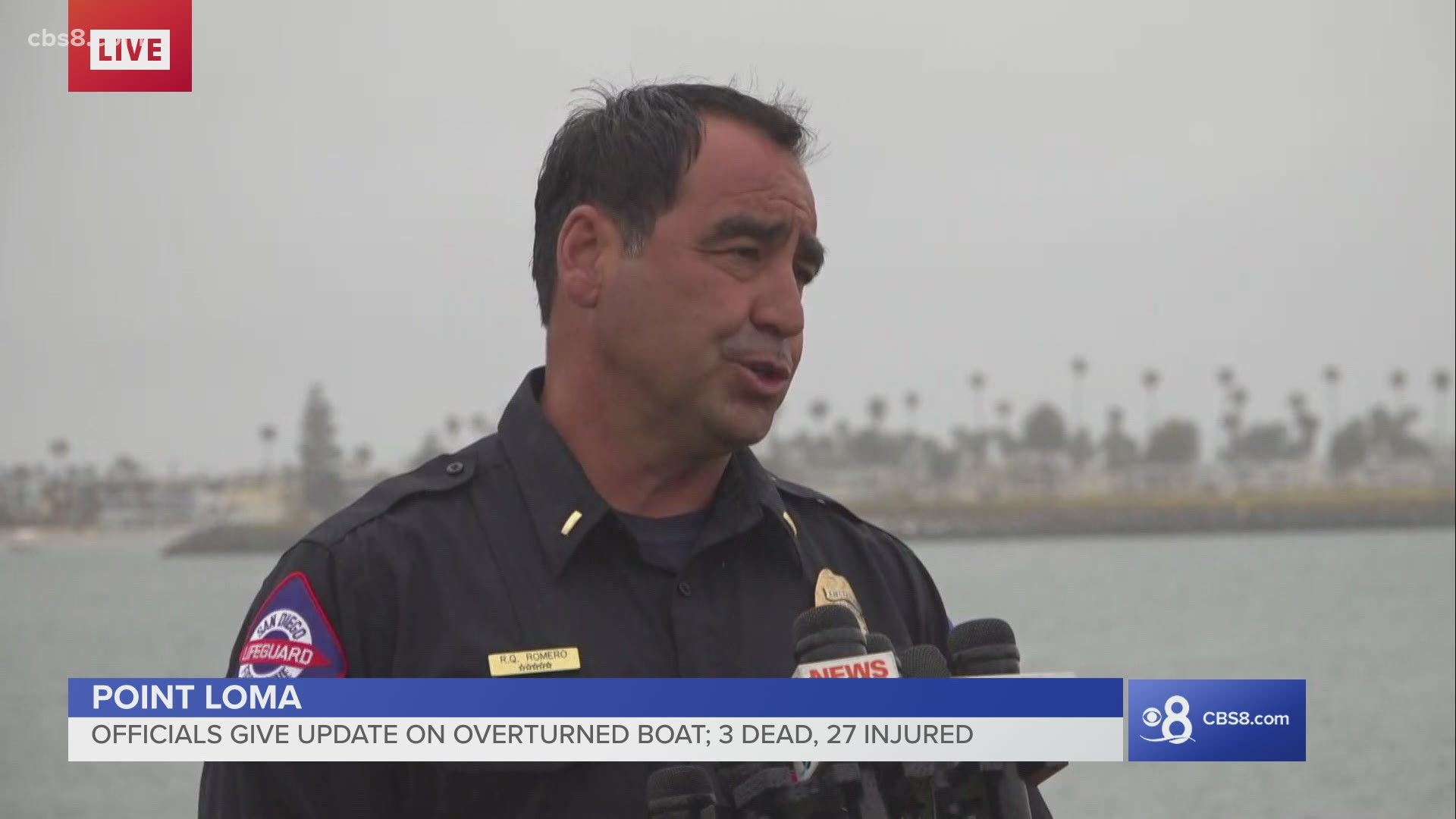 The Coast Guard continued to search for additional survivors through the night.  They announced that they had suspended the search operation on Monday around 11 a.m.

“After careful consideration using the information from our on-scene crews, partner agency input and the magnitude of the response efforts, the Coast Guard suspended our search on Monday morning,” said Captain Timothy Barelli, the Sector San Diego commander. “Yesterday, we were once again reminded how dangerous these ocean smuggling attempts can be and we will continue to work with our local, state and federal partners to prevent, detect and respond to cases like this to keep the waters of San Diego safe and secure.”

"Our goal was just to rescue everyone we can from the water and along the beach and get them safely transported to the hospital as quickly as we can," said Romero.

“In my 28 years - this is my 28th year of lifeguarding - I've never seen something that catastrophic happen,” Lt. Romero said.

He said lifeguards rescued several people from the water, unconscious, and said those who survived are very lucky that the incident happened so close to shore.

“If they were 50 yards a little bit to the west - in deeper water - I'm assuming that most of them can't swim very well - or not at all - and it would have been, really, multiple people in the water dead," Romero said.

Jeffery Stephenson of the Customs and Border Protection Public Affairs Office said the agency had every indication that the boat was a smuggling vessel being used to bring people into the United States illegally.

He described the boat as "severely overcrowded."

"[Smugglers] don't care about the people they're exploiting," Stephenson said.

According to San Diego Lifeguard officials, lifeguards pulled seven of the 30 people from the water and performed one cliffside rescue while the other surviving occupants from the boat swam to shore on their own. At least three did not survive and died on scene. It is believed that an additional person died later at a local hospital but that has not been confirmed.

"This was a mass rescue operation that turned into a mass casualty event," Gartland said. There was one major trauma and three people were treated with CPR, San Diego Lifeguard Chief James Gartland said.

The suspected smuggler was among those transported and was being questioned by Border Patrol officers, Stephenson said.

Lifeguard officials said there was a wide range of injuries and ailments being treated including hypothermia.

"It's a tragedy," said Gartland. "It's a tragic event here in San Diego. Probably one of the bigger vessel accidents, bigger calls that we've seen here certainly in my 26 years and certainly in Lt. Romero's 28 years - this is probably the worst tragedy."

As of Sunday afternoon, U.S. Coast Guard personnel continued to search the water off Point Loma for additional victims.

SDFRD firefighters and lifeguards, along with federal firefighters, U.S. Coast Guard and other local agencies worked together on the accident.

About 96 personnel were assigned to the rescue, including medics, fire engine crews and a chaplain.

The Mexican Consulate also released a statement via Twitter saying they are aware of this incident and are prepared to assist any possible victims.

Photos taken at the scene of the boat incident today. 40’ cabin cruiser broke up along the rocks inside the surf line. The @SDLifeguards cliff rescue veh was used to extricate one patient up to street level. pic.twitter.com/lQ54UdBWBG

Multiple agencies including @SDLifeguards rescued 25 people from the water. Sadly, two did not survive. 23 were taken to local hospitals. Federal agencies are still searching the water in vessels and aircraft.

Editor's note: The original story stated that 4 people had died from the incident, 3 on scene and another at a local hospital. The story was updated to state 'at least 3' have died while we confirm that there has been a 4th victim from those taken to the local hospitals.