How former San Diego residents are dealing with the snowstorm

Much of the state of Texas is still grappling with an intense snow storm. Some Texans have been in the dark since Sunday, including a Fallbrook military family. 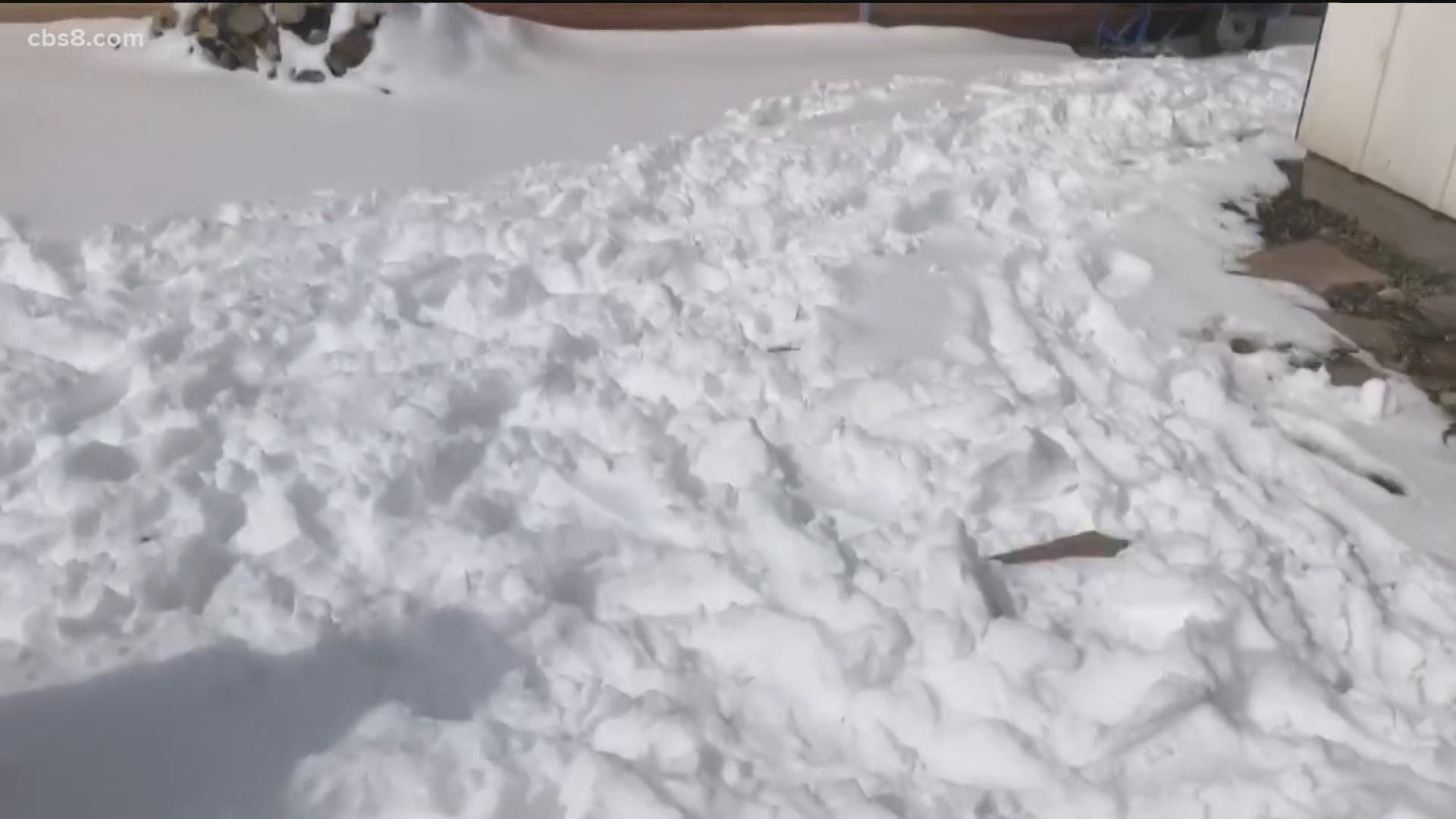 SAN DIEGO — Connie Saniel from Fallbrook says once her San Antonio home lost power in the middle of the night, she and her five children woke up freezing.

"We all slept in the same bed and just slept in layers and sweatshirts and blankets," Saniel said while wearing a turtleneck layered with her U.S. Navy sweatshirt.

Saniel says having no electricity has been tough, but the worst is not having running water, especially as her sailor husband serves the country out of state.

RELATED: VERIFY: Can you safely keep your food outside if the weather is freezing?

"Right now that we have power, we have been boiling snow in pots on the stove to have water because we have no water either. Our pipes are frozen, and we need to flush toilets and take showers."

One of her Saniel's sons made it to the grocery store and found empty shelves and crowds of cold people.

"They said there's a line of about 150 people outside the store apparently who need supplies," Saniel said.

In Austin, Fadi El-Assad said he measured about seven inches of snow, and in his 17 years in the city, he says he has never seen anything like this latest snow storm.

"We heard we were going to get some snow, but we didn't know it was going to be like this, we're really unprepared for stuff like this in Texas, we don't have salt trucks, and we don't have snow plows," El-Assad said.

El-Assad said he took the day off as a real estate home inspector and lead guitarist for Texas-based punk rock band The Riverboat Gamblers. He says his mother's power is out, so he has to brave the slick roads to pick her up.

Half of his Austin neighborhood is without power while the other half has it, so El-Assad  said he's been helping others by allowing them to come over and charge their phones.

Saniel says the cold snap has started a bartering system within her San Antonio neighborhood despite the pandemic.

“All the neighbors are sharing things like we ran out of wood, and we bartered with the neighbor who needed milk," Saniel said.

Pharmacist Dr. Derrick Foster in San Antonio says he barely made it home at night after driving on the snow-covered roads to get home. The power at his apartment complex has been on and off again.

Award-winning travel blogger Matt Kepnes has been in the dark for days in Austin, and by Tuesday, there was no change.

"As of right now, there's still no power, in my part of Austin and 42 percent they say is powerless. It's pretty life changing, you know, I came down south to avoid this weather," said Kepnes the Boston-native who moved to Texas 5 years ago from New York.

Known online as "Nomadic Matt," Kepnes says he is being just that by bouncing from his friend's places to use their electricity.

"With more snow on the way, I think I might not have power at all this week, which does impact me a lot because I work online. I’ll just be sheltering here. It's the first time I’ve ever broken out the scarf in Texas," Kepnes said.

Waiting this blizzard out, former San Diegan Saniel says she and her family will remain grateful.

"We're still kind of counting our blessings, but yes, I'm very jealous for everyone in California and not having to deal with this right now, it's a little crazy," Saniel said.