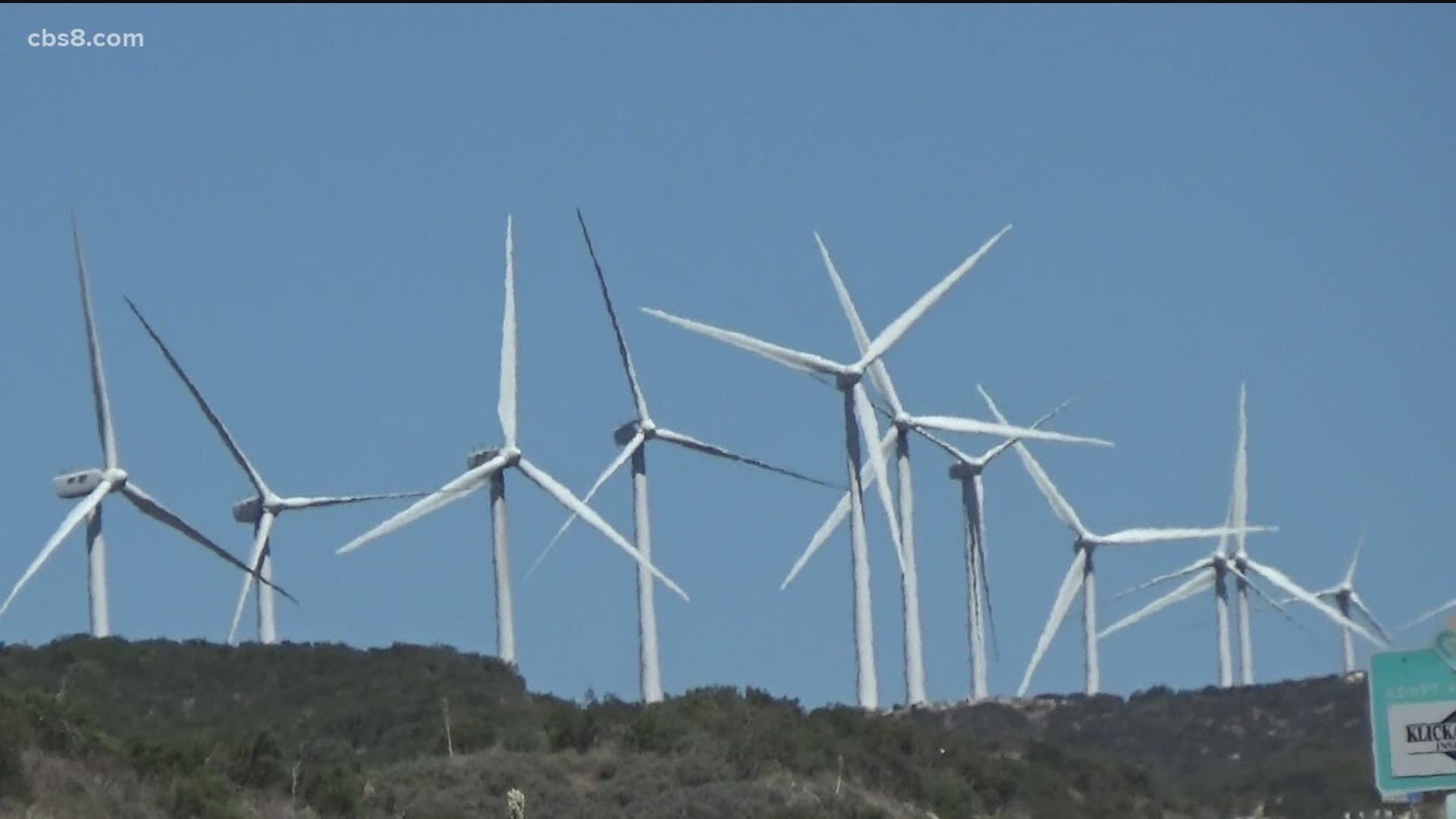 SAN DIEGO COUNTY, Calif. — One of the largest renewable energy projects to be proposed in San Diego County is snared in a second lawsuit alleging environmental violations.

At stake is a project to build 60 wind turbines on the Campo Indian Reservation as well as a substation and switchyard on private land near Boulevard.

East County resident Donna Tisdale and her group, Backcountry Against Dumps, sued this month in San Diego Superior Court to reverse the project’s unanimous approval by the county Board of Supervisors in March.

The lawsuit claims the county’s environmental review does not fully analyze how the project will impact noise, wildfire risks, golden eagles and groundwater in the area. It also claims the project goes against zoning rules.

Tisdale hopes the suit will stop the wind farm from being built.

“I wish that when people talk about wind turbines and solar projects that they stop and consider where they are proposed and how that will impact that community at ground zero,” she said.

Through a spokesperson, the county declined to comment on the pending litigation.

Developer Terra-Gen, which didn’t respond to a request for comment on the suit, says the Campo Wind project will provide clean energy to over 70,000 homes and tens of millions of dollars for the Campo Band of Diegueño Mission Indians. The tribe has agreed to lease land to the company for the turbines for at least 25 years.

Credit: Courtesy of San Diego County
The Campo Wind project’s location on the Campo Indian Reservation is shown on this map from San Diego County’s environmental review of the development.

Craig Pospisil, who leads the company’s wind development efforts, told the supervisors before they approved the facilities proposed for the private land that the project is “likely one of the single most impactful decisions within the county to fight climate change and mitigate its impact on some of our most vulnerable communities.”

Pospisil said the turbines would create enough energy to displace approximately 58,000 metric tons of greenhouse gas emissions a year. That’s about the equivalent of taking 12,600 passenger cars off the road, according to a U.S. Environmental Protection Agency calculator.

Before the supervisors voted, board Chairman Nathan Fletcher said few actions by the county receive unanimous support. He said it “warms my heart” to move forward with the project because it will help achieve a goal of 100% renewable energy, comes with a labor agreement and has tribal support.

Dozens of wind turbines already dot the sun-drenched and wind-swept ridges and valleys in the county’s southeast corner, including on the Campo reservation on Interstate 8.

More are in the works as renewable energy developers seek to meet California’s goal of 100% clean energy by 2045: Within 13 miles of the Campo Wind project, four solar projects and two wind projects are in the pipeline.

Besides 60 wind turbines, the Campo Wind project would add meteorological towers, a water collection and septic system, and transmission lines. The turbines would also connect to the electrical grid through a new substation and switchyard on private land northeast of the reservation, a project dubbed the Boulder Brush facilities.

Tisdale, a frequent player in fights against energy projects in the backcountry, lives with her husband, Joe, on a ranch in Boulevard that shares a half-mile boundary with the reservation and the proposed wind project. She likes to say they have lived a combined 100 years in the area.

Tisdale spoke to county leaders about her concerns in public meetings as the chair of the Boulevard Community Planning Group, which advises the county on land use decisions. But when the supervisors approved the project, she said, they didn’t even mention the burden on the community.

Her latest lawsuit is the second she and her husband have filed over the wind project. Last July she sued in federal court, claiming the U.S. Bureau of Indian Affairs violated the Bald Eagle and Golden Eagle Protection Act, the Migratory Bird Treaty Act and the National Environmental Policy Act when it approved the Campo tribe’s lease to house the turbines.

The judge has set a hearing in the case for May 13.

Tisdale also has successfully petitioned the Federal Aviation Administration to reconsider its earlier determination that the 586-foot turbines would not cause a hazard for air navigation. The agency told Tisdale’s lawyer in a December letter a new review will be done because of past “errors in the aeronautical study process.”

Marcus Cuero, chairman of the Campo Band of Diegueño Mission Indians, said the opposition from Tisdale and some members of his tribe has made the process cumbersome and is delaying the project from getting built.

“I don't understand the whole rationale on why they're opposing it,” he said. “In my opinion, this adds value to the community.”

The tribe voted to approve the lease, which has not been publicly released, in April 2018.

As of March, Terra-Gen had already paid over $1 million to the tribe and was scheduled to make another payment this month. It also has awarded 15 education scholarships and given 14 tribal members jobs, according to court records.

Cuero told inewsource he sees the development as an opportunity to fund tribal priorities like internet access, housing, health care and education, although no plan has been set for how to spend the lease revenue.

“We want to be self-sufficient, and I think this project helps us in the right direction to better self-governance,” he said.

But not all of the Campo tribe’s 310 members support the lease.

After the tribe voted, Michelle Cuero, whose husband is the chairman’s brother, helped write a petition against the wind project that 65 tribal members signed. They contend they didn’t have a proper say when the tribe approved the lease.

For Cuero, the opposition is personal. She said wind turbines are expected to tower over her home, disturbing the property she inherited from her father and had planned to pass down to her four children and 10 grandchildren, most of whom live on the reservation.

“What I want is our land,” she said. “They’re not going to pay us enough money to relocate and give up our reservation to move somewhere else. How can we do that? So my deal is just stop it and let us live and let live.”

A Superior Court hearing on Tisdale’s lawsuit against the county is set for Dec. 10.